Liam Öhgren is a new-age power forward: Realistic options for the Canucks at 15 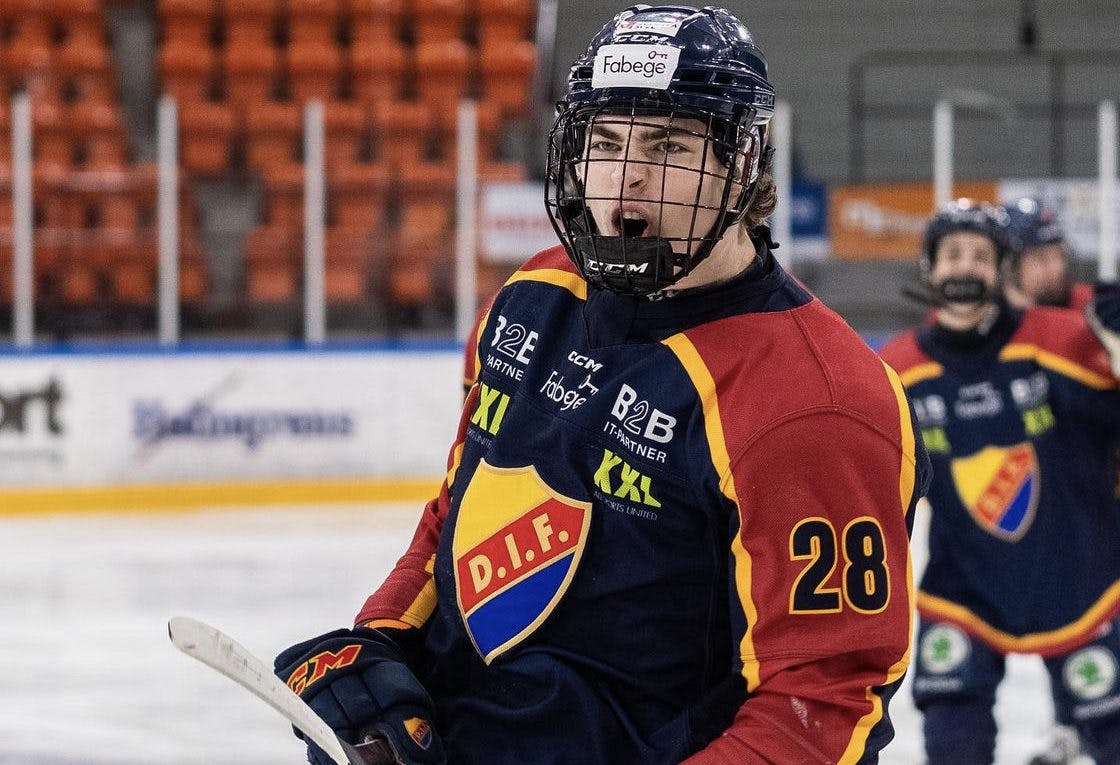 By Faber
4 months ago
Liam Öhgren plays a well-rounded game with strengths that should allow him to quickly become a sturdy pro in North America.
The offensive winger dominated the Swedish junior hockey circuit with Djurgårdens IF this past season. He is an elite finisher who can score from anywhere on the ice and never backs down from driving to the dirty areas to clean up loose pucks.
Öhgren plays the game like a power forward, even if he isn’t 6’4″. And honestly, this type of player might end up being the new-age power forward. He plays extremely hard in the offensive zone, cleans up garbage around the net, and uses his strength to body-up on defenders as he looks to win board battles.
There’s a lot to like about Öhgren that makes him a serious option for the Canucks at 15. Let’s dive into his game.

We mentioned that Öhgren has a power forward feel to his game and that comes from how he can utilize his big frame and strength.
Öhgren comes in at 6’1″ and weighs over 200 pounds. He plays left wing and spent most of his season playing in the Swedish J20 Nationell league, producing at a record-breaking rate.
He scored 33 goals in 30 games and added 25 assists to give him 58 points with Djurgårdens’ J20 team in the 2021–22 season. That production translates to 1.93 points per game. While his scoring rate is very impressive, what might be more exciting is that he scored 28 of those 33 goals at even strength.
Öhgren doesn’t rely on power plays to create offence, he goes out and creates it at five-on-five — something that will bode well for him as he looks to quickly become an NHL player.
The production came from Öhgren’s willingness to outwork the opposition more than it came from him simply being a much more skilled player than his competition in the J20 leagues. Öhgren has a lot of skill, but what we liked in watching his goals was how much more he was moving his feet, being aggressive, and going to the net with authority.
Öhgren’s shot is excellent — we will get to it more in the “strengths” section — but his production didn’t come from being the most elite skilled player in the league, it came from him having elite skill combined with working harder than the competition. 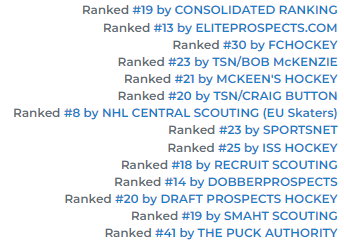 You can’t talk about Liam Öhgren without mentioning his shot. It’s not the most dynamic shot of the draft but there is an argument to be made about him being one of the most consistent shooters, and he doesn’t rely on just being a one-trick pony who only scores from one area of the ice. Öhgren looks dangerous from the slot, the left half-wall, and the right side of the ice on a one-timer. You’ll see all of these in the long highlights package I put together.
Physically, he is nearly NHL-ready at this current date. His skating technique is good, his strides are powerful, and he’s already tipping the scales over 200 pounds. Öhgren is mature enough to believe that the NHL is not far away for him. He is set to play next season in the Allsvenskan and should get a lot more minutes in Sweden’s second-tier pro league.
There is only one more year on Öhgren’s Swedish contract and from everything that we’ve seen in his game, it would be shocking if he wasn’t in North America for the 2023–24 season. This is a prospect who is on a fast track to the NHL and his size and energy give him a good chance to slot into a fourth-line role and work his way up as his confidence grows.
Öhgren also showed the ability to adjust his game to the SHL level. He dressed for 25 games with Djurgårdens’ top club and averaged 6:59 of ice-time over the SHL season. He has to play more of a dump and chase style in the SHL as a part of the fourth line but it seemed like he was even more focused on playing well defensively when he participated in Sweden’s top league. He didn’t look out of place physically and though his offence didn’t shine as it does in the J20 league, he was still going to the net hard.
Djurgårdens was one of the worst teams in the SHL this year and ended up being relegated to the second-tier Allsvenskan league for next season. The demoted likely means that Öhgren will get a ton more ice time next year as some of the team’s veterans look to sign with clubs that remained in the SHL.
This should open the door for Öhgren to take on more of a challenge than he saw in the J20 league. It’s a good step for his development and could very easily be enough to help transition him to the AHL or NHL in the 2023–24 season.

Grab a snack or a coffee, sit back and take a look at 20 of Öhgren’s goals from this past season in the Swedish J20 league — as well as a couple from the U18 World Championships.

Öhgren is a bit lower in many of the rankings out there, but his floor is also very high. Similarly to Danila Yurov, there’s not a lot to dislike in Öhgren’s game. He already looks like he has an NHL body and he skates well and goes to the net hard.
We don’t want to say that this is a safe pick but you’re not exactly swinging for a first-line talent with Öhgren. What you are getting is a player who looks like he will be versatile on the power play and could be used in many different parts of the ice. You’re also getting a player who thrives at scoring at even strength, which is one of the most difficult things to do in the NHL.
Öhgren would immediately become the Canucks’ top prospect by a mile and with him set to start next season in the Allsvenskan, he should be given a lot of ice time to continue to develop his game at a higher level. It would be great if he was a centre but there are so many intangibles in his game to like that it wouldn’t surprise us to see the Canucks use to No. 15 pick on Öhgren.
Trading down a few picks and snagging Öhgren might be an option if there are a couple of big-name prospects who slide to the Canucks at 15 like Brad Lambert, Jonathan Lekkerimaki, Joakim Kemmel, or Matthew Savoie. The Nashville Predators, Los Angeles Kings, and Washington Capitals might be some teams to look at in this case should the Canucks want to trade down to 17, 19, or 21 to select Öhgren while adding another second or third-round pick.
More from CanucksArmy:
Uncategorized
Recent articles from Faber