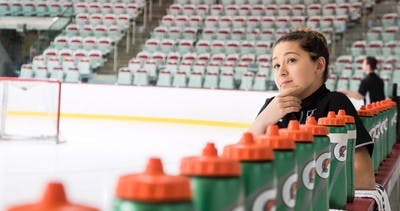 By Zach Laing
1 year ago
The Vancouver Canucks have added Rachel Doerrie to their analytics department.
Doerrie , 25, has spent the last three seasons as a director of analytics and director of advanced performance for York University’s men’s and women’s teams for the last three years.
Prior to that, she spent a season and a half as an analyst within the New Jersey Devils.
On top of her role at York University, Doerrie had been working in media for The Nation Network’s Daily Faceoff as well as co-hosting the Staff & Graph podcast.
Zach Laing is the Nation Network’s news director and senior columnist. He can be followed on Twitter at @zjlaing, or reached by email at zach@oilersnation.com.
Uncategorized
Recent articles from Zach Laing