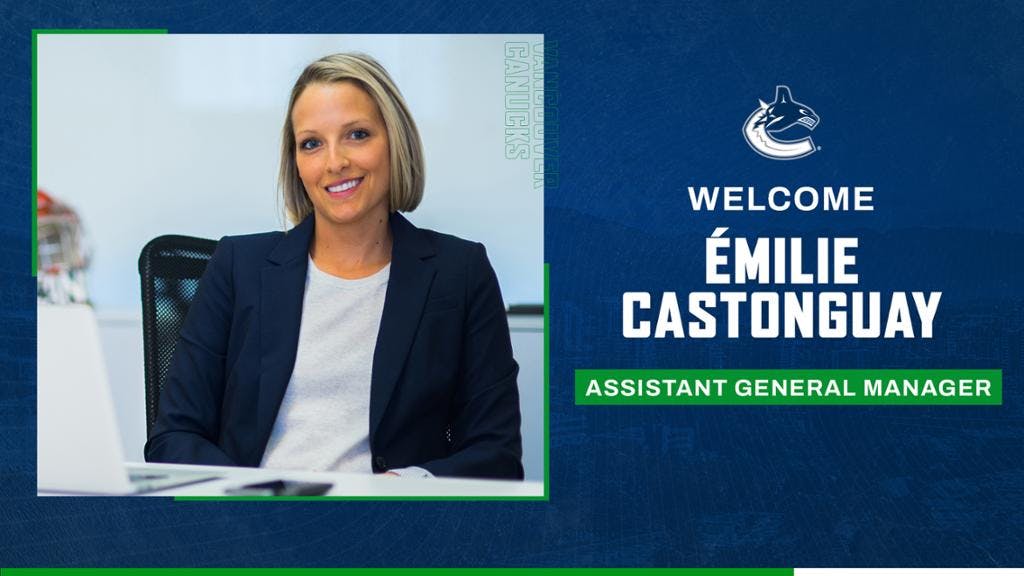 By David Quadrelli
10 months ago
The Vancouver Canucks have added to their front office in the form of another assistant general manager.
Émilie Castonguay has been hired as an AGM, president of hockey operations Jim Rutherford announced Monday morning.
Castonguay was the first woman to be an NHLPA-certified agent, and represented New York Rangers forward Alexis Lafreniere, along with former Canuck Antoine Roussel — the latter of which would indicate she knows how to take advantage of other GMs around the NHL.
She’s also the first female assistant general manager in Canucks history.
“Émilie has extensive experience, is driven to succeed, and has a strong reputation in hockey for her intelligence and work ethic,” said Rutherford. “She will play a lead role in player contracts and negotiation, managing the collective bargaining agreement, and her voice will be heard in all aspects of hockey operations. She will be a key member of our leadership team and we are pleased to welcome her to Vancouver.”
Rutherford stressed the importance of hiring people with diverse backgrounds and experiences into an NHL front office when he was first asked about it when hired by the Canucks.
Named one of the 25 most powerful women in hockey by Sportsnet in 2020, Castonguay played four years of NCAA Division 1 hockey at Niagara University, where she graduated with a bachelor’s degree in finance in 2009 and won a National Scholar Athlete award for her success both on the ice and in the classroom. Following her studies at Niagara, she earned a law degree from l’Université de Montréal in 2012 and is a member of the Quebec Bar Association.
“It is an honour to join the Vancouver Canucks and I am grateful to Jim and the Aquilini family for the opportunity,” said Castonguay. “The Canucks have a passionate fanbase and an exciting young team with a bright future. I can’t wait to help build a winning organization that continues to grow and challenges for championships.”
Castonguay will meet with the media at 1 PM today.
More from CanucksArmy:
Uncategorized
Recent articles from David Quadrelli