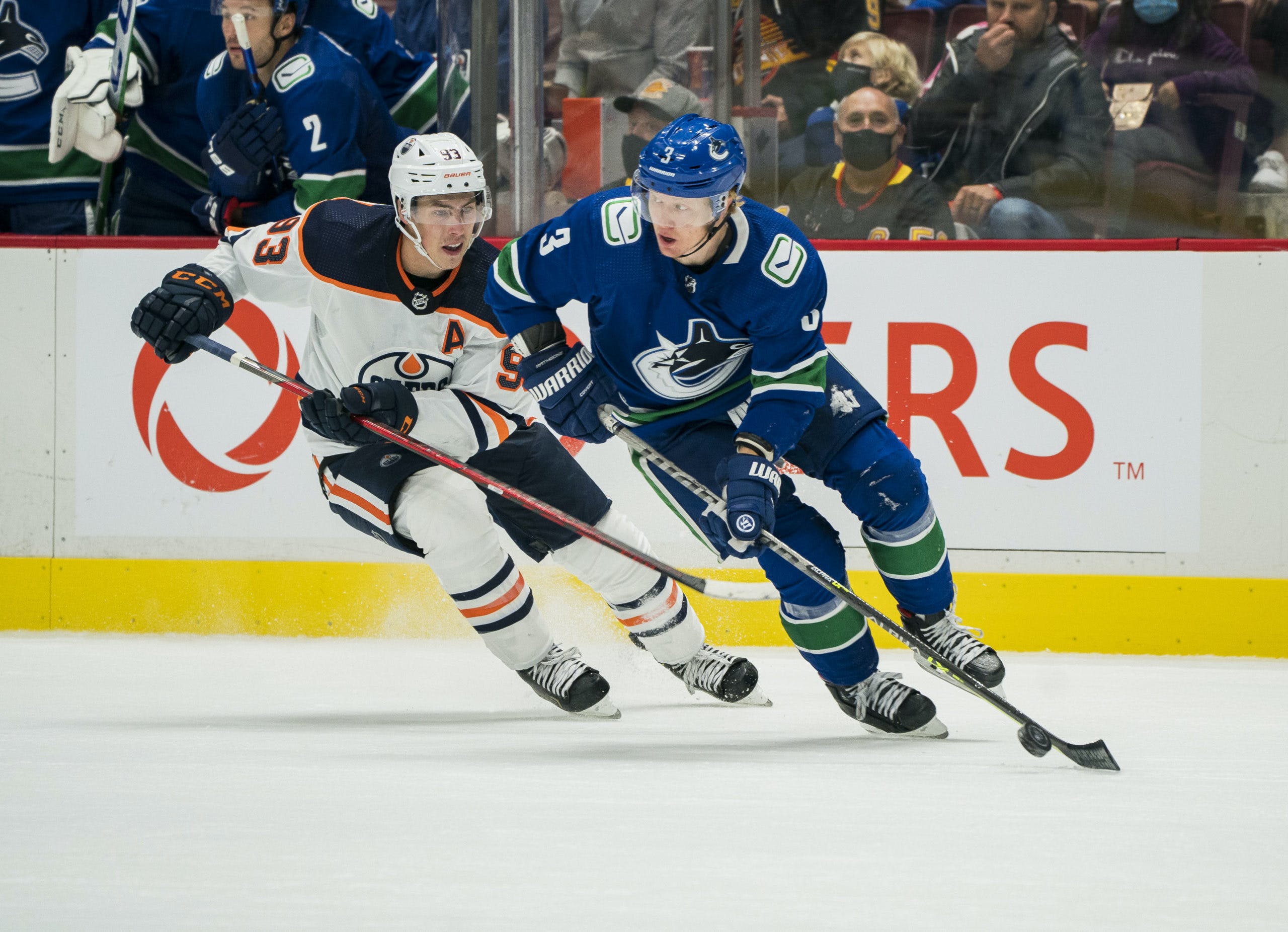 By Faber
11 months ago
One of the big worries about the Vancouver Canucks’ roster is their weakness on the back end.
Their defencemen aren’t known for being great defensively but that weakness can be shielded by Bruce Boudreau’s up-tempo style of play.
The addition of another puck-moving defenceman in Jack Rathbone will make all three defensive pairings have the capability to move pucks out of their own zone. With Rathbone back into the lineup, all three pairings will have at least one defenceman who fans can be confident in the offensive abilities of.
The latest that we have heard about Rathbone is that he is very close to returning from injury. It’s possible that he makes his return to the Abbotsford Canucks’ lineup on December 30th. After a few AHL games to get back up to speed, the Canucks should absolutely call up Rathbone to play on their third pairing. His aggressive style of playing defence fits perfectly with the pace that Boudreau expects from his defencemen. Rathbone takes risks and Boudreau has the coaching trait of being able to add confidence to a player’s game — this is exactly what Rathbone needs.
This NHL year has been harsh on Rathbone. In his nine games and 124 minutes, the team was only able to score one goal on 64 shots. That’s a team on-ice shooting percentage of 1.56%. Rathbone’s ice time had the team getting a disallowed goal, multiple posts and just was not getting any luck in his nine-game stint earlier this season. 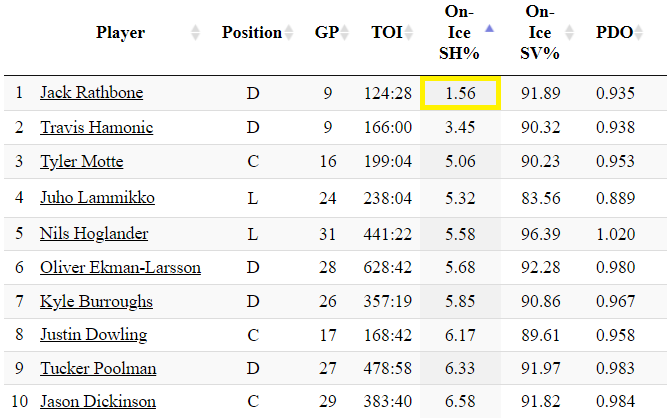 On-ice percentage stats provided by NaturalStatTrick.
He went down to the AHL and played a ton of minutes before being injured with what we believe was an upper-body injury and more specifically in the shoulder area. Rathbone most definitely wants another run at the NHL this season and it shouldn’t take an injury. He is the ideal third-pairing left-shot defenceman for Bruce Boudreau.
Rathbone will have the chance to play with one of Travis Hamonic, Tucker Poolman, or Luke Schenn on a third pairing. This depends on if Schenn stays with Quinn Hughes or if Hamonic goes back to playing with Hughes after the break. Hamonic skated with the group before the break and we are under the assumption that he has the status of a fully vaccinated player at this point in the year.
With Schenn playing well under Boudreau, it’s not out of the realm of possibility to believe that Poolman could be a healthy scratch less than half of a season into his four-year contract.
Boudreau has not been able to see a lot of the Oliver Ekman-Larsson and Tyler Myers pairing but that duo has been surprisingly good together this season with a style that fits Boudreau’s upbeat system even more so than it did with Travis Green. Boudreau has only had a healthy OEL and Myers for half of his six games as the coach. Even so, one of those games saw Myers have to move up to play with Hughes and saw them have to play with five defencemen on multiple occasions.

Defence pairing stats under Boudreau provided by NaturalStatTrick.
My ideal defence core moving forward does have Poolman as a healthy scratch.
Once Hamonic is healthy, he makes sense to go back with Hughes and Schenn has outplayed Poolman ever since Boudreau has come in. I’d like to see Schenn play with Rathbone, go back to OEL-Myers and see how Hughes-Hamonic looks under Boudreau.
You’re confident in the puck-moving from your left side and can deal with the defensive-minded partners on your first and third pairings in this format. Brad Hunt and Poolman are you extra defencemen and you have to start feeling better for Boudreau, who has had to deal with some worrisome defence groups in his six games as the Canucks’ coach.
It makes so much sense for Rathbone to be added to the NHL roster as soon as he gets his feet under him with a couple of AHL games. One of Rathbone’s strengths defensively is his ability to attack the opposition at the blue line before they enter the zone and that is one of Boudreau’s requirements for his defencemen. A little step towards the opposition when they approach the blue line forces the player to make a quick decision or have the puck stripped and this will fit well with Boudreau.
With the strong play from Myers and Hughes, you feel a bit better about the top-four, and having Rathbone get some easy matchups as the third-pairing defenceman will give him the chance to activate into the offensive zone more and please his coach with his puck-carrying ability. This all depends on Rathbone’s health but I heard before the Christmas break that he was very close to returning to action and was questionable for Abbotsford’s scheduled games against Tucson on the 22nd and 23rd.
Once the Canucks return to the rink, one of the first questions we will be asking is what Boudreau’s knowledge of Rathbone is. He must have been filled in about the young defenceman by now and the hope is that Rathbone is now healthy and can make his way back up to the NHL sooner rather than later. This is likely the outcome as we will probably see more COVID cases in the future and with Abbotsford down the road, Rathbone can be up with the team quickly.
Even without any potential COVID cases in the near future, once Rathbone gets a couple of games under his belt, the Canucks organization needs to get him up to the NHL relatively soon. The new coach has the team playing a style that fits like a charm with Rathbone. He was struck with the bad luck bug in his nine games this season but will have a boost to be back with the new coach and a hunger for the NHL after another AHL-stint.
It’s time for Rathbone to be in the NHL and he could be somewhat of a Christmas gift to Boudreau and his defence core.
Uncategorized
Recent articles from Faber