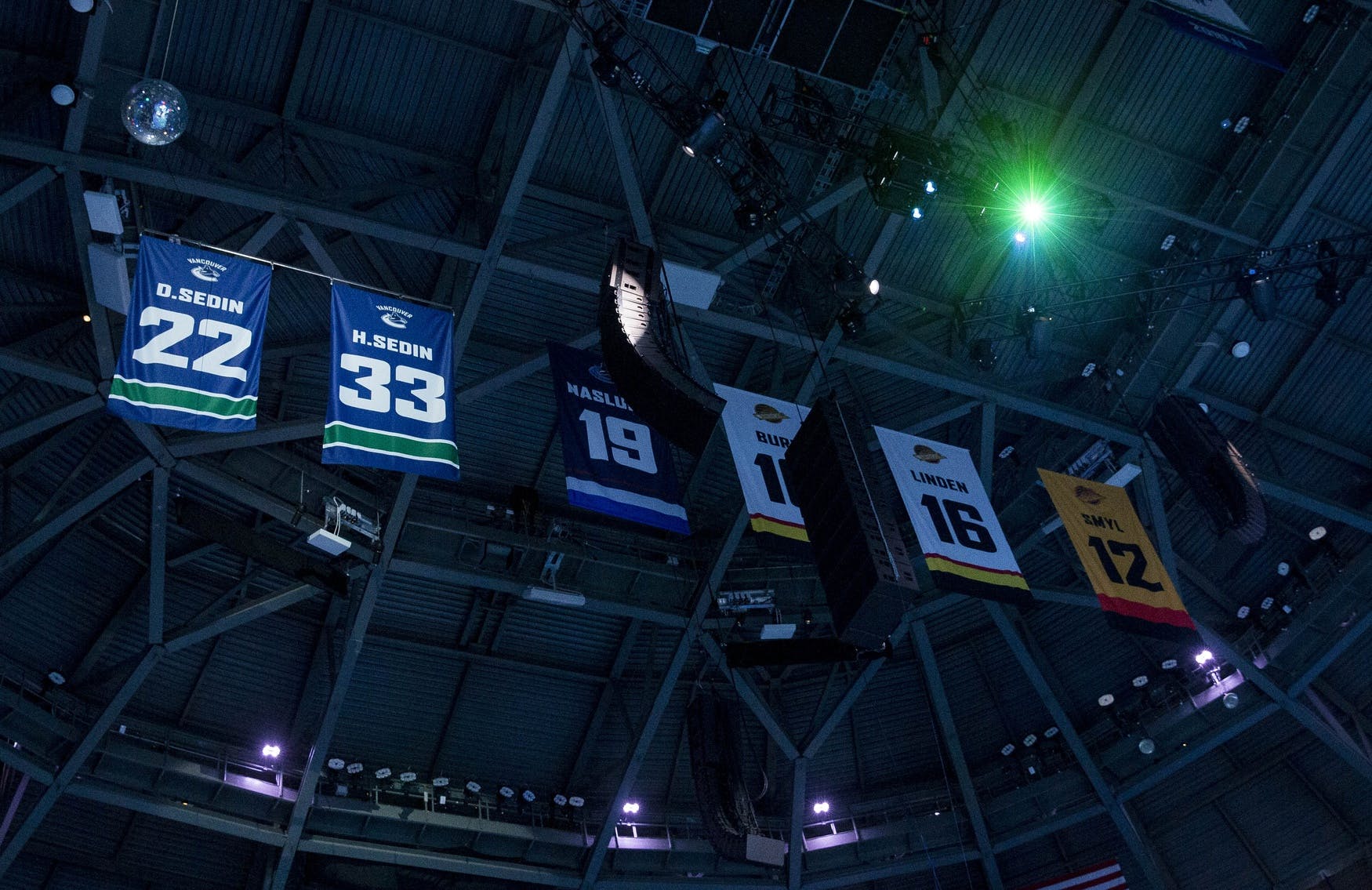 By Stephan Roget
1 year ago
With the semi-simultaneous firing of GM Jim Benning, AGM John Weisbrod, and coaches Travis Green and Nolan Baumgartner, the Vancouver Canucks signalled the end of an era.
But with the announcement of a quinumvirate committee to replace Benning and Weisbrod in the front office on an interim basis, ownership also signalled that they’re not ready to get started on the next era quite yet.
And that’s perfectly alright.
There’s plenty of good to be found in the Canucks’ temporary five-headed managerial monster. Henrik and Daniel Sedin were destined for a loftier gig eventually. Chris Gear brings a wealth of experience on the business side of the sport. Stan Smyl is always an excellent choice for a public-facing role, especially during a period of time where positivity will be vital.
If there’s a next-GM-candidate to be found amongst the group, it’s in Ryan Johnson, who has served as the Canucks’ director of player development since 2015 and as their AHL GM since 2017.
It’s a solid collaborative team. Not one that anyone expects to stick around for any length of time or to make any major hockey-related decisions — there’s a reason why “designed by committee” is a pejorative term — but one that can absolutely hold the fort down for the time being, for as long as the time being needs to be.
Eventually, the Canucks will want to shift from the committee and commit to a long-term management team; ideally, one that includes both a President of Hockey Operations and a General Manager. This team will need to be entrusted with designing the long-term future of the Canucks, and that’s not a responsibility that can be taken lightly.
The Canucks organization needs to ensure that it selects the right people for the job. Fortunately, as we’ve already stated, they’ve now got the opportunity for patience and diligence.
There are hopes that incoming head coach Bruce Boudreau can spark a quick turnaround in the 2021/22 Canucks and put them back into the playoff picture. If that happens, the Canucks would probably want a more permanent management team in place to start making decisions on roster movement. Rental trades, contract extensions, and the like are not the sorts of things a franchise wants to be doing without a long-term vision locked in.
But that playoff picture is a long way off. As of this writing, the Canucks are seven wins back of .500 hockey, never mind the final wild card spot in the Western Conference. Boudreau will have to lead them on a truly epic run for the postseason to even become a conceivable outcome.
If that happens, excellent. But until it does, the Canucks don’t have much incentive to make moves.
On the one hand, they’re already “all-in” enough on the 2021/22 season thanks to Benning’s offseason transactions — some might even say they’re too “all-in.” At the very least, there’s absolutely no reason at all to make any “win now” moves until the team has climbed the standings.
On the other hand, there’s also no reason to start selling off pieces and tanking even further until there’s been a chance to see how the team responds to Boudreau. Clearly, there is at least some optimism toward a bounce-back, otherwise, a coach of Boudreau’s stature would not have been brought in at this juncture. Boudreau deserves a full opportunity to see what he can do with the current set-up.
Which means, player movement-wise, the Canucks are at a bit of an impasse. Which, really, is exactly where they want to be while the five-headed collaborative GM is in place.
The quick response to the chanting of Rogers Arena likely bought a lot of extra patience from the fanbase. The hiring of three franchise icons for the interim group probably covers any more that’s required. The boos are done for now. The time will be given.
There is a time limit on this whole situation, and it’s probably the 2022 Trade Deadline, which is slated to occur on March 21, 2022. The Canucks probably don’t want to go through a potentially-consequential Trade Deadline without a new GM in place, and they’d ideally want to hire one with at least a month of prep time leading up to that fateful day.
But the Trade Deadline is more than three months away. At maximum, the Canucks have until sometime in late February to find their next showrunner(s) — and they should use as much of that time as possible their selection is a sound one.
There’s actually a perfect date coming up for a transition of power, and that’s the 2022 Olympic Break. The Canucks do not play games between February 2 and February 23. If the new GM, POHO, AGM, and whoever else are officially introduced in early February, they’ll have three full weeks on the job before any game action, which is ample time to get settled, establish themselves with the players, and start getting ready for the Trade Deadline.
Call it a mini-offseason.
Until then, the quinumvirate will reign. But even if the interim managerial team doesn’t make any moves of any significance, know that they will still serve a vital purpose: buying enough time to prevent ownership from rushing the most momentous decisions of all.
Uncategorized
Recent articles from Stephan Roget