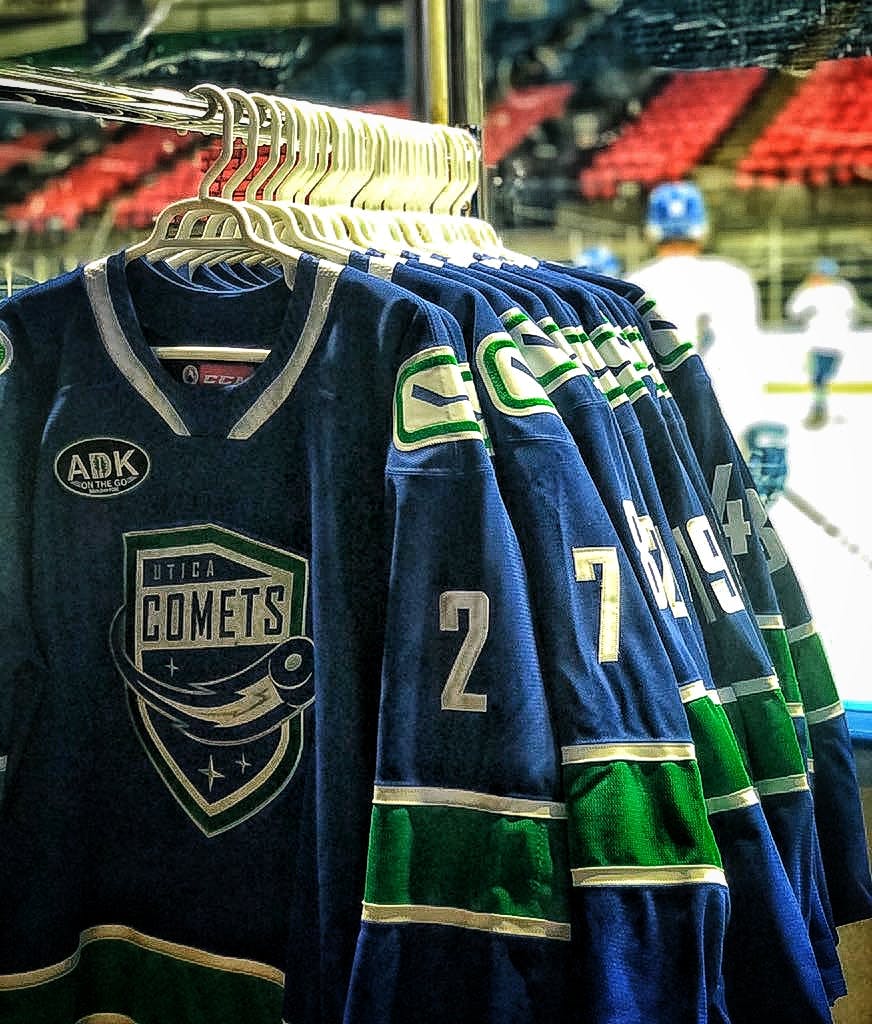 By Cory Hergott
1 year ago
Yesterday’s media availability had a distinct St. Louis flavour as we had access to Comets’ new Associate Head Coach, Drew Bannister and forward Sam Anas who led the AHL in scoring last year. That didn’t stop us from getting some Vancouver related content from them, though.
Here are our five takeaways from today’s Zoom call.
Two Organizations/One Team
After speaking with Trent Cull on Tuesday and Bannister today, it has become very clear that the Canucks and Blues will be doing their best to coach this group as a proper team and not as a “split squad.” It’s early still, but it sure does sound like this is a group that wants to have everybody pulling on the same end of the rope, right from day one.
Sam Anas echoed that sentiment when he said that the players aren’t looking at themselves as “Vancouver players” and “St. Louis players.” He told reporters that they are all wearing Utica Comets gear now and that is the team that matters. He went on to say that everyone there has the same goal to get to the NHL level and that is their focus.
This isn’t a situation where we will see Trent Cull and Gary Agnew only working with Vancouver players and Bannister and Daniel Tkaczuk only working with St. Louis players. The coaching staff from both organizations will be working with all of the players.
That seems like a good thing to me. All coaches have areas where they are stronger and areas that could use a bit of work, just like the players in their charge. To have some new voices blended with the existing ones could potentially give some of the Canucks’ prospects that extra edge or push to get to the NHL level.
Familiar Faces
I asked Bannister if he had any previous relationships with any of the Vancouver prospects, or if he had knowledge of them before coming into camp.
It turns out that Bannister does have a bit of experience coaching a couple of guys and coaching against another.

“I coached Jonah Gadjovich in my first year in junior when I was an assistant with Owen Sound, so I know Jonah very well. I had him for one year before I left for the Soo, (Greyhounds OHL) to become the head coach there.
Then there are guys like Mitch Eliot who I saw playing with Sarnia when I was in the Soo. There’s also Jett Woo, who I had at the teens when I was the head coach at the Canada Winter Games. You know he was, I guess, 14-years-old at that time because it was a 15-year-old tournament. So I know Jett very well from coaching him and seeing him a little bit.
Other than that, you know, it’s a lot of new faces for us, but a couple of familiar ones that I have certainly coached or have seen play against. Overall, I think it’s an exciting group and there are some really good young hockey players out there.”

It’s good to know that some of Vancouver’s prospects will already have some experience with one of their new coaches, and it sure sounds as though the ones who don’t have that familiarity will still be in good hands when Bannister is doing his part.
Who Stood Out
We know which players Bannister had some familiarity with before coming into this season, but what about the players with which he was less familiar? Were there any guys who seemed to jump off the page for him over the first few days of camp?

“You know, I think I’ve been impressed so far by Kole Lind and I’ve been impressed by the Lockwood kid, (Will Lockwood). He’s, (Lockwood) just a really good skater, you know, he’s got explosive speed. In speaking with Trent, one of his priorities is to really work with him on the penalty kill and turn him into what will hopefully be an NHL special teams guy. Lockwood is an important player… all guys are important, but I know that for him being in his first year of pro that Trent’s gonna really take some time with him to develop him into the right kind of player and the right kind of person.
Sven, (Baertschi) is another guy I’ve seen play obviously at the NHL level but never had the opportunity to coach him. I’ve had the opportunity to kind of talk with him over the past three days. There’s a lot to like about him, he’s an outstanding person. He’s come here with the right attitude. I’ve coached players in those situations and sometimes they don’t come in with the right attitude. Sven has come in with the right attitude and is ready to work and that rubs off on some of the younger guys and shows that he has some really good leadership skills. That’s good to see from a person in his situation.”

I don’t want to read too much into that statement, but I suppose that it is possible that Sven could leave a good enough impression on the Blues organization to maybe find an NHL landing spot for next season… or maybe even sooner? Playing this season in Utica certainly leaves him on the right side of the border for a call-up to St. Louis if some sort of trade can be arranged.
Coaching Roles
I noticed in his statement about players who have stood out to him that Bannister mentioned how Cull wanted him to work with Will Lockwood to help him become a reliable penalty killer. That led to asking if Bannister would be looking after the Comets’ PK this year, an area that is usually Gary Agnew’s forte.
Drew cleared things up by saying that Agnew will still be looking after the team’s penalty kill and that the power play is where Bannister will be taking charge. Jason King, who is now with the Vancouver Canucks coaching staff, had previously looked after the Comets power play, so it will be interesting to see what new wrinkles if any that we will see this season when the Comets are up a man.
The coaching titles in Utica are also kind of interesting this season. Trent Cull is still the club’s Head Coach. Gary Agnew has traditionally been listed as his Associate Coach and this year we have Drew Bannister being listed as Associate Head Coach. At the end of the day, I don’t think that it matters what title each person has because everything that I have seen so far from the coaches involved suggests that this will absolutely be a TEAM endeavour this year.
Sam Anas
The only player who we had access to today was Blues prospect, Sam Anas. Anas was signed by the Blues this offseason after blowing up the AHL with a league-leading 70 points. For what it’s worth, 50 of those points came in the form of assists and with Anas lining up on the right side of Kole Lind and Sven Baertschi, I would suggest that the Comets will have one of the more exciting first lines to keep tabs on in the AHL this year. So far at least, people will not be able to whine about who Kole “is stuck playing with” for the upcoming campaign.
I asked Anas if he had previously known anyone in Vancouver’s system or had some familiarity with anyone. He said that he knows Brogan Rafferty as both are alumni of Quinnipiac in the NCAA. They weren’t there at the same time, but they have trained together at Quinnipiac. Anas went on to say that Rafferty has given him the heads up on how Utica is and where the good restaurants are, etc.
With Anas riding shotgun with Kole, I wanted to get his thoughts on the latest winger who Vancouver is looking at shifting to the middle.

“It’s been good so far. I think he’s a fast skater and he moves the puck well. I think that’s good as a centerman and he’s comfortable moving it on his forehand to Bartch, (Sven Baertschi) on the left or on his backhand to me on the right. That’s good as a center and it seems like he just wants to work. He’s got a great work ethic and I’m looking forward to playing with him this year.”

I also wanted to get Anas’ thoughts on his new coaching staff. It won’t just be Trent Cull and Gary Agnew who are new faces for Anas as he’s new to the Blues’ organization this season.

“It just seems like everything is about positivity and good energy. They want offence here, but you also have to be able to work to get the puck out. Mistakes happen, as long as you’re working hard, you’re going to be able to earn it back. It just seems like a lot of good energy out there. I think the Mojo is really good and I’m looking forward to really get in and play some meaningful games.”

When it was first announced that the Comets would be shared between the Canucks and Blues this year I wondered how things would work out. It’s early, but it sure sounds like everyone is saying all of the right things and that everyone is on the same page. Time will tell if things work out over the course of the season, but for me, the idea of watching what is looking like it will be a very quick team that also has a solid grit/sandpaper element is pretty appealing.
Kole Lind as a first-line pivot in the AHL between two highly skilled wingers is something that I have a lot of time for. Will Lockwood being moulded into a lightning-quick special teams guy also seems like a solid plan of attack.
The Comets have one more day of practice tomorrow before a scheduled preseason game against the Syracuse Crunch on Saturday. Things are about to kick-off for this incarnation of the Utica Comets. Follow this space all season to stay on top of your Comets content. We have some fun things to come that are currently simmering on the back burner.
Uncategorized
Recent articles from Cory Hergott