Travis Green may deserve to get fired, but he still deserves better than this from the Canucks 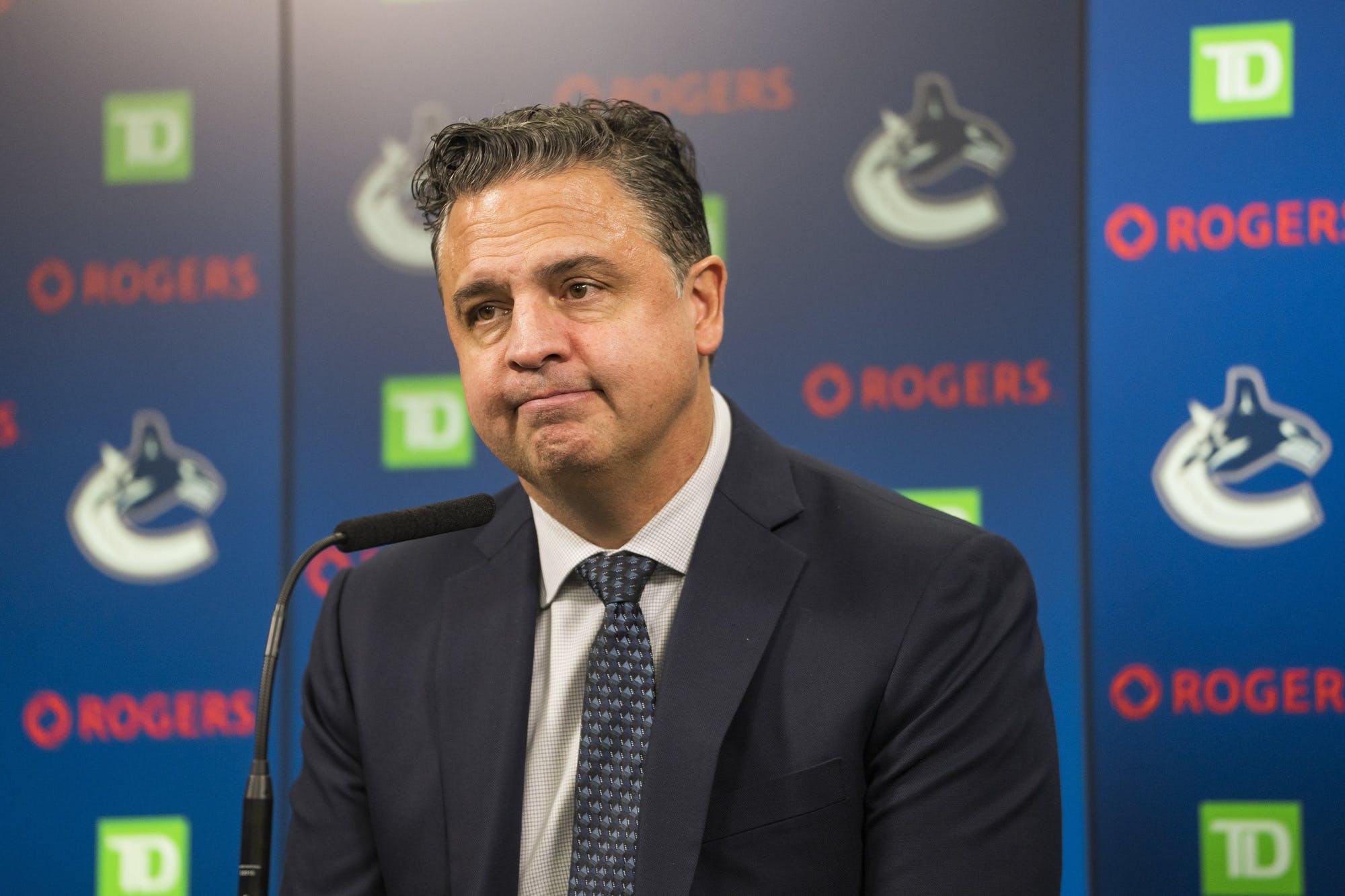 By Stephan Roget
1 year ago
Flashback to April of 2017. Kendrick Lamar’s DAMN. had just dropped. The Fate of the Furious was at the top of the box office. Auston Matthews and the Toronto Maple Leafs were flaming out in the first round of the Stanley Cup Playoffs for the first — but not the last — time.
And Castlegar’s own Travis Green had just been hired as head coach of the Vancouver Canucks.
“This job is also very special to me because it is in Vancouver, B.C.” said Green in his introductory press conference. “When people ask me where I’m from, I’m proud to say British Columbia. I remember growing up in Castlegar, watching Hockey Night in Canada, playing road hockey, cheering for the Canucks — it brings back a lot of great memories. My parents still live in Castlegar. … So, to coach in this province — it matters to me.”
Flash forward to December of 2021, and it doesn’t take a UBC graduate to see that Green’s days of being a head coach in his home province are nearing an end.
There’s not much that can be done about that, either. NHL coaches are hired to be fired, and Green must have known this moment would come eventually — and with the Canucks off to a 7-14-2 start as of this writing, he must know it’s coming soon.
But it’s not the how, so much as the why, that is bothersome here.
We’ve spoken before at CanucksArmy about the organization’s perceived mistreatment of Green amid the truncated 2021 season. He entered and exited that campaign as a lame-duck coach on an expiring contract, leading to year-long speculation about his future.
He would not be extended until two days after the 2021 regular season got done working over the Canucks.
Despite his lame-duck status, it was still Green who was trotted out first when news broke of sexual assault allegations against Jake Virtanen. Not GM Jim Benning, not AGM John Weisbrod, not hands-on owner Francesco Aquilini. There was really no possible way that a head coach could speak to either the allegations or the investigation that was sure to follow, but it was still Green out there facing reporters with difficult and important questions he couldn’t answer.
All the while, he twisted in the wind, contractually. When he wasn’t answering questions about PR nightmares, it was questions about his own job security.
All in all — COVID outbreak, Pettersson injury, veteran exodus included — it was probably one of the more stressful seasons in Green’s coaching career.
But, so what? He got the two-year extension and the organizational vote of confidence in the end. All’s well that ends well, right?
Well, hold on to your butts, because we’ve still got the 2021/22 season to cover.
Once again, the Canucks are off to a dreadful start, and once again Green’s future has become a topic of daily discussion — extension or not.
When asked about the team’s turmoil on special teams at a rare November 18 press conference, Benning was sure to throw Green under the bus, noting that “…We have the personnel, I believe, to have a real good power play and, for whatever reason, we’re not performing on the power play and then our penalty kill, it’s really hurt us this year.”
And as that bus came around for another turn, Benning made it clear that “It’s just not the players, it’s the strategy involved” before admitting that, when it came to the future of the coaching staff, “We’re looking at everything.”
It wasn’t exactly a ringing endorsement, and Green hasn’t been getting much support from higher up in the Vancouver hierarchy, either.
After an awful blowout-strewn 0-3 road trip in mid-November, the organization let whispers flow through the media, social and otherwise, that any firing decisions were dependent on the reaction of the Rogers Arena crowd when the Canucks returned.
Or, in other words, they freely invited their fans to boo and jeer Green — and possibly Benning — out of a job.
Instead of, you know, just firing them on account of the disappointing skid/start/season/couple of years.
Fortunately, that unnecessary cruelty was avoided by three close games in the homestand that followed, one of which the Canucks even managed to win. That was enough for Sportsnet to be able to drown out the chants and the boos on the home broadcast.
But as we wrote a couple of weeks ago:

Fans didn’t need an invitation to chant “Fire Gillis!,” and they’re not going to pass up an open invitation to chant “Fire Green!” and “Fire Benning!” It might not happen in the first period of the homestand, it might not even happen in the first game, but it’ll happen as soon as the Canucks trail by a significant amount, and that’s a near-certainty these days.

But that homestand has only given way to a five-game road trip, of which the Canucks have completed four games to the tune of 1-and-3.
After one more road game in Ottawa, they’re back in Vancouver for six straight.
Somewhere in those six games, it’s almost bound to happen. The Canucks are going to trail, the crowd is going to turn ugly, and then that’ll be that. It won’t take any more than that to convince ownership to make a move. In many ways, the decision has already been made. The vote of confidence has been revoked — now it just needs to be stamped. And, oh, how it will be.
Green’s last memories of coaching in his home province may very well be memories of derision and scorn for his performance echoing off the walls of Rogers Arena.
Maybe that will be the end of Benning, too, but let’s be honest — probably not. In all likelihood, Benning’s departure will come in the offseason, and maybe not even this one. It will be Green and his coaching staff, and they alone, who has to take a walk of shame to the unemployment line as the contempt rains down around them.
And that’s simply not fair.
Especially not when there’s a better way. Not just a better way, in fact, but the way in which NHL teams have traditionally handled situations like this for time immemorial.
If you’ve got a coach that you don’t want anymore, you fire them. You don’t drag the process out until it’s become completely untenable, burying a season in the process — and, quite possibly, sullying that coach’s chances of a future head coaching position.
You fire them as soon as you decide that they’re not the coach you want to move forward with, you put an interim coach in place, and you begin your search for your next permanent fixture.
That’s not what’s happening here at all. The secret is out. The Canucks are actively looking for a new head coach. They’ve already been given permission to speak to Claude Julien, there were rumours of a Mike Babcock dinner date, and the team has at least discussed the possibility of Scott Walker internally.
The hunt is on for the next Green, and the current Green hasn’t even been fired yet.
Green will be the first to tell you that coaching in the NHL is a privilege. It’s a word he used when he was first hired, and he used it again when he was signed to an extension this summer.
But we’re well and truly at the limits of that privilege when we talk about Green’s situation.
He’s being set up for a very loud and very public failure down at ice level, and all the while his bosses are interviewing potential replacements up in the executive suites.
All the while the fans whip themselves up into a well-earned frenzy. The Canucks’ organization must know they could ease a lot of the tension in the fanbase if they’d just announce the coaching change they’ve already decided on making, but for the time being, they’re letting the full weight of that anger fall down on Green instead.
The fans now know that if they want change sooner, they’ll have to make some noise — and not in the fun way.
The fans can’t be blamed when it happens. It’s not a situation that they, or Green, should have even been put in.
But there’s plenty of blame to go around all the same.
Uncategorized
Recent articles from Stephan Roget