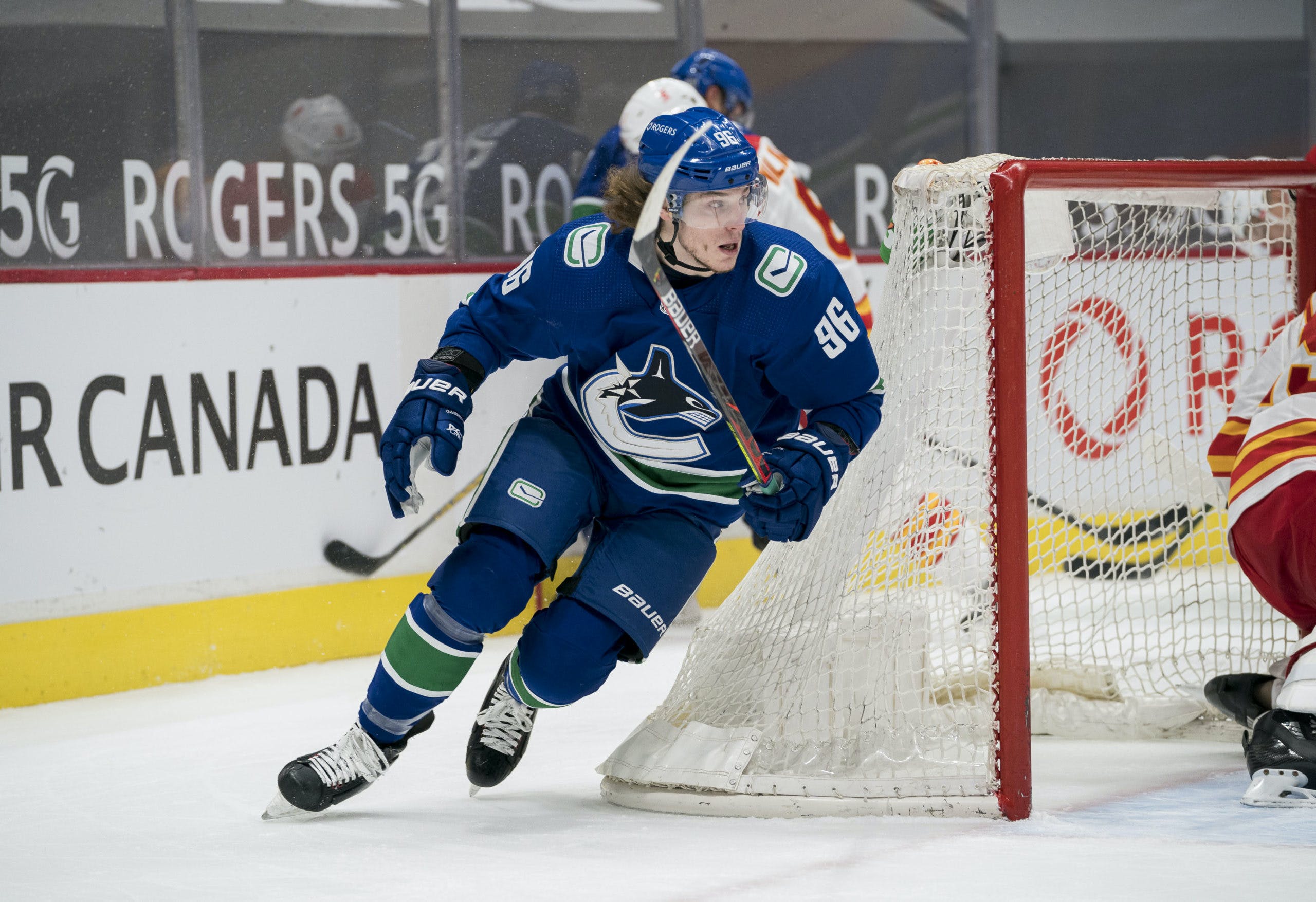 By Faber
1 year ago
It’s time for Adam Gaudette to go for a run with Nils Hoglander and Bo Horvat.
The 24-year-old has been packing a punch in the offensive zone all season long. His effort level is high enough to skate in a top-six role. With the shift to the wing, Gaudette puts himself in more odd-man rushes and creates a ton of scoring chances.
The Canucks have played eight games in the month of February.
They have lost seven of those eight games.
In those eight games, the Canucks have just eight five-on-five goals.
They need to start generating offence at even strength. The team does look to be more defensively responsible, but those horrendous giveaways just seem to snowball and end up costing this team points on what feels like a nightly basis this month. This team needs a lot to go right, and hockey requires a lot of five-on-five goals in order to be a good team.
The Canucks need to take a defibrillator to their even-strength offence. There is no team that is struggling worse than the Canucks at even strength this month, as the Canucks are currently scoring 1.31 five-on-five goals per 60 minutes.
This Canucks defence core is good enough to hold their own against any team in this division when at least three of their defencemen have a good game. The team needs to start generating offence at even strength and one way to do that is by putting Adam Gaudette in the top six.
Gaudette is currently leading the Canucks in some major offensive statistics. He does an incredible job of bringing the puck into the dangerous part of the ice and attempts more shots on net than any other player on this roster. He is also the only player on the Canucks’ roster who had an individual expected goals per 60 over one. 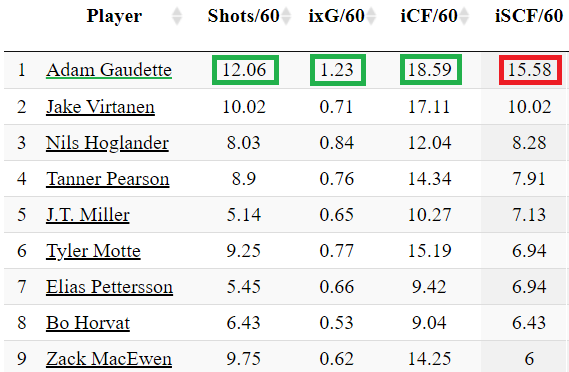 Since moving to the wing, the slot has opened up for Gaudette in the offensive zone. He is taking a ton of dangerous shots, the type of shots that would fit nicely on the wing of the captain and across from the ultra-offensive and ultra-aggressive rookie Hoglander.
Hoglander has played the left-wing over his career. This past season, Rögle BK of the SHL played Hoglander mostly on the right side, but he has had lots of time on the left at the SHL level as well as the national stage with the Swedish World Junior Team.
Horvat and Hoglander both go to the net hard with the puck and Gaudette does a good job of opening up a passing lane to the slot when he plays with players who go to the net hard. Gaudette’s aggressiveness towards the net feels like the kind of shock that this top-six group could use. The shooting chart shows that Gaudette is doing a tremendous job of getting shots off from the slot. 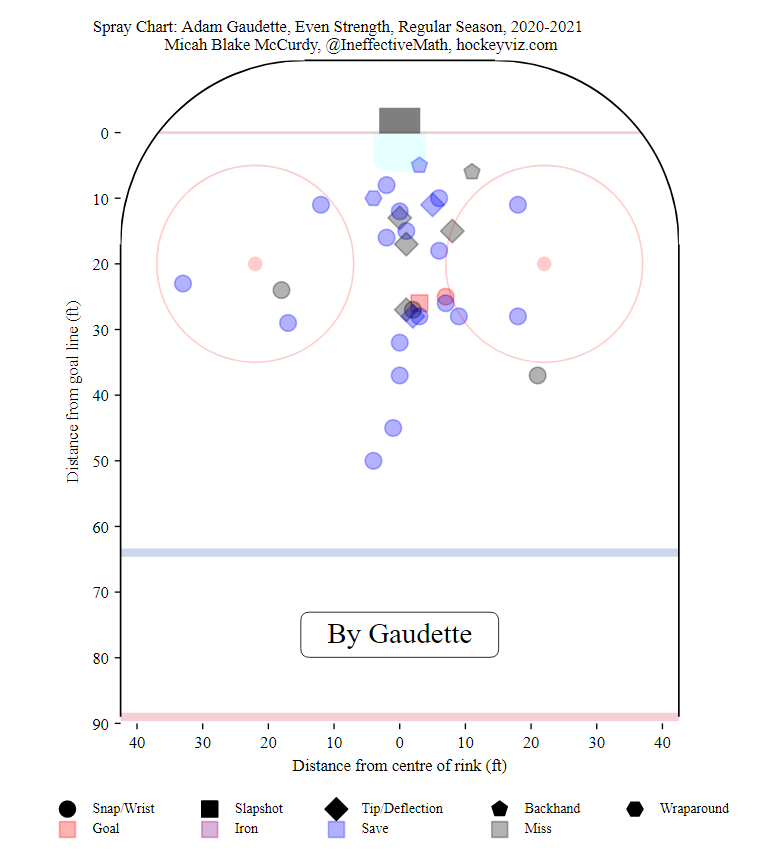 Gaudette isn’t just leading the Canucks in some offensive stats, either.
He is at the top of the league when it comes to players creating scoring chances at five-on-five.
It’s exactly what the Canucks’ top six needs. 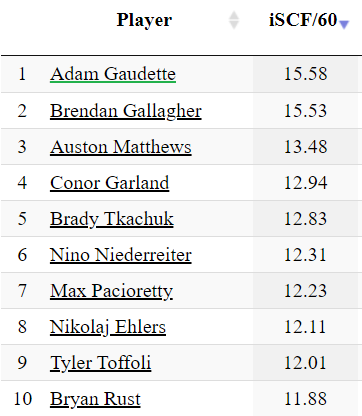 His effort level and creation of offence should be noticed and makes sense to get a run with Horvat and Hoglander to jolt their line into some more offence.
I’ve always thought that Tanner Pearson could fit in with Brandon Sutter. The two players attack the net in a similar way and both can score from their shot and around the net. That line could have some potential if you were to saddle up a big energy guy like Zack MacEwen. Gaudette is a peacock on the third line and Travis Green needs to let that peacock fly his way up to the top six.
Gaudette has proven time and time again over his hockey career that he knows how to find openings in the defence. He proves to have offensive intelligence and that is the type of player that Hoglander should be playing with. His grit and attention to the defensive zone works well with Horvat and the combination of Gaudette’s finishing ability and offensive IQ has all the ingredients to create a solid second line.
They have lost seven of their last eight games.
Something needs to change to energize this team.
What’s stopping Adam Gaudette from being that offensive sparkplug as a winger in the top-six?
Nothing.
Uncategorized
Recent articles from Faber