Tight up against the cap already, how can the Vancouver Canucks possibly improve this offseason? 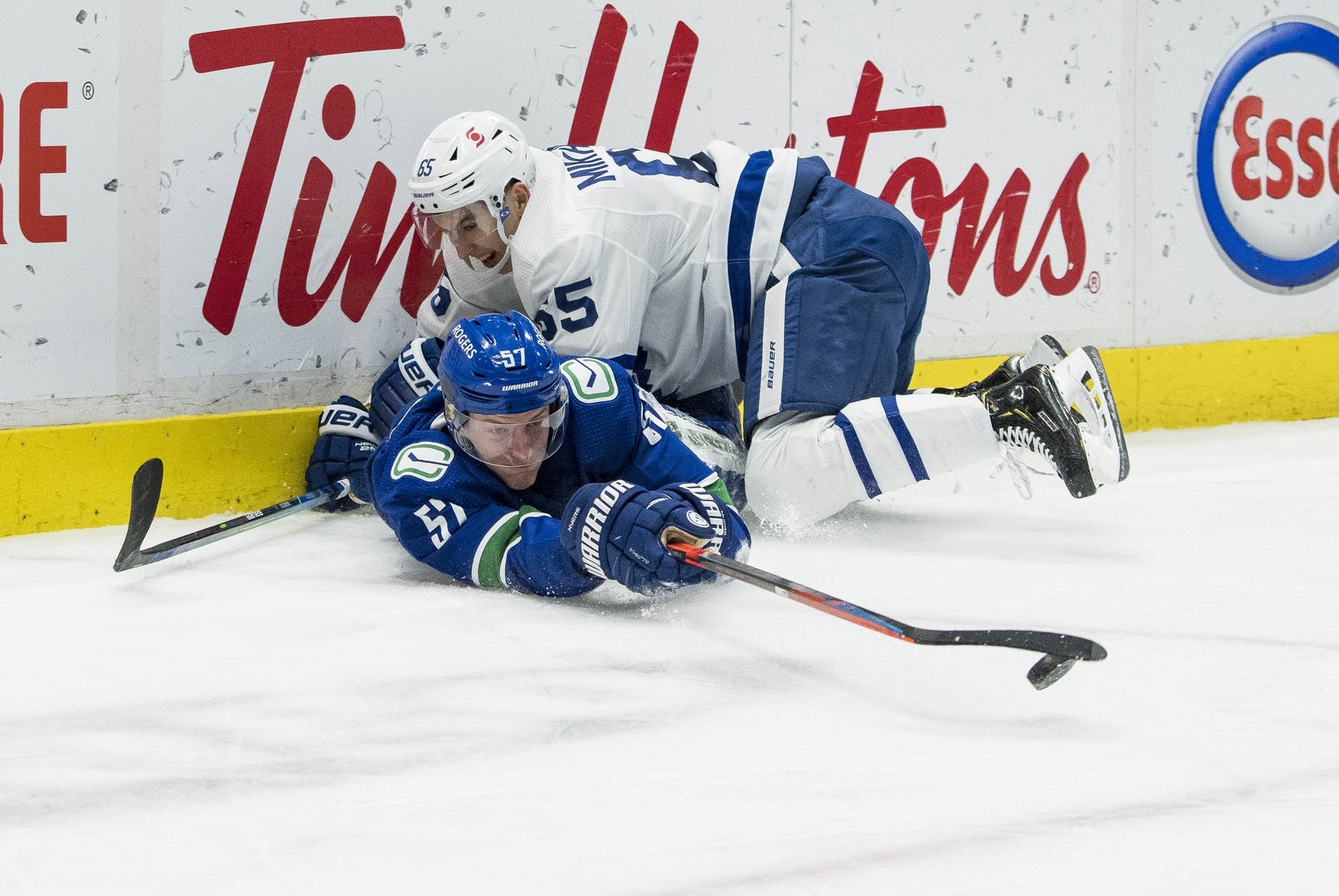 By Stephan Roget
1 year ago
The Vancouver Canucks are back in action, but with 18 games to go in less than a month, the 2021 offseason is also right around the corner. With that in mind, some of us here at CanucksArmy have begun to preview a few of the many changes to come in what promises to be yet another transformative summer for the franchise.
Last week, we looked at who the Canucks might lose via the 2021 Seattle Kraken Expansion Draft. This week, we’re switching it up with a look at potential additions — or, more accurately, a lack thereof.
Additions, and especially those additions that might actually improve upon the roster, cost cap space, you see. And that’s something that the Canucks are already running low on.

On the books already

Contracts that absolutely need to be signed

There are also a handful of contracts that the Canucks simply cannot afford not to sign this offseason.

The team’s top forward and franchise center will be extended. With a COVID-shortened season compounding into an injury-shortened season, chances are very good that Pettersson will sign some sort of bridge deal, but even that will cost the Canucks a pretty penny.
Minimum Cap Hit= $7 million is the absolute lowest we can see it going, and that’s generous.

The same goes for the team’s top defenseman. The 2021 season hasn’t been the step forward for Hughes that many were hoping for, but he’s still among the league leaders in blueline scoring and that’s going to earn him some big bucks. Hughes will also bridge, and if he makes less than Pettersson, it won’t be by much.
Minimum Cap Hit= $7 million might be a more accurate prediction for Hughes, but we still don’t see him going any lower.

Obviously, Juolevi is a much lower priority than the preceding two players, but he’s in line to take up one of the Canucks’ protection slots, and it would be pretty silly not to sign him. He hasn’t been given near enough opportunity this year to demand much of a raise, if any.
Minimum Cap Hit= $900K

One of the team’s prospects, Lind will absolutely be signed and, given that he loses his waiver exemption next year, he’ll almost certainly be on the main roster. Lind has even less grounds than Juolevi to ask for a raise, so expect him to come in at a very reasonable salary, too.
Minimum Cap Hit= $900K
All told, these four contracts should add at least $15.8 million to the Canucks’ cap hit, bringing us up to a total of $80.552 million — already right up against the cap ceiling. Unfortunately, what we’ve described here is far from a complete roster.

Roster spots to fill and cap space left over

For the purposes of a visual aid, we’re going to jot down a quick-and-dirty mock 2021/22 roster for the Canucks below, as it stands right now. (In other words, don’t get on us about the line combinations just yet!)
As you can plainly see, that leaves the Canucks with less than a million in space to sign three to four additional defenders — which is impossible. Even if rookies like Jack Rathbone with low cap hits fill all of those spots, it can’t be done. Ergo, the Canucks will have to clear some cap just to ice a valid roster, never mind an improved one.
Thankfully, they have some options on that front.

The Canucks literally have to cut cap at this point, so it’s not a matter of if, but how. We’ll start with those methods that are pretty much guaranteed to occur and then work our way backwards in likelihood.

The Expansion Draft, minus incentives

Like it or lump it, the Canucks will be losing a player in the 2021 Expansion Draft to the Seattle Kraken. While speculation will continue to abound until the Kraken actually make their selections in July, we don’t see Vancouver’s first-ever regional rival doing them any favours on the financial front — not without some major incentive, that is.
We speculated last week that Zack MacEwen would be chosen by the Kraken, so we’ll stick with that for the purposes of this hypothetical endeavour. You might notice that we’ve already offered Jonah Gadjovich — also minus a waiver exemption in 2021/22, and thus probable to make the team out of camp — up as a replacement in our roster template above.
A Gadjovich-for-MacEwen swap does save the Canucks on the cap, but only to the tune of about $50,000.

The Expansion Draft, with incentives

There’s always the chance that the Canucks incentivize the Kraken to take on a player with an above-average price tag, but it might prove costlier than its worth.
Consider that, under a flat cap, almost every franchise is in cap trouble of some sort. Now Seattle gets to saunter in with a full $81.5 million in spending capacity, and they’re going to have every other team at their beck-and-call.
When it comes to cap space, it’s a sellers’ market, and Seattle is the only seller. So if the Canucks or any other team wants to pawn off their high-priced riffraff, they’ll have to pony up to do so.
Given some of the cap dump deals struck this season with non-expansion teams, one has to think that the bidding starts at a second-round pick and goes up from there. Maybe it costs less to get someone like Jake Virtanen…maybe.
But a year of Antoine Roussel at $3 million? That’s at least a second, and probably more.
A year of Loui Eriksson at $6 million? Now we’re talking a first.
Three more years of Tyler Myers at $6 million? We shudder to think what it might cost, and then you’d have to find another top-four defender somehow.
The harsh reality is that Seattle is going to have better players available to them for cheaper. They have no reason to help anyone out, least of all Vancouver.
This a route the Canucks can go down, but only as a last resort.

It is all but assured that Ferland will remain on LTIR for the foreseeable future. That effectively earns the Canucks a much-needed $3.5 million in space against the cap — enough to get roster-compliant, at the very least.
There continue to be whispers that Beagle’s current mystery ailment might be one that keeps him out of the lineup for good, which would allow for up to $3 million more of space. But Beagle would have to be replaced on the roster, automatically eating into that $3 million. And until that’s absolutely set in stone, we can’t count on it, and the Canucks can’t, in good conscience, spend it.
Same goes for those rumours/pipe-dreams of Eriksson walking away from his remaining $3 million in unpaid salary and agreeing to a contract termination. We’ll believe it when we see it.

The Canucks can, and probably will, pick up a little extra space via one or more buyouts. Below, we’ll break down what they can get for each bought-out contract.
Loui Eriksson
Eriksson’s agent mentioned that a buyout was a possibility this offseason, but the numbers aren’t all that appealing. Any little bit of space helps, and right now Eriksson is just taking up space, but there might be smarter ways to use the buyout option.
Braden Holtby
Holtby’s contract, on the other hand, qualifies as medium-buyout-friendly. The Canucks can gain a boatload of space from a Holtby buyout next year, when they could really use it, but they’ll pay for it the year after.
Holtby could theoretically be replaced on the roster by the low-cost Michael DiPietro, maximizing the amount of these dollars that could be spent elsewhere on the roster. However, that’s quite the gamble to make on a goaltender who hasn’t played a game in a calendar year.
Jake Virtanen
Virtanen’s contract reads like it was made to be bought out. That’s not a typo, a Virtanen buyout really would cost a scant $50,000 on the cap next year, and only a half-million the year after. Virtanen is a roster player who would have to be replaced, but one of the quickest and easiest methods by which to gain cap space this offseason has to be buying him out, and it will be considered.
Antoine Roussel
A Roussel buyout is like an Eriksson buyout cut in half, with the additional caveat that Roussel still plays somewhat of a role on the roster. To replace Roussel costs almost as much as is gained by buying him out, so this one is a no-go.
Jay Beagle
Beagle’s contract is what we might call “buyout-proof.” You gain less cap space this next season than it would cost to staff a fill-in, and then you get dinged an unnecessary $400K the year after. Buying out Beagle would actually hurt the team’s cap situation.

Can the team improve?

The Canucks can definitely staff a cap-compliant roster next season — assuming nothing goes catastrophically wrong in contract negotiations.
Ferland’s $3.5 million in LTIR and at least demoting someone like Roussel or Beagle wedges open enough space to sign or promote those three or four necessary defensemen. Nothing too fancy, but something like Rathbone, maybe Nikita Tryamkin, maybe Travis Hamonic and/or Alex Edler on extremely team-friendly deals.
But that’s just compliancy. That’s just putting together a roster that is about as good as the one currently in the bottom-ten of the league, and that could even be worse if some youngsters don’t pan out.
Actually improving the Canucks is going to take a combination of good fortune, natural progression, and ruthless decision-making.
And even then, improvements may be minimal.
Vancouver will be counting on players like Pettersson, Boeser, and Hughes to take another step forward in their development.
Some well-timed LTIR placements or unexpected generosity from Seattle helps buy maybe $3 million at most.
Buying out Virtanen and Holtby, to be replaced by Vasily Podkolzin and DiPietro, would be a controversial decision, but an efficient one. Doing so opens up more than $4 million in cap space with the potential for an uptick in performance.
So maybe the Canucks cobble together about $7 million in extra space. They could perhaps then use that to address desperate roster needs, like a proper third line center or another impact top-four defender.
But they’d still have to find those players and get them to Vancouver, which might be easier said than done. And, again, we’re talking about a lot of ifs here.
Any number of things could sink all hopes of improving. Pettersson and Hughes could buckle down in their twin contract negotiations. Ferland could remain the only Canuck on LTIR. Seattle may shut the door on cap dumps. Francesco Aquilini could prove reluctant to buyout deals in a post-pandemic economy.
Suffice it to say, then, that there’s a very real chance that the Canucks enter the 2021/22 season as a team not much better than the one currently skating around in 2021.
Maybe it’s best to pin all hopes on the 2022 offseason, when most — but not all — of the team’s onerous contracts come off the books no matter what.
And maybe Jim Benning knew what he was talking about when he said the Canucks were still two years away from being competitive.
Uncategorized
Recent articles from Stephan Roget