The Statsies: In which the Canucks waste an entire goal saved by Collin Delia 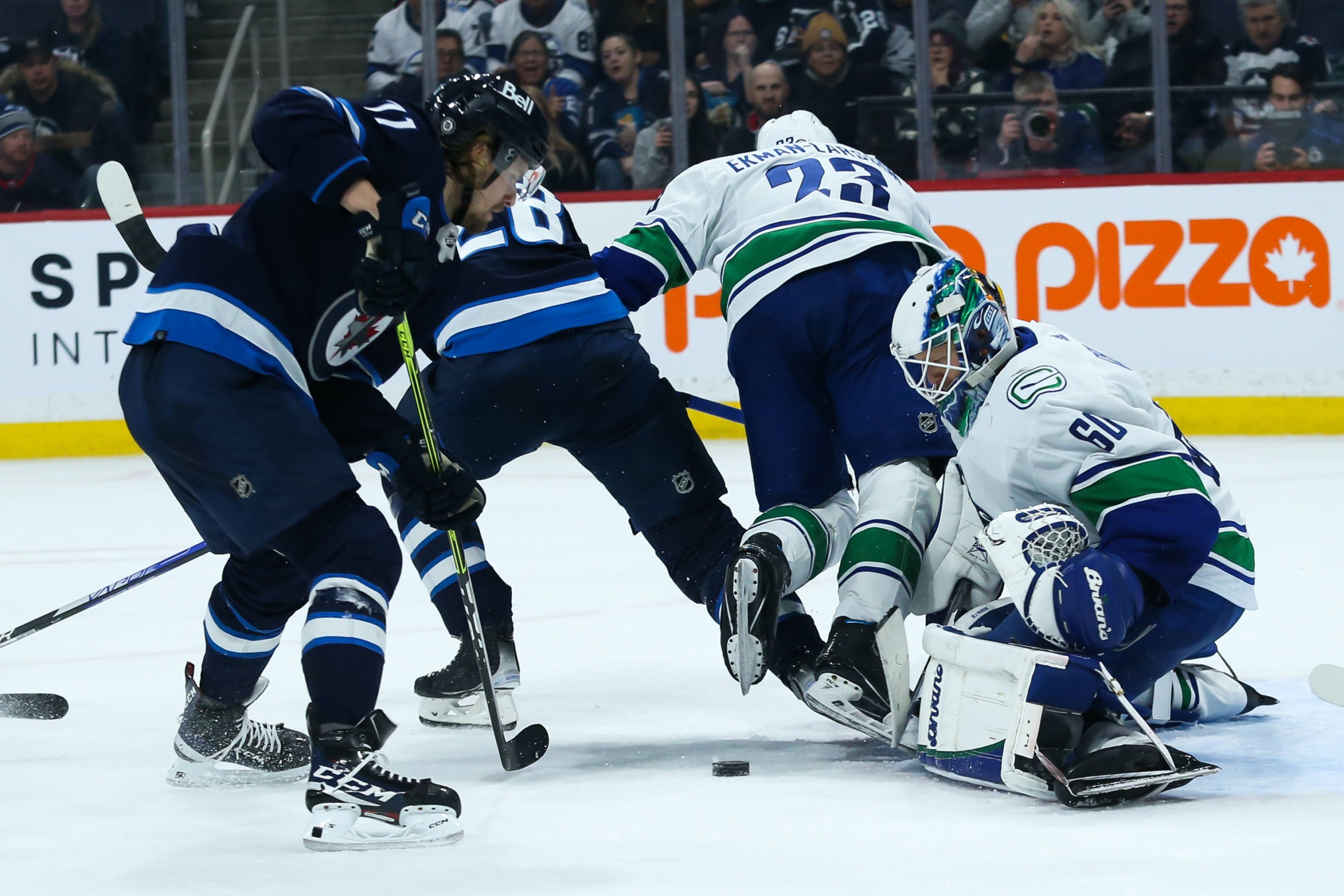 By Michael Liu
1 month ago
Be sure to check out NHL betting odds site Betway for the latest Canucks game day odds!
Just like that, the momentum train comes crashing to a halt. It even had a bell clanging to signal it crashing into the station.
The Vancouver Canucks saw their winning streak snapped against the Winnipeg Jets, falling 4-2 at the Canada Life Centre. There were a lot of regressions that happened this game, falling back into bad habits with inconsistency once again plaguing the Canucks. Sure, it wasn’t all bad, but this effort was by no means enough to win a hockey game.
Here’s the loss, by the numbers.
As always, you can find our glossary guide of advanced stats here.

Perhaps still stuck celebrating Sam Gagner’s 1000th NHL game, the Jets didn’t take off out of the gates. This was something Vancouver took full advantage of as they scored mere moments into the first period. It looked to be a continuation of previous games, where a good first period would help spur them on to victory. By the end of the opening frame, Vancouver held a 15-6 advantage in scoring chances, controlling the puck well with a 55.56 CF% share. It all looked great until it didn’t.
Somehow, that first intermission killed all the good vibes that this team had. Winnipeg turned the game up a notch, adjusting their forecheck and playing much more physically. It was something that the Canucks simply couldn’t respond to and paid the price for on the scoreboard. Statistically, that second period was a massacre, with the Jets dominating Vancouver to the tune of 72 CF%, 21-7 scoring chances, 15-3 high-danger chances, and 2.57 xGF against a paltry 0.68. Pure and simple, the only reason why Winnipeg wasn’t up more was thanks to Collin Delia. The third was slightly better, but even with that low bar to clear, Vancouver gave up 2.16 xGA while only managing 1.04 xGF. Numbers like that usually mean that you aren’t getting enough chances, and for a team down two goals, that’s not good.

The disparity in high-danger opportunities becomes even more glaringly obvious when looking at the heat map. Winnipeg recorded 40 total scoring chances last night, with 25 recorded as high-danger. Much of that concentration was in the ideal area, in the low-slot/net front areas that give high probabilities for goals. Obviously the Jets are a better team than the Sharks, so it’s reasonable to expect that the Canucks wouldn’t be able to manage another sparkling performance last night. However, this was anything but adequate defensively, which is discouraging to see after watching the forwards buy into the team defensive structure.
Vancouver didn’t manage much offensively themselves. With 30 scoring opportunities, merely 13 of them were in high-danger areas, and the large majority of those high-danger attempts coming on the power play. This was the same trend observed during their small winning streak, but the biggest difference is that the lack of finish and efficiency cost them dearly. Coupling that with the porous 5v5 defence that they showed, and it’s no wonder Vancouver walks away from this one with the loss.

Corsi Champ: The only Vancouver Canuck to be clear of 51 CF% last night was Quinn Hughes. The defencemen led all his teammates with a 64.44 CF% share on ice, which gave him an absurd 42.53 CF% rel gap to the team average. Normally, defencemen don’t post the best possession numbers thanks to their entire role being defending, but Hughes has long shown that his offensive abilities shine best with the puck on his stick. Against the Jets, Hughes barely missed breaking even with a 1.60 xGF – 1.67 xGA, but also recorded 16 scoring chances for, the most of any Canuck.
Corsi Chump: Last game produced the first tie in Statsies history for the Corsi chump, as Dakota Joshua and Luke Schenn tied for last with a 14.29 CF%. Joshua was part of two out of the three worst line combinations that the Canucks iced against the Jets, not managing to record a single shot for while yielding a 1.18 xGA during his 6:28 TOI, a team low.
Meanwhile, Schenn was paired together with the recently returned Travis Dermott, and the results just weren’t great. His -33.91 CF% rel was the worst amongst all Vancouver players, while additionally facing 16 SCA, 9 of them high-danger. Technically speaking, the third pairing is where Schenn belongs (sorry Wyatt), but when you’re getting destroyed by the likes of Morgan Barron (7.14 CF% against) and Kevin Stenlund (8.33 CF% against), it’s a worrying sign. But hey, congrats to Schenn for becoming the first defenceman to reach 3000 hits.

xGF: Conor Garland wins this game’s award by being the only Canuck to hold a positive xGF% share against Winnipeg. His 56.30 xGF% put him at a 27.69 xGF% rel to his teammates, which is honestly really sad to see. What this means is that besides Garland, the rest of Vancouver’s roster had a higher probability of being scored against than scoring a goal for, at about a 28% decrease in likelihood. Much of the reason why Garland’s numbers were good is that he broke even in high-danger chances for/against, a 50.00 HDCF% lending itself favourably to his defensive numbers. Not bad, considering his performance relative to the rest of the team.
GSAx: Collin Delia did his best for this team, and then some. The netminder was simply fantastic between the pipes and why the game wasn’t a blowout by the end of the second. In total, Winnipeg registered 4.36 xGF with Delia in net, thus meaning that his GSAx on the night was a 1.36. Delia essentially bought the Canucks an entire goal when he was playing, which is quite a significant amount. All his goals against were recorded as high-danger, chances that have a high likelihood of converting to goals thus not impacting his numbers as heavily. In all, there wasn’t much to pick apart with Delia’s performance last night.

Bring out the blender: Once again, Bruce Boudreau brought out the line blender when things weren’t going the Canucks’ way. It’s not a bad tactic to try and get a spark going, but unfortunately for him, nearly nothing he tried worked. Out of the 9 lines that saw ice time at 5v5 play, only one line was over 50.00 CF% (Kuzmenko-Pettersson-Garland), and that line was only together for 1:37. Funnily enough, the best line with over 5 minutes of ice time was the Lazar-Miller-Garland unit that got torched against the Sharks, posting 50.00 CF%, 54.30 xGF%, and 60.00 HDCF%. The worst combinations were Mikheyev-Lazar-Garland (zeros across the board), Åman-Joshua-Lazar (also zeroes), and Studnicka-Åman-Joshua (15.38 CF% in 4:46 TOI)
This game also marked the first time that the Kuzmenko-Pettersson-Pederson line looked mortal. Sure, they were the Canucks’ third-best line, but a 35.71 CF% and 17.06 xGF% stand out as anomalies against their body of work, and glaringly so at that. In comparison to last night, Kuzmenko-Pettersson-Pederson were averaging 63.64 CF%, 68.19 xGF%, and 63.64 HDCF%. Perhaps Winnipeg specifically scouted against them — Neal Pionk and Dylan Samberg saw a large chunk of ice time against the trio where they dominated them in puck possession.
Not an ideal return: Speaking of Travis Dermott, his return from LITR showed that there was still plenty of rust to shake off. Dermott was the worst Canuck at 5v5 play, recording 11.11 CF% while facing 10 scoring chances against, and just a singular chance for credited to him on ice. Dermott struggled against all comers, with the third line of Barron-Stenlund-Jonsson-Fjallby being their worst nightmare, followed by the first line of Connor-Dubois-Gagner. Facing off against those 6 the most, Dermott didn’t manage to record a CF% over 11.11, while posting 0.00 CF against the first line. It’s tough to ask him to step into that role right after coming back from injury, so some leeway can and should be given.
The double-edged sword of Huggy-Bear: Noah Strang recently posted a piece about the Hughes-Bear pairing turning in good results early, and this game gave further support to that. The pairing was by far the best Canuck unit at 5v5, recording 56.00 CF%, 55.69 xGF%, and 61.54 SCF% together. Their quality of competition wasn’t bad either — Hughes-Bear spent most of their ice time against the top-6 of Winnipeg, turning in results while doing so. They were simultaneously the best defensive, and offensive pairing that the Canucks had.
But, as a consequence, this thrust Oliver Ekman-Larsson and Tyler Myers into the main “shutdown” pairing role. I use quotations, because the pair bled chances to the tune of 13 SCA, 8 of which were high-danger. They recorded a 1.36 xGA during their 14:16 TOI together at 5v5 play, spending most of that against the second line of the Jets (Lowry-Scheifele-Kuhlman). It wasn’t an ideal situation, but the pair prevented any goals from being conceded. Still, with the probability of the opponents scoring skyrocketing with OEL-Myers on ice, it bears considering if the positive impact of Hughes-Bear can outweigh the negatives of OEL-Myers.

CF% – 38.14% HDCF% – 34.21% xGF% – 34.63%
The Canucks probably should’ve lost by more. They showed up for one period, where they started off so well, and yet just couldn’t match the pace when Winnipeg decided to take it up a notch. Not everything was doom and gloom, but the inconsistency of this team continues to frustrate many, as one step forward is soon matched with another step back.
Vancouver heads into Calgary tomorrow to take on the Flames, in a matchup that both teams desperately need a result from.
Stats provided by naturalstattrick.com
Editorials
Recent articles from Michael Liu