The Statsies: Where a tepid Canucks effort comes in too little, too late By Michael Liu
29 days ago
Be sure to check out NHL betting odds site Betway for the latest Canucks game day odds!
There wasn’t a better way to wrap up the Canucks’ 2022 than this game.
The Vancouver Canucks headed into Calgary for New Year’s Eve and came up short in a 3-2 loss against the Flames. In a vacuum, a one-goal defeat isn’t the worst. This team’s been on the end of far worse. But in the context of the season thus far, and the manner in which they lost this game — it feels as if this sums up Vancouver’s lack of cohesion and effort throughout the lineup. Unfortunately, even as the calendar year flips, it feels as if the team’s problems will continue to plague them into 2023.
Here’s last night’s loss, by the numbers.
As always, you can find our glossary guide of advanced stats here.

Something that stands out immediately in the game flow chart is that the Canucks conceded all three goals in their best period. The second period saw Vancouver hold a narrow 7-6 edge in scoring chances, along with a 5-2 advantage in high-danger opportunities. This doesn’t sound bad until you realize that the Canucks had three power plays in the period, in which they conceded a shorthanded goal. Not only did the man advantage not get the chances that they should’ve, but also proved costly defensively when momentum wasn’t generated. For all the good that they did, the xGF boiled down to a 0.74-0.72 lead, a minuscule margin that can be chalked up to luck.
Calgary dominated the first and third. A strong start managed to get the Flames on the right foot early, while the final frame was a masterclass of playing with the lead. Calgary finished the third period with a 1.79 xGF, while limiting the Canucks to a 0.59 xGA. The disparity in chances late in the game is a common theme from 2022 for Vancouver, and that inability to find another gear has proven to be a key issue this team faces. Sure, they managed to cut it to a one-goal deficit in the third. But the stats show that its impact was limited, the game’s momentum still flowing away from them. 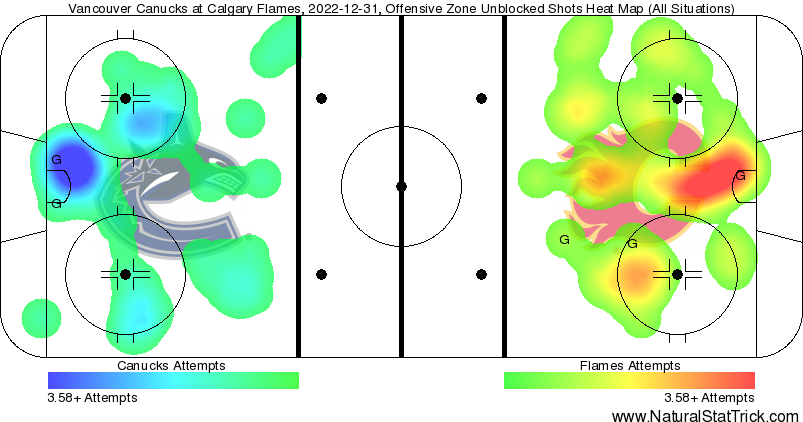 It is simply astounding to see this team consistently and constantly do the same things and expect success. There have been examples of what worked in games that they’ve won, and yet, it hasn’t carried forward well at all. The first game of 2022’s heat map still looks like the last game’s heat map. Vancouver had the front of their crease and slot turned into a firing range for the Flames, who had their fair share of opportunities in high-danger areas. While only one goal came from that range, the space that those chances create shouldn’t be underestimated, allowing Calgary to get time and space in other areas to work with.
On the flip side, the Canucks had a much smaller hot spot in tight against Jacob Markstrom. They managed to strike twice within that zone, but the size is small for what should’ve been a hard pushback when attempting to come back. If there is one consolation, both teams had approximately the same chances at 5v5, meaning that Vancouver’s play at even strength didn’t necessarily cost them the game. It did, however, not win them the game either.

Corsi Champ: There’s the Conor Garland we saw in 2021/22. With a 61.11 CF% last night, Garland claims the final Corsi champ award of 2022 with a good performance against the Flames. What stands out as interesting is that though the winger held a 9-7 advantage in scoring chances when he was on ice, Garland actually yielded a 1.33 xGA, in comparison to the 0.77 xGF he generated. The defensive concerns should be taken along with his puck possession against Calgary last night.
Corsi Chump: Woof. Travis Dermott gets shellacked in his second game back again, bringing up the rear with an 18.75 CF%. His -33.15 CF% rel was just under 10 percentage points worse than the next Canuck, showing a drastic negative impact he has on puck possession while on ice. The Flames did as they liked with the additional puck retention, tallying 8 scoring chances, 4 of them high danger while Dermott was on the ice. In comparison, the defenceman only registered one chance against, with zero shots for. It’s rapidly becoming clear that this Dermott-Schenn pairing isn’t working.

xGF: This game’s xGF winner is Jack Studnicka for the pure reason that he played good defence. The centreman generated only 0.43 xGF but limited the Flames to 0.17 xGA when he was on ice, good enough to give him a 71.23 xGF% to lead all Canucks. Yes, it was a relatively limited sample size, as Studnicka only saw 9:31 of ice time last night. However, the fact that he and the fourth line held their own against Calgary and even at times out-chanced them is a good sign. What isn’t a good sign is how the best defensive player was a fourth-liner.
GSAx: Spencer Martin did his best to stem the tides while the Canucks fanned the Flames in front of him. The third period performance helped keep Vancouver within striking distance, without much run support in front of him. However, that all being said, Martin’s GSAx suffers thanks to a middle-danger goal given up. With the Flames totalling a 2.65 when he was on the ice, Martin’s GSAx works out to a -0.35, about right for the entirety of the game. However, his performance between the pipes shouldn’t be forgotten, especially the flurry of saves he made in the final frame.

Lockwood’s second game of the season: With Nils Åman spending some time with the Abbotsford Canucks, Will Lockwood gets a chance to run with the big club. In his second game of the year, he looked pretty solid as a fill-in option. Lockwood posted a dead-even 0.00 CF% rel, meaning that he was bang average in the Canucks’ lineup. This is coupled with his 55.57 xGF% at 5v5 play, which ranks him as the 5th best Canuck in that category. With speed and physicality, Lockwood seems to be a good bottom 6 option that Vancouver can keep up in the NHL, while the younger players get some time to develop in the AHL.
Where the top 4… play like a top 4?: It’s not exactly a secret the Canucks’ defence hasn’t been the best. Yes, they do get undeserved flack at times due to forwards not tracking back properly in the play. However, against the Flames, the top 4 defencemen that Vancouver iced provided a blueprint on what they could do to be successful. With Quinn Hughes and Ethan Bear lining up as the top pairing, their offensive abilities managed to generate a number of chances. The pairing was on the ice for both goals for, racking up a 0.76 xGF together and limiting Calgary to only 3 HDCA at even strength.
It’s no secret that Hughes-Bear has been good, but OEL-Myers was an understated part that was surprisingly solid. They did give up one goal when they were together, but in general, the second pair held the Flames’ top line to worse possession numbers than against the rest of the team. As well, OEL-Myers gave up 4 HDCA, which isn’t the worst considering the opposition they were up against. Vancouver might not have won the game last night, but the play of their top 4 wasn’t a reason why they lost.

CF% – 46.32% HDCF% – 43.48% xGF% – 34.29%
The Canucks got out-chanced, out-possessed, and outscored against the Flames. There were parts that weren’t the worst, and yet so many other places where they definitely weren’t the best. Maybe the new year comes with a reset of mindset, and this team can finally get some traction and consistency going forth. I wouldn’t be holding my breath.
Vancouver has a small break before they play host to the New York Islanders on Tuesday.
Stats provided by naturalstattrick.com
Editorials
Recent articles from Michael Liu