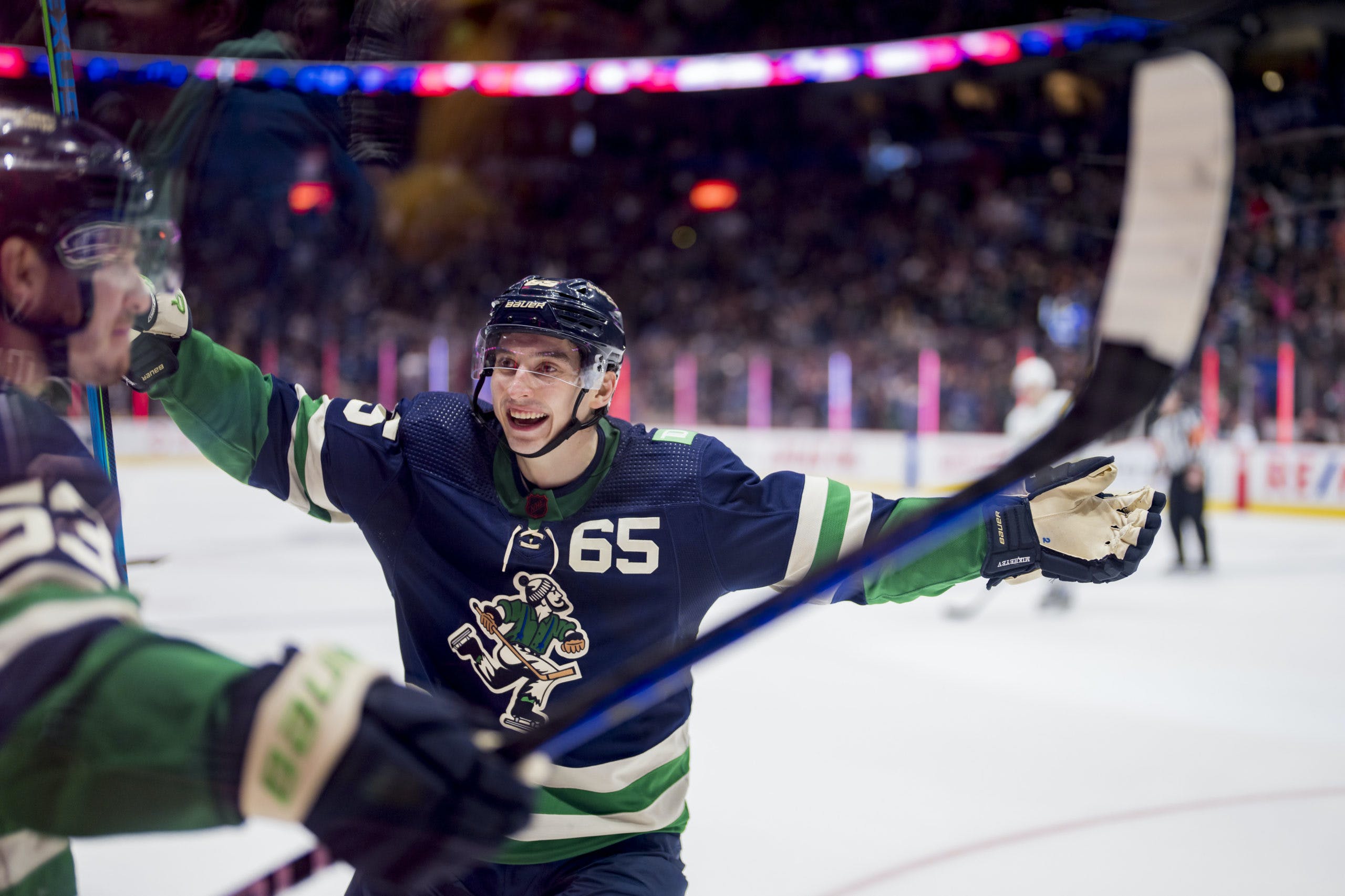 By Michael Liu
1 month ago
Be sure to check out NHL betting odds site Betway for the latest Canucks game day odds!
Looks like the Christmas break didn’t break the momentum, and instead helped get a monkey off a person’s back.
The Vancouver Canucks out-skilled the San Jose Sharks in their first game back from the holidays, taking down the visitors in a 6-2 win. Despite the scoreline, it wasn’t complete dominance by Vancouver at home. However, it was definitely an excellent game, with some encouraging trends that the Canucks are establishing. Finally, some consistency in being a decent team, and perhaps, signs of that turnaround coming that Quads always speaks of.
Here’s the win, by the numbers.
As always, you can find our glossary guide of advanced stats here.

The Canucks started this game well. The first period was probably some of the best hockey that they played all season. At 5v5 play, this team was dummying the Sharks with a 7-2 advantage in high-danger chances, making efficient use of their slight puck possession advantage. That efficiency proved to be a key theme throughout this matchup, where the Canucks made their chances count and San Jose didn’t.
After the first period, the Sharks really took it up a notch. Though the flow doesn’t show it very well, San Jose controlled the CF% share and scoring chances balance during the second and third periods. The only issue is that because Vancouver built up such a lead in the first period, it was hard to really pull anything into their side of the chart. However, despite their chance generation and advantage in puck possession, the Sharks didn’t do anything. On the flip side, even with a lack of grade-A chances relative to their opponent, the Canucks finished clinically when given the opportunity, something this team definitely hasn’t done enough of. 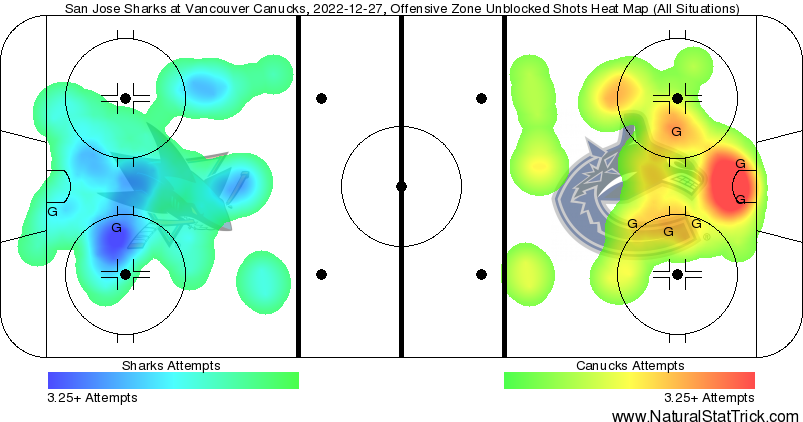 Here is where that efficiency really shines through for the Canucks. Across all situations, the teams finished level in high-danger chances for (11 apiece), but when looking at the heat map, it’s clear to see that the Canucks were getting a higher concentration in tight. This demonstrates a remarkable ability to work the puck to the front of the net, taking and getting their opportunities in great spots. Most, if not all of these high-danger shot attempts came at 5v5 play, further supporting a sustainable source of goals that is much more replicable than man-advantage situations.
Defensively, the Canucks were incredibly solid as well. Giving up one singular hot patch on the inside of the right faceoff circle — and not a very concentrated or big one either — is a mark of a good night in their own end. This is a result of team defence stepping up when needed, with the forwards tracking back into their own end and not losing their coverage. By doing so, it allows the defencemen to focus on limiting pucks coming into the middle of the ice, which they did so effectively as demonstrated by this heat map.

Corsi Champ: Ilya Mikheyev just had his best game in a Canucks uniform. For a player who’s been known in the past for his lack of finish, the Russian winger put up four points and collected this game’s Corsi champ title with a 63.33 CF%. Mikheyev followed through with the theme of efficiency tonight as well, making the most of his 15 scoring chances and four high-danger opportunities. Sticking with the Brock Boeser- Bo Horvat combination, it seems as if he’s found a second home away from Elias Pettersson on this team to be an effective contributor.
Corsi Chump: There was one line that got obliterated tonight, and there will be a discussion about it later. As a clue though, this game’s chump is Curtis Lazar, who got caved in possession-wise against the Sharks. His 17.39 CF% was the only one on Vancouver’s roster to finish below 20%, putting him at a -36.10 CF% rel to his teammates. Lazar’s lack of possession didn’t lead to a goal against while he was on the ice, but everything else wasn’t pretty as he gave up 12 scoring chances against, putting up a 0.23 xGF while giving up a 0.87 xGA.

xGF: It shouldn’t come as a surprise that Pettersson was this game’s xGF leader. Hang on… I misread, it’s Lane Pederson. Yes, the guy from Carolina was leading the charge in the xGF front last night, finishing the game with 76.34 xGF%. It was an excellent showing on both ends, with Pederson’s xGA being the 4th least (0.4) and his xGF (1.28) being the fourth best. He had 12 scoring chances for with half of them being recorded as high-danger, while only seeing one high-danger chance against out of three scoring opportunities. Of course, this comes as a function of playing alongside noted xGF enthusiasts Andrei Kuzmenko and Pettersson, but give Pederson credit — he hasn’t looked too out of place yet.
GSAx: Finally, Spencer Martin gets support from his team defensively. Playing behind a group that is actually organized in their own zone makes a night and day difference for most netminders, and this was the case against the Sharks. Limiting their high-danger opportunities, Martin faced an xGF of 2.50 to come out with a GSAx of 0.50, his first net-positive game in a while. He did give up one middle-danger shot that became a goal, but other than that, it was hard to find a true blemish on his play last night. Martin’s play should quell any speculation about a potential goaltending controversy brewing in Vancouver.

How an analytics darling gets buried: Bear with me here — Conor Garland is not the problem. It’s not to argue that he’s been the solution, but the numbers are not doing him any favours playing alongside JT Miller. As touched on briefly previously, the Lazar-Miller-Garland line was putrid against the Sharks. Tasked with a hard match against Barabanov-Couture-Meier, this unit got shelled on all fronts. They ended the game with team-lows in CF% (14.29), xGF (0.18), xGA (0.53), xGF% (25.26), HDCF% (33.33), SCF (2), and SCA (9). Of course, Lazar bore the brunt of the statistical impact, but Garland couldn’t escape the black hole that is JT Miller as a centre.
What’s interesting is that they’re not a bad combination on the same line — in fact, they’ve proven that they can play together well in previous games. The biggest difference? That was with Bo Horvat as the pivot, with Miller swung onto the wing. Miller is not good enough in his own end with and without the puck, which costs the Canucks in transition and thus impacts the analytics they generate when he’s on ice. On the wing, the defensive responsibility lessens, reducing the negative impact that he has on ice. This would affect Garland, who generally generates decent metrics, but unfortunately gets bogged down when alongside Miller as a centre.
Efficiency from OEL-Myers: At first glance, the usual suspects don’t have the best numbers. Oliver Ekman-Larsson and Tyler Myers were the worst Vancouver defencemen in CF% (25.00, 26.47), with Myers posting the worst xGA (1.09) amongst all Canucks and OEL not far behind in fourth (0.91). That looks par for the course, until looking at the competition and chances yielded. Though OEL-Myers gave up 10 scoring chances against, merely two were high-danger. They didn’t yield a single goal while on the ice, and at the end of the day, that’s the goal of any defenceman. This is coupled with the fact that they too were matched against the Barabanov-Couture-Meier line, which also meant that they saw the majority of action with Lazar-Miller-Garland. So, with that context, it makes sense why their numbers are as depressed as they are, and validates a surprisingly impressive effort defensively by a much-maligned duo.
Petey and Pedey, featuring the Kuzmenkshow: It feels like a recurring theme that Pettersson finds himself centring the best line on this Canucks team. This is yet another edition of that, where Kuzmenko-Pettersson-Pederson has looked positively unstoppable. Sure, they didn’t put up the most points, but the offensive pressure the trio generated was undeniable. This line put up a team-leading 1.1 xGF, while also recording the second-least xGA (0.35) with significantly more minutes played than the fourth line. Their chances were good too — five of their 7 scoring opportunities were high-danger, a ridiculous rate of efficiency. It was an unlikely combination to begin with, but with Mihkeyev finding success alongside Boeser and Horvat, along with the results that they’ve been producing, it’s only a matter of time that the points begin to roll in consistently for this line.

CF% – 45.87% HDCF% – 50.00% xGF% – 51.11%
The Vancouver Canucks made the most of their opportunities tonight, playing with a complete effort from their own zone out. Sure, it wasn’t perfect, but that’s a tough standard to hold this group to. This is an excellent performance, and a 6-2 win against the Sharks was very much earned with high-quality play from the players that they needed to step up.
Next up, the Canucks head out to Winnipeg to take on the Jets Thursday, as they look to follow through on their momentum that they built.
Stats provided by naturalstattrick.com
Editorials
Recent articles from Michael Liu