The Statsies: Elias Pettersson continues to lead the way for the Vancouver Canucks 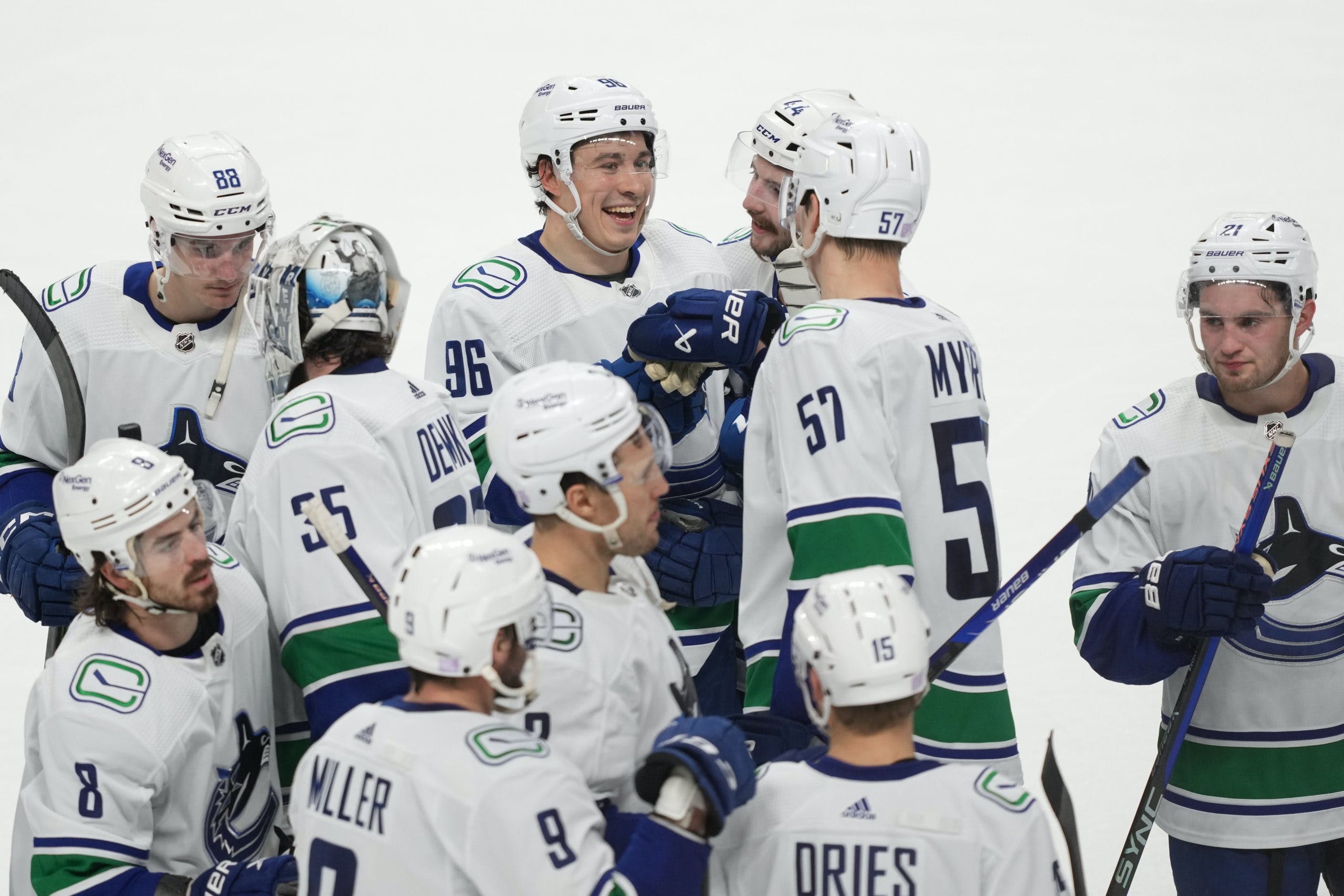 By Michael Liu
2 months ago
Be sure to check out NHL lines site Betway for the latest Canucks game day odds!
Don’t look now, but the Canucks are just one point out of a playoff spot.
Vancouver finishes their three-game road trip with three wins, beating the San Jose Sharks 4-3 in overtime. Something has clicked for this team. In these past three games, the Canucks have played a full 60-minute effort, which has led to plenty of success in their results. It’s a small sample size, but the stat sheet is showing plenty of encouraging trends.
Here’s the win by the numbers.
As always, you can find our glossary guide of advanced stats here.

Yet another game where the Canucks started on time, got themselves out in front, and never let the Sharks gain much control back. For the majority of the game, Vancouver controlled the puck possession balance. The only moment where they got out possessed was about halfway through the third, when the Sharks were seriously pressuring for the tying goal. Even with that, the Canucks managed to limit their high-danger chances, resulting in the xG advantage present throughout the game.
It’s still important to note that San Jose managed to outplay the Canucks during the duration of the third, controlling CF% (59.57) to get the game knotted up at three. That being said, the scoring chances were an even 13-13 between the two teams, with the Sharks only having a slight edge in high-danger chances for (5-4). It speaks to some of the defensive adjustments that Vancouver has made throughout this road trip, something that will be interesting to keep an eye on and see how it evolves.

I feel like a broken record at this point, but what a nice heatmap to look at. Sure, the Sharks had a hot spot in the high slot, but that was literally only one small patch of ice. The rest of the defensive zone is littered with a mix of light yellow and green, showing that while the Canucks yielded shot attempts, they didn’t allow a high concentration of grade-A chances to appear. This is really encouraging to see, as keeping a low percentage of high-danger shots means that the repeatability and likelihood of conceding goals go down as well. It’s a trend that lends well to continued sustained success down the line.
Offensively, Vancouver pretty much had their way with San Jose’s defence. They got all their shots from the slot area, two of the four goals in their deep blue hot spot and three out of four in the danger zone. Once again, this is the third consecutive game where this trend is noticed, which appears to be a recipe for success with this team. It’s the whole repeatability aspect of probability, where the more shots and chances they are able to generate in tight, the more likely and often goals are going to happen.

Corsi Champ: Elias Pettersson finally gets his dues as this game’s Corsi champ after a long run of strong play. His 62.22 CF% led all Canucks last night as his strong two-way game continues to dazzle. Pettersson generated 20 scoring chances in his 19:28 of ice time, which is almost as impressive as the 9 scoring chances he gave up against. Only three of them were considered high-danger, which shows how effectively he’s been able to contribute to the team defence of this Canucks unit. Pettersson looks to finally be healthy as well, which hopefully will lead to bigger and better things as this season wears on.
Corsi Chump: I once again beg that the Brock Boeser-Sheldon Dries-Conor Garland combination gets broken up. Dries is this game’s Corsi chump, coming in at a team-low 36.67 CF%. In his 12 minutes of play, Dries got absolutely destroyed in his own end while contributing nothing offensively. His 0.94 xGA was second-worst on the team, while a team-worst xGF of 0.11 made Dries post the worst xGF% (10.72) on the team. To be entirely honest, I don’t think I’ve seen a player post under 15% in xGF% this season until this point. Dries was on the ice for 4 HDCA, while only creating 1 HDCF.

xGF: Andrei Kuzmenko is this game’s xGF leader, with a 70.66 xGF% to go along with his overtime winner. Kuzmenko has been found money for the Canucks thus far, clicking perfectly alongside a surging Pettersson and Ilya Mikheyev. The Russian recorded the third-best xGF (1.18) on the team, with 6/14 of his scoring chances being high-danger. The efficiency with which he gets these chances is ridiculous, and though Kuzmenko is converting on them at a rate that appears unsustainable, there’s a ton of offensive potential still waiting to be unlocked even when he isn’t scoring.
GSAx: Thatcher Demko seriously can’t buy a break in this category. He managed to get a win last night, but once again posted a negative goals saved above expected on the night. The Sharks generated an xGF of 2.51, which means that with the three goals Demko gave up, his GSAx sits at a -0.49. This doesn’t necessarily mean that he played poorly, but it also means that Demko wasn’t going to steal this game for the Canucks. He was a victim of a couple of unlucky bounces, but one would hope that Demko starts getting back to his game-stealing ways sooner rather than later.

Dr. Jekyll and Hyde: After being the Corsi chump last game, Nils Åman and the fourth line apparently took it personally. Lazar-Åman-Joshua finished the game as the best Canuck line in terms of CF% (64.29) and xGF% (70.84) in 8:21 minutes played. This becomes even more impressive when looking at the players that they played most against, which was Timo Meier’s line. You can’t ask much more of a line than what they put in this game, where they out-chanced the Sharks 3-1 in the high-danger category.
Let’s talk more about Petey: Seriously, Pettersson and his line have been incredible during this stretch. The Swede drew matchup duties with the Sharks’ first line and crushed it again. Tomas Hertl and Timo Meier saw an 8% increase in their CF% when Pettersson wasn’t on the ice, while the entire line kept to around 44.44 CF% while up against number 40. They also got suffocated offensively against Kuzmenko-Pettersson-Mikheyev with a paltry 17.60 xGF% on the night. For context, Hertl’s xGF% spiked up to 68.66 without Pettersson on ice, with Meier’s going up to 65.49.
And then there’s the whole offence part to get to as well. Pettersson’s line has been phenomenal during this road trip, and this game was no exception. They led the Canucks in raw xGF (0.69) with a team-high nine scoring chances generated, 3 of which were high-danger quality. There’s this air that surrounds them whenever they’re on the ice, almost as if they’re expected to get a goal or two. It’s been a treat to watch this trio at work, and the Canucks will hope that this is the new norm.
The effect of puck-moving defencemen: Quinn Hughes led all Canuck defencemen in CF% last night, as he usually does, but guess who was in second place, and actually led all defencemen in CF% at 5v5 play? Outside of one bad turnover, Ethan Bear had himself a very solid game, where his impact was more than noticeable. With Bear on the ice, nearly every single Canuck saw their CF% jump at 5v5 play. His puck retrieval and distribution qualities led to additional possession and retention, allowing Bear’s teammates more time with the puck. It’s pretty interesting to see, especially with how poor Vancouver’s back end was in that regard prior to Bear’s acquisition. Having another mobile defenceman that can move the puck is something that every team needs more of.

CF% – 51.56% HDCF% – 55.56% xGF% – 53.21%
The Vancouver Canucks wrap up a successful three-game road trip with an exciting overtime win, exuding much of the same qualities that helped them win their first two on the road. Vancouver has some hope and optimism now, with the club gaining traction in their play on the ice. Whether this continues still remains to be seen.
They now return home, getting ready to face the Washington Capitals on Tuesday at Rogers Arena.
Stats provided by naturalstattrick.com
Editorials
Recent articles from Michael Liu