The Statsies: A classic, low event Canucks loss against the Avalanche 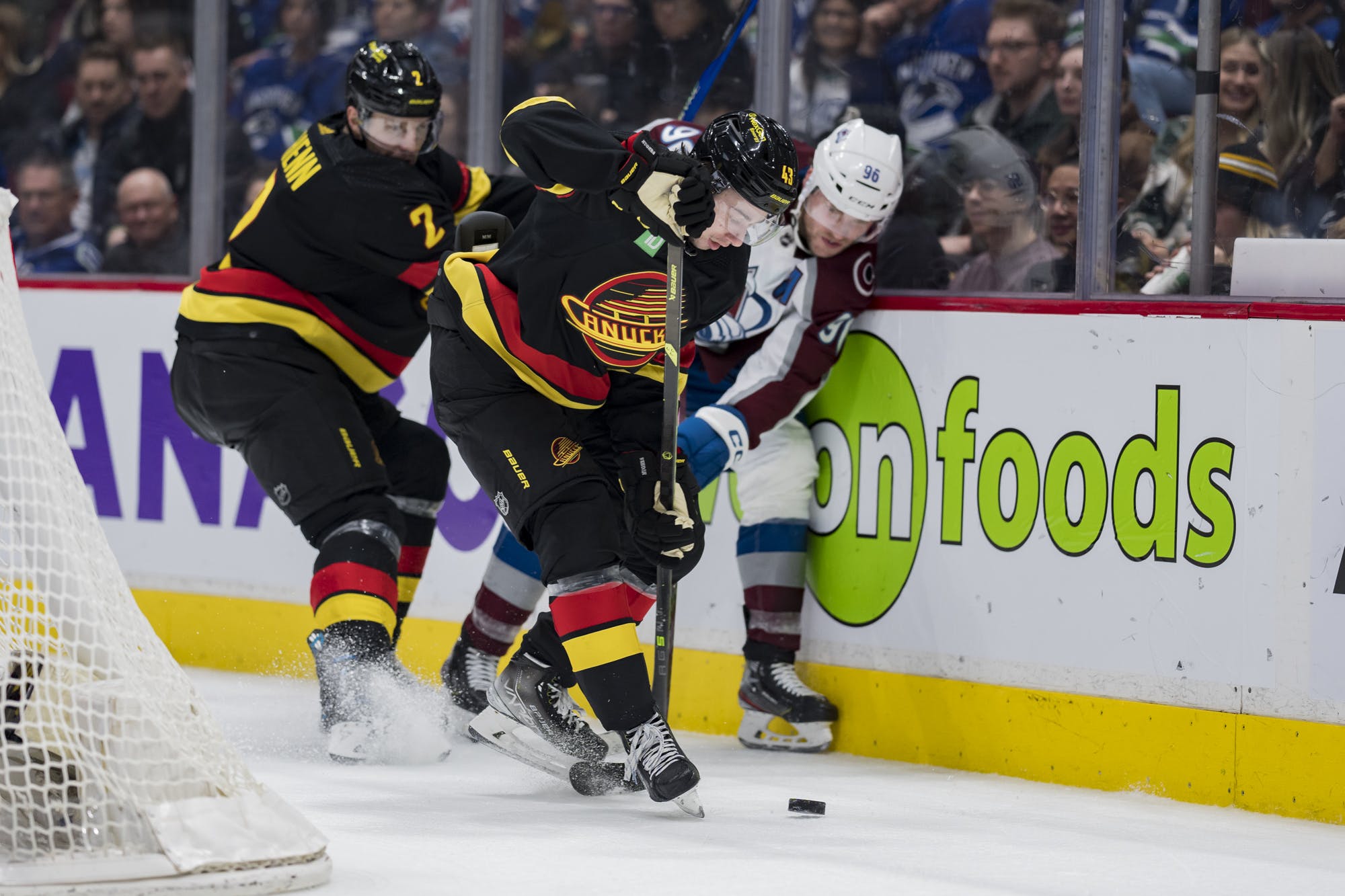 By Michael Liu
13 days ago
Be sure to check out NHL betting odds site Betway for the latest Canucks game day odds!
I mean, was this result anything that wasn’t expected?
The Vancouver Canucks lose another game, this time unable to complete the season sweep against the Colorado Avalanche in a 4-1 defeat. The most surprising thing was that the Canucks were even in the position to season-sweep the reigning cup champion Avs. Regardless, this loss once again showed the same characteristics of a team in freefall. Unable to match their opponents early, get a glimpse of hope because their opponent is in cruise control, and somehow delude management to thinking that this team is actually competitive. With a dead man walking at the helm of this team, it’s truly a miserable time to be a fan.
Here’s the loss by the numbers.
As always, you can find our glossary guide of advanced stats here.

The game flow paints an unsurprising picture. Thanks to two 5v3 man advantages, Colorado saw massive spikes in their xG and CF% trend lines. Even without them though, the Avalanche were controlling the flow of the game through the opening two periods. They averaged about 57 CF% in the first and second periods, a 22-15 scoring chance lead, and a 2.65-1.98 xG edge. Vancouver never really found an answer to match what Colorado had to offer.
And even in the third, where they played their best hockey, nothing of substance happened. Sure, the Canucks held a 68.00 CF% share — and even outchanced the Avs 10-2 with a 7-1 edge in high-danger chances — but they weren’t able to score at all. Colorado was content to sit back and let the Canucks have chance after chance, and this team wasn’t able to convert on any of it. But is that really a surprise with this group? 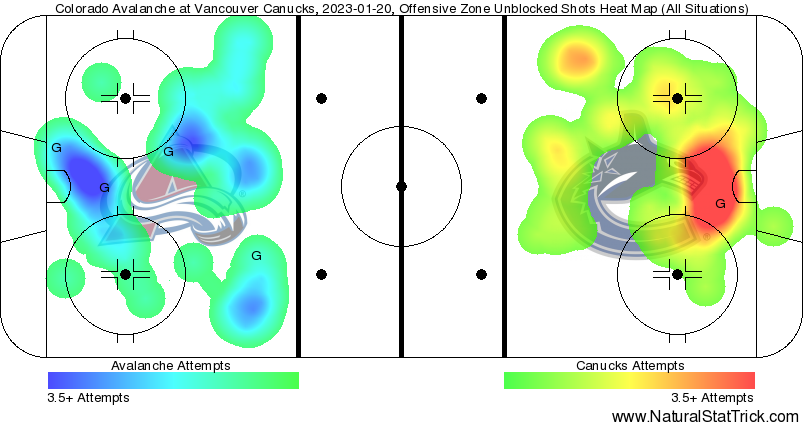 It’s a palatable heat map to look at from last night. Much of this comes as a function of the Canucks’ 16-9 lead in HDCF, which is surprising given the result of the game, but a good clump of their chances were in front at a concentrated rate. Realistically, this was as sustainable as it gets with this team, though as mentioned before, a large majority of their chances came in the third period when Colorado was just seeing the game through.
On the defensive side, the heat patch that the Avs got was relatively contained, even if it was a little dense. It’s good and all, but it still didn’t stop the four goals from getting past Colin Delia. At the end of the day, the Canucks’ defence didn’t do its job in preventing goals, though it was a better attempt than most games. If there’s any consolation, they didn’t get outplayed at even strength last night.

Corsi Champ: Conor Garland did his fair share last night. The analytics darling led all Canucks with a 70.37 CF% in 16:52 TOI, the winger finding more success as of late alongside JT Miller and Bo Horvat. They weren’t easy minutes either, as Garland found himself on the ice against Colorado’s top 6 for the majority of the night. Maybe he didn’t stand out on the scoresheet again, but then again, not many Canucks did last night.
Corsi Chump: On the other end of the spectrum, Luke Schenn brought up the rear on this Canucks team last night. His 30.00 CF% was a -27.35 CF% rel to the team average, which came with Schenn playing alongside Quinn Hughes. Most of their minutes came playing against the Avalanche’s top line and it showed in their metrics. Schenn had the second-most xGA (1.42), only behind Hughes’ 1.47. It definitely wasn’t his prettiest outing, though tough competition can explain the numbers.

xGF: Garland grabs another category in this game, topping the Canucks with a 79.57 xGF%. His 1.28 xGF was 5th on the team, while a 0.33 xGA put him as the 5th least. It’s a solid two-way effort that did see Garland not give up a single goal against, albeit with no offence to show for it himself. Garland finished the game with 11 SCF and 4 SCA, a 87.50 HDCF% showing that he was getting a good share of dangerous opportunities.
GSAx: Colin Delia did his best, but the numbers were yet again not kind to him. With 4 goals conceded to the tune of 2.91 xGA, his GSAx last night came it at a -1.09. A factor in this is probably the Avalanche’s lack of high-danger chances, thus impacting the xGf that he would be on the receiving end of. Colorado put 2 HDCF out of 8 past Delia, while a middle and low-danger goal snuck past him. Again, Delia did his best, but needed to be a lot better for the Canucks to be anywhere in this contest.

Solid outing by the fourth line: The fourth line got shuffled against pretty much every Colorado line, and somehow managed to be statistically the best Canuck line in terms of rate metrics. As a whole, Dakota Joshua – Curtis Lazar – Will Lockwood led Vancouver in CF% (77.78), xGF% (70.89), xGA (0.09), and SCF% (75.00). It’s pretty solid, all things considered, and especially in the context of the struggles they have faced in the last couple of games. Sure, they didn’t chip in offensively much, but a 0.23 xGF was just 0.05 behind the Kuzmenko-Pettersson-Boeser line in terms of contribution.
Speaking of Kuzmenko-Pettersson-Boeser: It wasn’t the usual numbers that they’ve been putting up or capable of. Actually, it was a pretty bad game from Kuzmenko-Pettersson-Boeser. They did get the only goal for, but against no real matchup, this unit was the worst Canuck line in CF% (35.29) and xGA (0.34). It’s especially surprising given Petterson and Kuzmenko’s penchant for being statistically solid even in the face of losses. Lehkonen-Rodrigues-Compher gave them the most trouble, which is not the usual calibre of competition that gives them pause. We’ve seen odd things happen this year though, so look at this result as an anomaly.
Tyler Myers’ brutal outing: It might’ve been the worst game that Tyler Myers has played in his career, and that’s just another notch in a couple of bad weeks for him. The defenceman was second last in CF% (35.71), but even though he was behind Schenn, the damage that the rate metric does over Myers’ 20:01 TOI is a lot more, especially given the fact that he does next to nothing offensively. A 30.82 xGF% makes him the third-worst Canuck last night in that regard to, coupling with the 2 giveaways that were attributed to him. At least his post game comments were interesting to listen to.

CF% – 45.07% HDCF% – 66.67% xGF% – 50.05%
It was yet another Canucks loss, right down to the formula. Go down early big, in a hole that is far too much to come back from, before finally managing to find some compete when the opposing team is coasting and making the game or score look a lot better than what it deserved to be. 4-1 was probably deserved, but looking back at the one goal losses that demarcated their road trip, and the pattern is still clear to see. It just feels like groundhog day, over and over again.
Vancouver returns to action tonight for the second half of a back-to-back, facing off against the Edmonton Oilers.
Stats provided by naturalstattrick.com
Editorials
Recent articles from Michael Liu