The Statsies: Canucks blow a multi-goal lead for the 10th time this season vs. Penguins 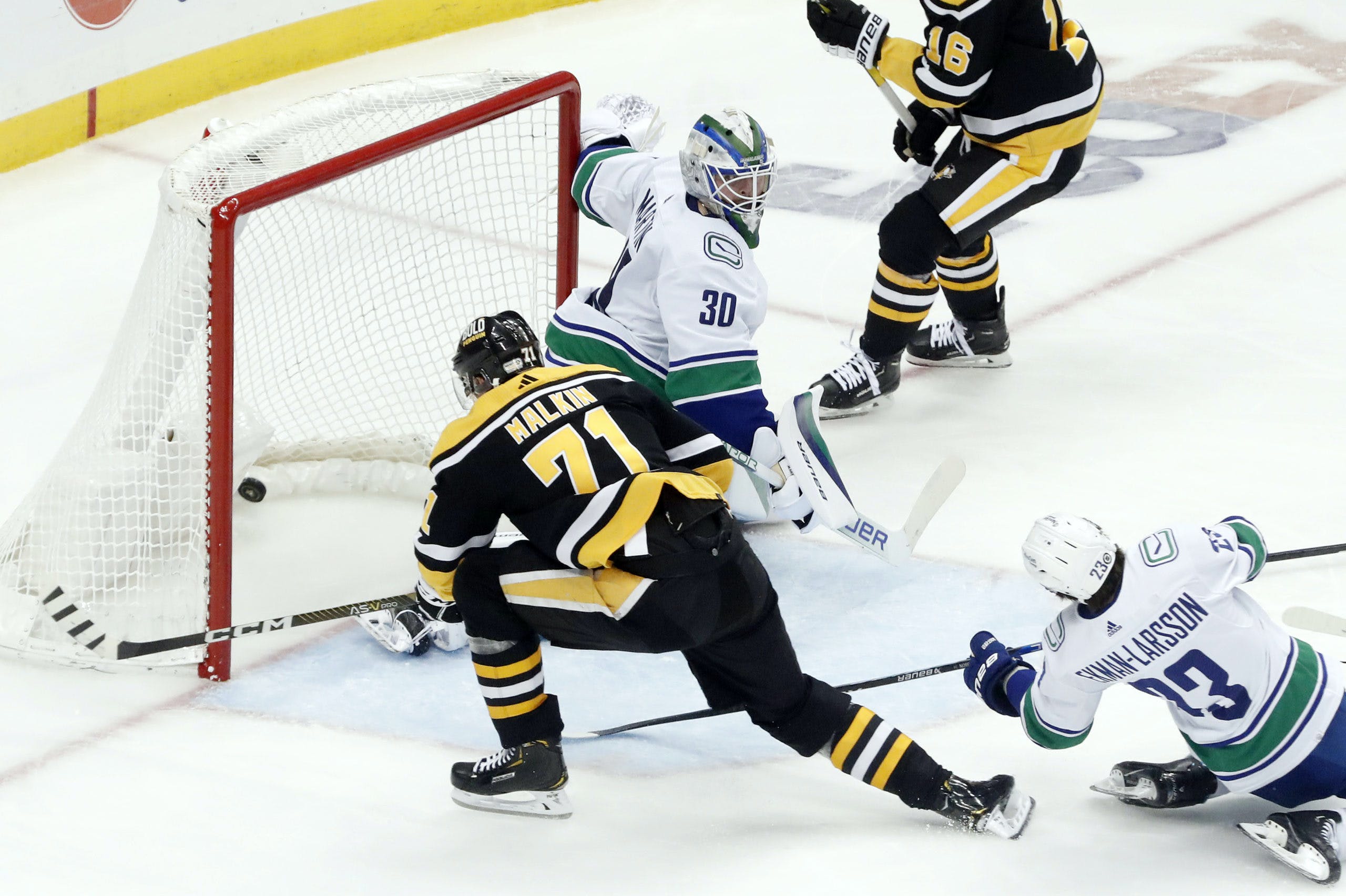 By Michael Liu
25 days ago
Be sure to check out NHL betting odds site Betway for the latest Canucks game day odds!
For eight minutes, this team looked unstoppable. Then the glass slipper got smashed to pieces.
The Vancouver Canucks decided to stop playing once they reached a 3-0 lead, losing to the Pittsburgh Penguins 5-4 after giving up five unanswered tallies. This loss marks yet another chapter in a season of underperformances, where the Canucks find themselves closer to the San Jose Sharks in the bottom of the standings than their expansion neighbours Seattle Kraken in 10th. There’s a lot to get to in this one, so without further ado:
Here’s the loss, by the numbers.
As always, you can find our glossary guide of advanced stats here.

It’s painful to see the cluster of three Canuck goals, and then what happens after it. Vancouver surprisingly got off to a good start on the road, though it makes sense with recent trends in their previous games. However, all of that was for naught as soon as Pittsburgh got their goal on the long man advantage. At the end of the first, the tides were completely in the Penguins’ favour, finishing with a 71.11 CF% share while out-chancing the Canucks 23-7. The three goals were entirely erased by the 13 high-danger chances Pittsburgh got, ones that they made sure to capitalize on.
An interesting detail in this flow chart is how Vancouver couldn’t even manage to generate much on the power play. Recently, it’s been customary for this Canucks team to be outplayed at 5v5 but hang in there thanks to their special teams. Last night that wasn’t the case, as they couldn’t get much of anything going in response. When looking at the time they spent on the power play, the Canucks couldn’t get anything going. That line remains nearly straight during all their man advantages, suggesting that even with the power play, Vancouver couldn’t get much puck possession or chances towards Dustin Tokarski. 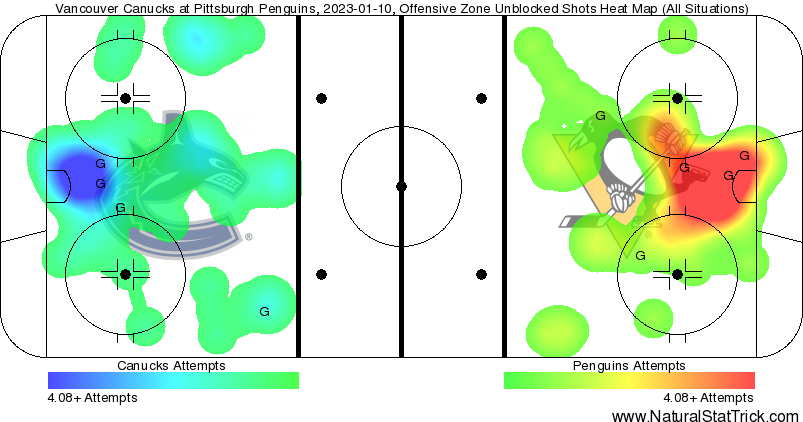 Hey, at least the Canucks didn’t just get out-played at 5v5 in this one. Across all situations, the Penguins were just… better. Vancouver bled high-danger chances and didn’t get many of their own, to the tune of a 29-13 advantage for Pittsburgh in the HDCF category. Once more, this team seems unwilling to make adjustments or changes to their structure to help support their netminders. There’s only so much Spencer Martin can do when the slot area is a lake of fire in front of him.
There wasn’t a single period that the Canucks controlled the xGF% balance, and for good reason. When you’re only getting 13 HDCF over 60 minutes, it doesn’t suggest a good picture when it comes to a volume of good scoring opportunities. In fact, when counting all scoring chances, Pittsburgh doubled Vancouver’s total of 25, still out-chancing them 17-10 in the third period when the Canucks were allegedly pushing back.

Corsi Champ: This game’s champ goes to Brock Boeser, coming in with a 61.29 CF%. He’s put together a couple of decent performances in a row now, and a two-point night against the Penguins will go a long way to bringing his confidence (and trade value) back up to expectations. Boeser held a 27.14 CF% rel to the team average while maintaining a 71.43 shots for %, which easily led the rest of the Canucks. The winger also happened to be one of only 6 players who weren’t on ice for a goal against, probably due to efforts like these.
Corsi Chump: Bruce Boudreau might need to reconsider the fourth line’s deployment, because they are starting to eat it. Curtis Lazar once again finishes last night as the Corsi chump, his 22.22 CF% coming from a disastrous 10:46 against the Penguins’ top six. Sidney Crosby finished with a 100.00 CF% when up against Lazar, meaning that the Canuck literally did not touch the puck while he was on ice. Lazar also had the worst xGF% share amongst Vancouver players, finishing with a 14.71 xGF% due in large part to a 1.35 xGA. Since Lazar isn’t exactly known for the offensive bit, it makes sense why his metrics were sunk as much as they were.
And hey, at least he wasn’t on ice for a goal against. The same can’t be said about the dishonourable mention Tyler Myers, who was second-last in CF% (25.53) and gave up four goals against. In fact, owing to more ice time, Myers finished with a worse CF% rel (-27.50) than Lazar, indicating that he had more of a negative impact in more minutes. Myers finished with the worst xGA (2.59) on the team, the worst scoring chances against (24), and the worst high-danger chances against (15). Quite literally, Myers was a walking disaster against the Penguins. The eye test showed it, and the stats quantify the extent of his putrid performance.

xGF: There shouldn’t be much of a surprise here either, as Boeser nabs the team lead in xGF against Pittsburgh as well. His 55.56 xGF% isn’t too impressive from the outset, but considering how badly this team was outchanced, it honestly is pretty good. In fact, that number puts Boeser at a 25.35 xGF% rel, the only Canuck to crack a 20% positive increase in xGF when on ice. Even with that, Boeser was on ice for 10 scoring chances against, of which 5 were high-danger. Truly just not a great game for everyone, though Boeser did the best that he could.
GSAx: In a game where your offence gets you 4 goals, and yet you still lose the game, eyes naturally will turn to the goalie. Five goals against isn’t the best look for Spencer Martin… and yet, this really wasn’t a game where he let the Canucks down. In fact, the Pittsburgh Penguins generated 4.69 xGF against Martin, converting on their chances to put five past him. Martin’s -0.31 GSAx is marginal, and really can’t be blamed for the team’s collapse in front of him. Only one goal against was middle-danger, the rest coming from high-danger areas. And when a goalie faces 19 HDCA, your team defence needs a good shake of the head. Martin did the best he could with what he was given.

In which every line was dog****: You’re gonna need a censor for that one Quads. At 5v5, Boudreau didn’t put the lines in a blender — and yet somehow, the results made it seem as if he should’ve. Every single Canucks line, from first to fourth, was heavily out-possessed. They finished with eerily similar CF% numbers, all coming out to about 33.33 CF%. The only line to do anything offensively was the Kuzmenko-Pettersson-Miller line, racking up 54.06 xGF% with a 3-1 HDCF advantage. Garland-Dries-Lockwood was impressively poor, a 1.73 xGF% telling the entire story about some anemic chance generation. Not a single combination was clicking, and not a single thing was done about it. Maybe this was the stealth tank all along.
$13.26 Million could literally get you Toews-Makar: And yet the Canucks have a $13.26 million pairing at home. Pairing is putting it generously though, as OEL-Myers once again turned in a performance for the low-light reels. Together, the much-maligned pair threw up a 14.29 CF%, 19.94 xGF%, 21.43 SCF%, and 14.29 HDCF%. To sum it up, OEL-Myers essentially gave the Penguins an 80% share of puck possession, scoring chances, and expected goals whenever they were on ice. Not really optimal for winning hockey games, especially when it comes from players with defence in the name of their position.

CF% – 41.59% HDCF% – 30.95% xGF% – 35.60%
Just when you think this team can’t lose games in any more embarrassing fashion, they just go and do it again. The Canucks continue to surprise and break records in the worst possible manner, with the 5-4 loss against the Penguins being yet another jewel on the copper crown they’re building. It’s remarkable to see them not making many adjustments or changes, with little to no improvements observed in any major category. But maybe that was the goal. After all, this is a team that just needs to build, right?
Vancouver continues on its rapidly slumping road trip, rolling into Tampa Bay to face off against the Lightning on Thursday.
Stats provided by naturalstattrick.com
Editorials
Recent articles from Michael Liu