The Statsies: Canucks take advantage of the chances they got against the Kings By Michael Liu
2 months ago
Welcome to The Statsies, brought to you by NHL odds site Betway!
Nothing like a big win to end the week.
The Vancouver Canucks returned home and took care of the LA Kings 4-1 in as clean of a game as they had played in a while. They got out to a lead and managed to retain it, though it wasn’t pretty at times. There’s still some concern, but a win is something to be celebrated this season.
Here’s how the game played out, by the numbers.
As always, you can find our glossary guide of advanced stats here.

This game flow is an example of being opportunistic. Vancouver probably deserved to have a goal by the end of the first, but it was when the Kings got a swing in puck possession and expected goals that the Canucks were able to strike. There wasn’t a period of time in the second or third where Vancouver was dominated, but there also wasn’t a moment where they ever seemed in control.
That peaked in the third period, when LA desperately tried to push for a goal. After going down 4-1, the Kings pretty much had the lion’s share of CF and xG, which contributed to that massive downward slope seen in the final frame. LA put 20 scoring chances on goal, with eight of them being high-danger. In comparison, Vancouver had four scoring chances with one considered high-danger. Good goaltending does go a long way. 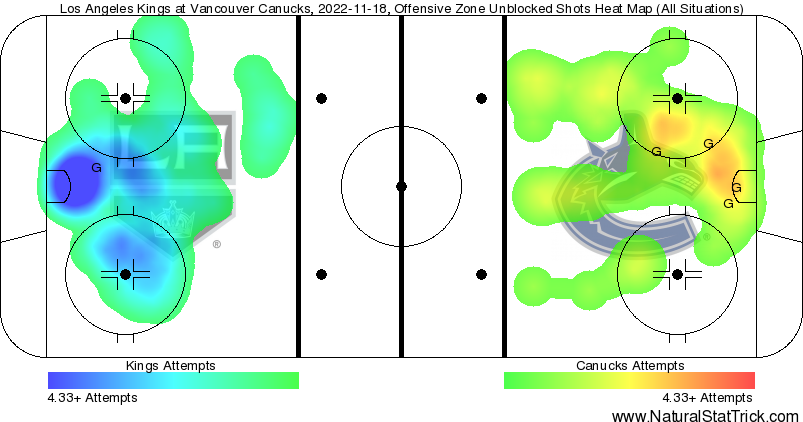 Not a great heat map to show in a 4-1 win. The Canucks didn’t establish a hot spot in the offensive zone, which isn’t the best in most games. They managed to win but there should be some concerns over how sustainable their shot attempts are. Perhaps this could also be attributed to the Kings making the proper defensive adjustments, forcing the Canucks to the perimeter and denying them shooting lanes.
On the flip side, Vancouver gave up another bubble around their crease. However, this time, they managed to get a couple lucky bounces and a ton of great goaltending. The Kings’ only goal came off a deflection, which says a lot about how solid Thatcher Demko was in keeping those in-tight chances out of the net. The density of chances in front of their own goal should also be a point of note for the Canucks, even in this win.

Corsi Champ: He’s baaaaaack. Andrei Kuzmenko returns as the Corsi champ after some subpar games by his standards. The Russian led the Canucks with a CF% of 58.33, dropping two assists along the way. The Kuzmenkshow also returned to his usual ice-time distribution, coming in at a 14:39 last night. It lines up with the quality that he showed all throughout last night.
Special shoutout to the close finisher in second place. Brock Boeser wasn’t exactly having the return of dreams, but against LA he was able to find a big spark. His 57.14 CF% comes with a line that finished sub 50 in CF%, so that in and of itself is pretty impressive. Boeser’s first two goals of the season will hopefully prove to be the dam-breaker for him, as he’s chasing 30 on the season.
Corsi Chump: Chaos Giraffe decides to go negative. Tyler Myers brings up the rear of the pack in CF%, coming in at a whopping 29.73. That puts him at a -22.22 CF% rel, about a quarter worse puck-possession-wise than the rest of his team. It shouldn’t really be a surprise, as Myers’ aggressive chaos does not mesh well with Riley Stillman’s pizza delivery service. It does become concerning that he’s seeing 18:34 of ice however, as his weaknesses are more exposed for the other team to exploit without an adequate defensive partner.

xGF: Kuzmenko’s very nice xGF% of 69.27 puts him as this game’s leader. He was a comfortable 12 percentage points ahead of the next closest teammate, with an xGF% rel of 38.46 demonstrating the positive impact that he made while on ice. Kuzmenko’s great xGF% also comes because of good defensive metrics, where he posted a team-low 0.22 xGA. A great performance after some rocky outings to close out the road trip.
GSAx: Demko had himself a night. He looked like the Demko that we all saw last season, playing some incredible hockey while also getting some earned luck along the way. With the Kings posting 3.57 xGF, Demko managed to record his first positive goals-saved above expected with a solid 2.57. It’s a return to form that the Canucks have been sorely needing, and the team will hope that this becomes the norm, and not an anomaly. Demko was perfect all night from middle and low-danger, with the only shot getting past him considered high-danger.

Please break up the third line: Though Boeser had himself a game, the entire Höglander-Dries-Boeser line was genuinely not great. In their 7:48 minutes together, this unit was team-worst in CF% (42.11), xGA (0.63), and conceded a team-high in scoring chances against (8), tying for the team-high in HDCA (3). They looked lost in the defensive zone, and even despite a goal, I really don’t think this line should be a long-term option for the Canucks. Höglander in particular needs to figure it out, with some pretty dismal counting stats last night.
Defencemen struggles: It’s like beating a dead horse, but Oliver Ekman-Larsson and Riley Stillman need a stern talking to or something. Against the Kings, both defenders looked like liabilities. OEL posted a team-worst 1.55 xGA at 5v5 play with 14 SCA. Stillman wasn’t far behind, giving up 13 SCA in 15:28 of ice time. The Stillman-Myers pairing is just not working, but what’s interesting is that the OEL-Bear pairing is the only pairing that makes OEL seem competent. In their 17:34 together, the two held an even CF% while actually outshooting the Kings along with it. It feels as if Bear is doing his best to get this pairing to tread water.
Neutralizing the top line: JT Miller, Bo Horvat, and Conor Garland put up a team-worst 24.32 xGF%. It sounds pretty bad, but the context makes it better. Miller-Horvat-Garland was stapled against the Vilardi-Kopitar-Kempe line, playing exactly the same ice time as their LA counterparts. They gave up a lot of shots and chances against to them, but defensively, they kept them to only 2 HDCA. It’s a solid night’s work that doesn’t show up on the scoresheet, but a critical role to play in the grand scheme of things. It also lends more credence to the fact that Miller’s defence isn’t bad – when he’s played like a winger.

CF% – 44.74% HDCF% – 33.33% xGF% – 35.71%
The analytics don’t look pretty for this one, but the Vancouver Canucks came out and played an opportunistic game to beat the Kings at home. They had their best players playing like their best players and got a vintage Demko performance to boot. Pretty much the blueprint of how this team wanted to start off the season, instead of what they got.
The Canucks are back in action at home, taking on the best in the Pacific Vegas Golden Knights on Monday.
Stats provided by naturalstattrick.com
Editorials
Recent articles from Michael Liu