The Statsies: Canucks only show up for 20 minutes again, but don’t win this time 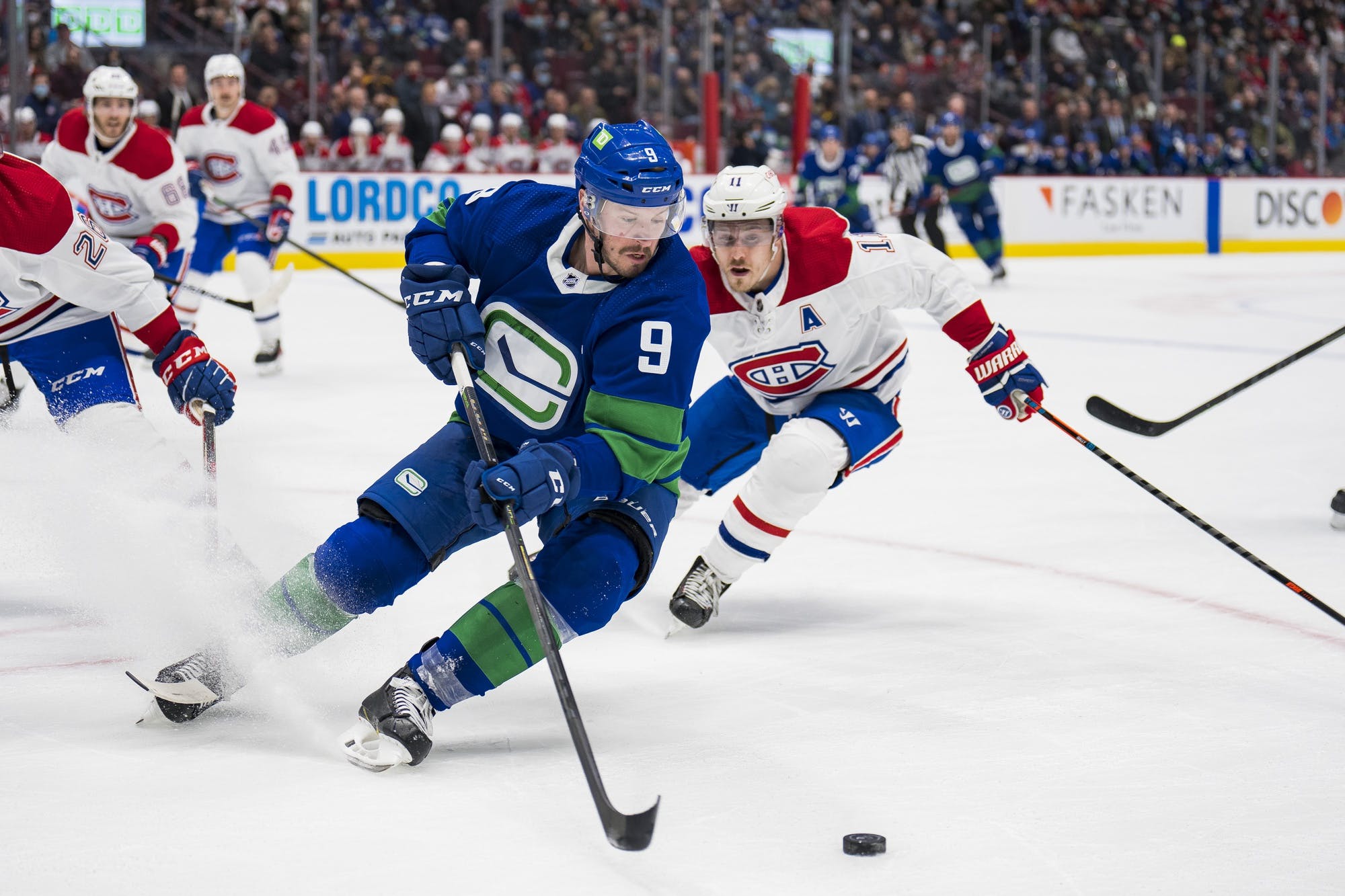 By Michael Liu
2 months ago
Welcome to The Statsies, brought to you by NHL betting site Betway!
“To you from failing hands we throw, The torch; be yours to hold it high.”
Emblazoned on the Montreal Canadiens’ dressing room is this excerpt from John McCrae’s “In Flanders Fields.” Ken Dryden described this conceptual passing of the torch as something that anybody does to whoever comes next. “Those who set a certain standard and generated a certain expectation.”
Maybe that explains why the Canadiens actually showed up on time for the game.
The Vancouver Canucks rolled into the Bell Centre and were defeated by an allegedly rebuilding Habs team, losing 5-2 after being down 4-0 at one point. A strong third made the scoreline look more respectable, but make no mistake, the Canucks did not look like a team with postseason ambitions.
Here’s how this game played out by the numbers.
As always, you can find our glossary guide of advanced stats here.

There are no surprises with how this game flow looks. A couple of weaker goals early on seemed to deflate whatever momentum the Canucks brought into the night, as the possession and expected goals shifted away from their control. The worst of it came during the second period, with three power plays in a row firmly turning the tides against Vancouver. The Canadiens ended up finishing the second with an xGF of 1.81, in comparison to the Canucks’ xGF of 1.
But in the third, Vancouver puts on possibly their most dominant showing in a third period all season. The Canucks demolished the Habs in CF% (78.79 to 21.21), SCF% (66.67 to 33.33), and xGF% (75.12 to 24.88). They managed to get two goals out of it, but it was too little, too late. It says a lot when a team puts up an xGF of 1.24 in the third, while combined through the first and second the xGF was only 1.49. Vancouver is not good enough of a team to only show up for the final 20 minutes. 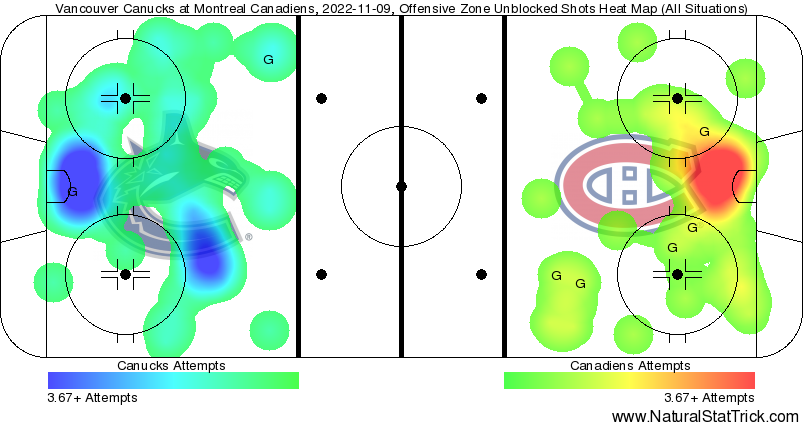 This heat map would be a pretty good one if the Canucks didn’t give up 5 goals against the Habs. There isn’t too much to pick apart here, with Vancouver able to get chances in those high-danger areas while preventing Montreal from ever establishing a hot spot offensively. The lighter red should represent decent work in front of the net to prevent scoring opportunities in tight.
Unfortunately, the Canucks did in fact concede 5 goals to the Habs. All of them came from areas which aren’t considered high-danger on an xG model, and mostly from areas Vancouver didn’t allow a lot of shot attempts from. Something has to be said about the defensive organization of this team, if this becomes a common occurrence.

Corsi Champ: Elias Pettersson recorded one assist against the Habs but deserved so much more. He continues to be an excellent play driver through this season, posting an 86.21 CF% to lead all Canucks last night. Pettersson recorded 25 CF and only 4 CA, with an absurd 93.75 shots for%. He was also fourth on the team in SCF (10) while yielding only 1 SCA, giving him a team-leading SCF% (90.91). If there are two things that Pettersson wasn’t the best at, it was his faceoff percentage (38.46) and that only three of his scoring chances were considered high-danger.
Corsi Chump: Jack Studnicka earns this game’s Corsi chump award, bringing up the rear of the team with a CF% of 35.00. The fourth-liner got shelled against the Habs, giving up 7 SCA in 12 minutes of play, with 4 of those chances being of the high-danger variety. Studnicka looked to be on the ice the most against the second line of Mike Hoffman-Christian Dvorak-Brendan Gallagher, which might explain why is numbers are a little depressed.
There is a dishonourable mention here in the form of Vasily Podkolzin. Though he remained alongside Conor Garland and Bo Horvat, Podkolzin came in a close second-last with a 35.14 CF%. Granted, the entire line wasn’t the best, but considering that both Garland and Horvat posted better possession numbers away from Podkolzin than with him at 5v5 (Garland – 33.33 with, 45.45 without; Horvat – 25.00 with, 85.71 without), there should be some concern regarding his effect alongside them.

xGF: This one also belongs to Pettersson, who played not only well in the offensive zone but was also extremely defensively responsible. His 88.99 xGF% is excellent considering how badly outchanced the Canucks were early in the game, and also suggests that Pettersson played a key role in helping turn the tides in the third. His 1.19 xGF might’ve only been third on the team, but his 0.15 xGA shines through as the second-highest, leading to the percentage that you see in the xGF%. These numbers also come with a relatively even distribution of deployment, indicating that Pettersson did not receive much benefit from starting in the offensive zone.
GSAx: Oh man. Thatcher Demko continues to punch himself lower and lower on the rungs of NHL goalies. The Habs only posted an xGF of 2.88 throughout the game, and since Demko conceded 5 goals against, he’s once again giving up a negative goals saved above expected with a -2.12 GSAx on the night. While not all the goals were his fault, it does stand to reason that Demko should be better than this. No high-danger chances beat him, but three of the goals were middle-danger and two of them were low-danger. Concerning, to say the least, as Demko is a close second-last in the league with an GSAx of -10.99. The only goalie worse is Elvis Merzlikins’ -11.02.

Jack Rathbone’s rough night: Rathbone’s advanced stats are buoyed by the fact that he’s a very good offensive defenceman. At 5v5 play, he was third in xGF (0.98) across the entire team, and most of his possession stats range from okay to good. However, there’s still a lot of work to be done in his own zone, especially with defensive coverage. Rathbone didn’t do anything of note in the defensive zone, except for a bad giveaway leading directly to a Habs goal and losing track of his man on the 5-2 goal. An xGA of 0.96 nearly wipes out all the good that Rathbone was able to contribute offensively.
Removing Tanner Pearson: After Tanner Pearson left the game with an injury, we got a chance to see a new line combination in its place. Andrei Kuzmenko found himself on the left wing with J.T. Miller and Brock Boeser, and the line produced better puck possession results with him on it. In their 3 minutes together at 5v5 play, the Kuzmenko-Miller-Boeser unit posted a 83.33 CF% in comparison to 77.78 with Pearson alongside. They didn’t manage to achieve the same success in the xG department, but it’s a combination worth trying out to see if they can get any sustained results.
The Swedish Connection: Thanks to Kuzmenko shifting to a different line, Nils Höglander drew in to play with Elias Pettersson and Ilya Mikheyev. It turned out to be a pretty good decision, with the line recording the second goal of the night. In fact, Höglander-Pettersson-Mihkeyev led the Canucks in xGF (0.51) with two high-danger chances recorded. It’s been a tough year for Höglander, so seeing him active and buzzing alongside Pettersson is good to see. Vancouver will want and need more of the same, especially as he looks to earn a firm place in the lineup.

CF% – 57.28% HDCF% – 50.00% xGF% – 48.73%
The Vancouver Canucks did not start on time and paid for it dearly, despite a good effort in the third period. The most frustrating thing is that the third period gives a glimpse of how good this team could be — but they cannot seem to piece together a consistent 60 minute effort. Montreal capitalized on the opportunities they got, taking full advantage of their slight edge in xGF.
Next, the Canucks head into Toronto to take on the Maple Leafs on Saturday.
Stats provided by naturalstattrick.com
Editorials
Recent articles from Michael Liu