The Statsies: Brock Boeser’s bounce back not quite enough for the Canucks win 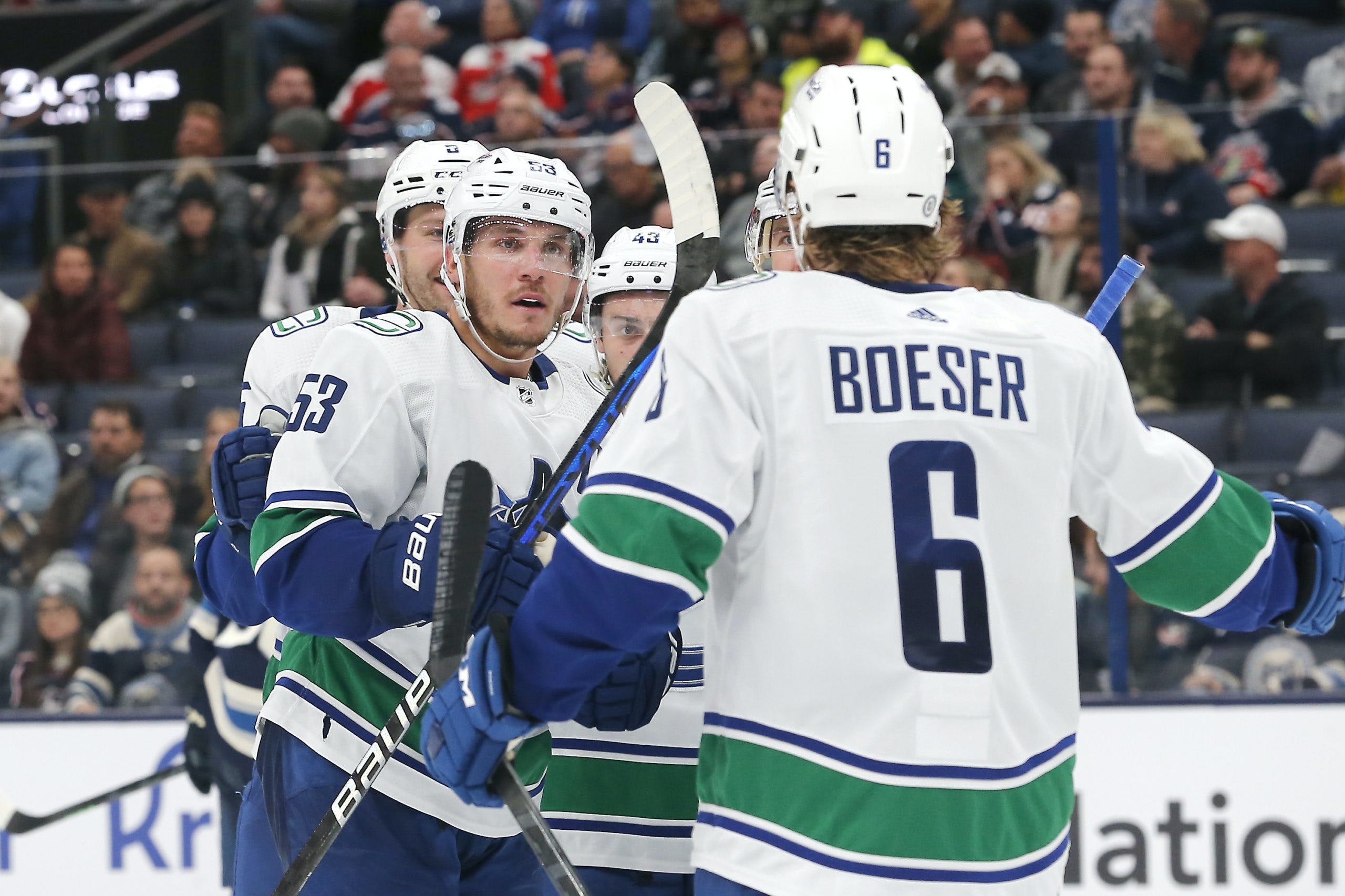 By Michael Liu
3 months ago
A historical day for the Canucks.
Vancouver blew their 4th multigoal lead in the same amount of games, dropping a 4-3 decision in overtime to the Columbus Blue Jackets. It was a decent effort, especially at the back end of a back-to-back, but the returns have not been very good result-wise.
Here’s how the loss played out, by the numbers.
As always, you can find our glossary guide of advanced stats here.

The Canucks once against got out to a hot start, scoring twice in the opening frame to take a 2-0 lead into the second. Up until about 2/5ths of the way through the middle frame, the possession and xG numbers remained pretty much even. Both teams were evenly matched and it never felt as if CBJ or Vancouver ever truly got the upper hand.
However, somewhere along the line, the balance of the chances and possession shifted to the home team. It makes sense, Columbus being a rested side and the Canucks banged up and in the second game of a back-to-back. They got pushed back in expected goals and possession all the way until overtime ended. Vancouver did fight back slightly in the overtime frame, but it wasn’t enough to stop them from picking up their 4th consecutive loss. 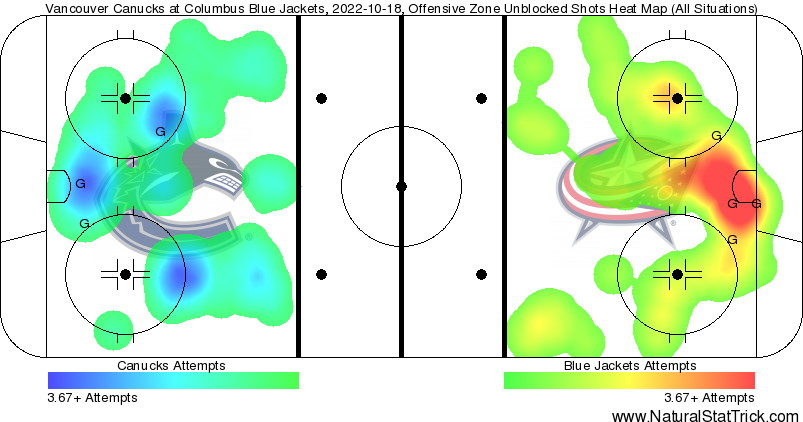 Vancouver did a better job today in getting those high-danger net front chances. The thicker blue in front shows that they had a decent concentration of attempts right in the low slot, while two other hot patches are in the right and left faceoff circles. This could be something they game-planned specifically for, exploiting a weakness in the Columbus defence.
However, like in all the games before, the Canucks are bleeding their own high-danger opportunities from in front of their goal. It appears that the Blue Jackets got more density than the Canucks in front of the net, which isn’t good news. It also doesn’t help that all four goals were pretty much from that area, showing another weak spot in Vancouver’s defensive scheming.

Corsi Champ: This game’s winner is Brock Boeser, who looked significantly better against the Blue Jackets than the Capitals. He comfortably led the Canucks in CF% (65.63) in a game where they otherwise couldn’t hold on to the puck very well. Boeser also managed to lead the Canucks in HDCF% (66.67), indicating that he generated more high-danger chances than he faced. This is far cry from the previous game’s performance, and should be taken as a good sign going forth.
Corsi Chump: It’s a dead heat between Nils Åman and Dakota Joshua for this one, with both forwards finishing with a team low of 25.00 CF%. However, Åman would edge Joshua based on CF% rel, where the Swede was a -30.06 on the night. It’s tough, because he looked engaged all night, skating well and getting some good sticks on pucks. That being said, Åman conceded 8 scoring chances in his 10:57 on ice time, with 5 of those chances being high-danger. Hopefully he’ll bounce back from this performance in the final game of the road trip.
xGF: It’ll be Brock Boeser taking this one again, with an excellent 70.69 xGF% demonstrating good shot selection and a solid defensive effort to suppress any Columbus chances while on ice. In fact, Brock conceded 5 scoring chances all game, with only one of them considered high-danger. On the other hand, he was on ice for 8 scoring chances for. In terms of raw xGF, Quinn Hughes led the Canucks with a 1.16, but also gave up an xGA of 1.32 to push his xGF% lower.
GSAx: Spencer Martin has turned in the best statistical performance by a Canuck goaltender this year. As sad as that sounds, Martin posted a -0.91 GSAx, meaning that he conceded just under one goal above expected. It’s all a team could really ask for in a backup, as he kept Vancouver within striking range even as the tides of the game turned against them. Really, a solid start by the veteran #2, which even included stopping a 3-0 in overtime.

The Pettersson Factor: Going into the game, there were some concerns when Elias Pettersson and Andrey Kuzmenko were split up after being some of the lone bright spots to this rough skid. While Kuzmenko didn’t fare too poorly for himself, it was Pettersson that demonstrated play-driving ability this time around. The Hoglander-Pettersson-Podkolzin line led the Canucks in CF% (49.83) and overall looked like a threat to score every time they were on ice. Pettersson has looked good to start the year, tallying his 100th goal against the Jackets, and hopefully that can translate to some results in the win column.
Bounceback: Last Statsies, I was critical of the Pearson-Horvat-Boeser line. This time around, they decided to make me eat my words, playing their best game of the season thus far. Though they were a tight second in CF% (48.79), this line led the Canucks in xGF% (38.95), xGF% rel (1.61), and HDCF% (51.29). It’s interesting to see such a reversal by the same combination of players, especially on the second half of a back-to-back. In theory, this line probably should’ve seen their numbers suffer, since Pearson and Boeser aren’t exactly the best of skaters. Regardless, it was a good effort by this group that was sorely needed to push the game into overtime.
Changing up the 4th: While the fourth line had some moments, they’re clearly getting progressively overmatched as the season has worn on. This unit finished dead last in every metric by a significant portion (CF% -18.02, xGF% – 21.60, HDCF% – 33.57), spending 7:12 minutes on ice at 5v5 play. Boudreau should be looking at possibly switching things up as they haven’t been very effective lately.
Chaos Giraffe’s return: The return of Tyler Myers to the Canucks’ lineup was met with some cheer, and he didn’t do poorly either. Myers tied for least scoring chances against amongst defencemen (7) and the least high-danger chances for (3). His CF% wasn’t great (42.86), but having him back in the lineup was critical in helping push players back into appropriate roles. This lighter matchup allowed Tucker Poolman to be above 50% in his CF% for the first time this season, which is important for depth puck possession in the lineup.

CF% – 48.67% HDCF% – 35.00% xGF% – 38.44%
The Canucks played well in the first and got themselves in front, but as fatigue caught up to them, so too did the Blue Jackets’ onslaught. Columbus outpossessed, outchanced, and finally outscored Vancouver to record their first win of the season. As for the Canucks, they head now to face another winless team in the Minnesota Wild on Thursday to close out their road trip.
Maybe things will be different this go around.
Stats provided by naturalstattrick.com
Editorials
Recent articles from Michael Liu