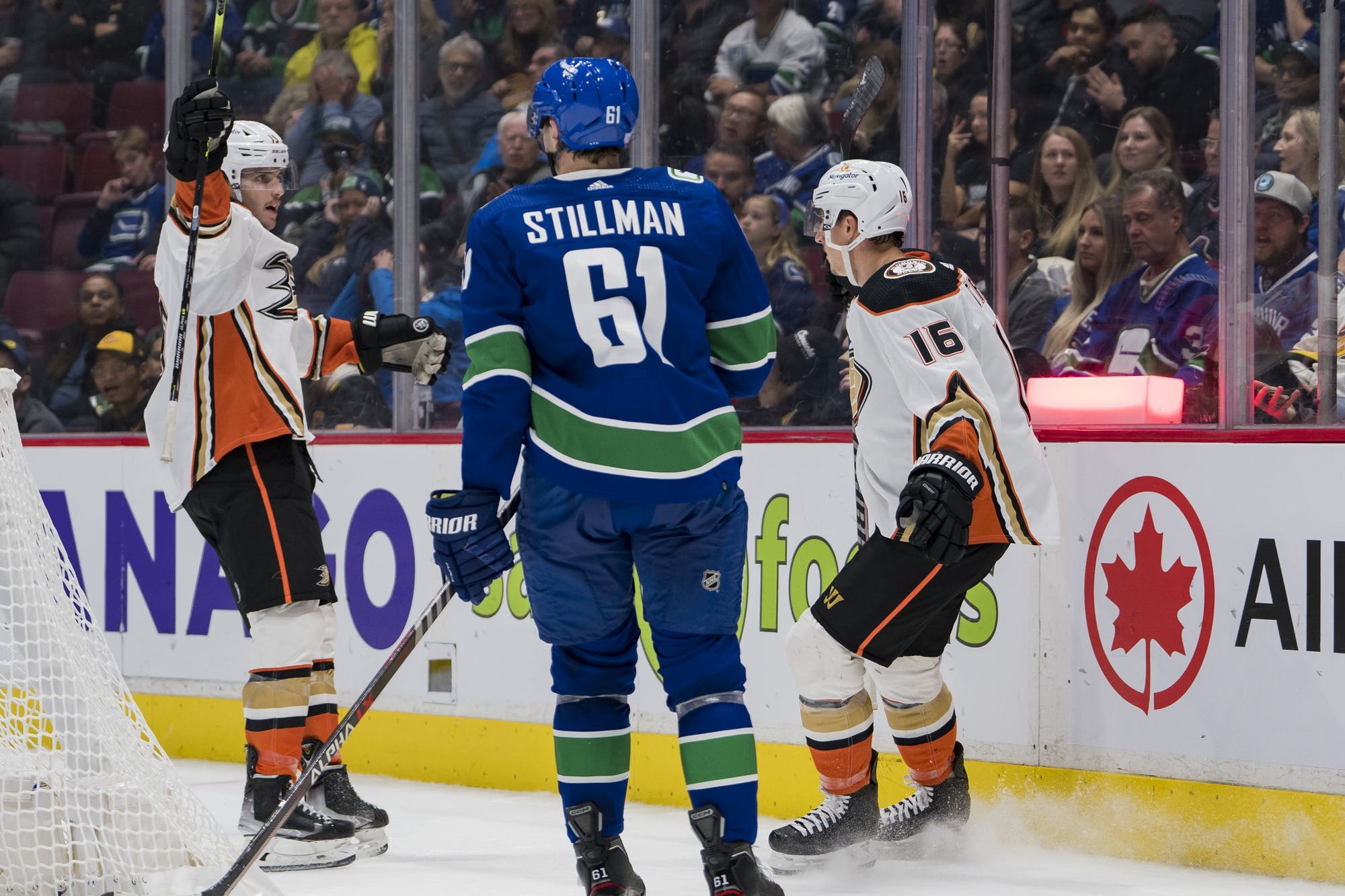 By Stephan Roget
2 months ago
In terms of quantity, the Vancouver Canucks have made plenty of headway in fixing their much-commented-upon blueline.
Quality remains a work in progress.
Within a single offseason, the Canucks have gone from having a dearth of NHL defenders to now having an even ten of them on the active or injured roster. Of course, with only six D able to dress each night, there’s only so much that an abundance of extras can do for a team, especially when the rotation is not as consistent as it could be.
Some fans have been frustrated at Jack Rathbone and Kyle Burroughs’ recent inability to escape the pressbox, where they’ve been relegated as healthy scratches for three games running (as of this writing.)
In their place? The established and so-called top-four of the Canucks — Quinn Hughes, Luke Schenn, Oliver Ekman-Larsson, and Tyler Myers — along with two newly-acquired defenders in Ethan Bear and Riley Stillman.
Now, Bear was just acquired after not having played at all in the season’s early going, and has shown well thus far, so no one is advocating for him to lose his spot in the lineup, at least for the time being.
Seeing Stillman dress night-in and night-out, however, in place of other options, is becoming a tougher pill to swallow.
Whereas quality has been an issue all over the Canucks’ blueline so far in 2022/23, Stillman might be the worst-performing of the bunch, and his continued inclusion in the lineup smacks of the sunk-cost fallacy.
Stillman was the among the more porous members of an overly-porous Chicago blueline in 2021/22, and yet the Canucks still paid a second round pick premium for the privilege of dumping Jason Dickinson’s contract and picking up Stillman’s at the outset of the season. It shouldn’t come as too much of a surprise that Stillman has continued to struggle in Vancouver, but the sheer magnitude of that struggle has likely caught even the Vancouver front office off-guard.
Stillman’s advanced statline is all in the red, and several key measures, including his control of scoring chances (41.49%) and high-dancer chances in specific (43.18%) are actually worse off than they were in Chicago.
But by far the most eye-catching stats are Stillman’s raw results at 5v5. There, he’s been on the ice for three Canucks goals and nine against in just eight games played. Only Ekman-Larsson (12) and Hughes (ten) have been on the ice for more even-strength goals against, and they’ve each played about double the minutes that Stillman has, thus far.
That’s a rate of about a goal against for every ten minutes of 5v5 play that Stillman has been on the ice for. That’s not a good rate.
Those minutes, too, have been limited and heavily sheltered. He’s bleeding those goals against while playing an average of 13:59 a night, with 57.8% of his shifts starting in the offensive zone and almost all of them matching up against bottom-six competition.
All that, and yet Stillman is still getting eviscerated.
Unfortunately, the eye-test doesn’t do much to counter the narrative of Stillman needing a break from the lineup.
Stillman keeps getting caught taking classes from the Erik Gudbranson School of Losing Your Checks in the Defensive Zone, and the amount of turnstiling going on is borderline disturbing.
If he’s not getting caught out of position, he can often be found making the kind of inexplicable decisions that Vancouver fans begrudgingly accept from Tyler Myers, but that realistically have no rightful place coming off the stick of a genuine NHL player.
And then there’s the pinches. Whether in the attempt to throw a “big hit” or just because, Stillman getting caught up ice is definitely starting to become a problem.
None of which is to say that Stillman is an irredeemable asset at this point, or that he deserves to be permanently removed from the lineup, or even that the options waiting in the wings to replace him are of much guarantee to be dramatically better.
Everyone wants to see the rookie Rathbone freed from the pressbox, but in many of those same analytical regards, Rathbone has performed as poorly, if not worse, than Stillman thus far on the season.
Burroughs, meanwhile, suffers from many of the same skill-based shortcomings as Stillman, and neither should probably be spending much time in a team’s top-six.
But both defenders are, at the very least, worthy of having an equal place in the Canucks’ rotation as Stillman, and the longer they go without being given their fair shake, the harder it is to ignore that the only real reason Stillman hasn’t been sat so far is the cost that the Canucks paid to pick him up in the first place.
That second round pick was costly, no doubt. And given Dickinson’s early run of success in Chicago, the deal already looks a little unbalanced. Should Dickinson continue to show well and Stillman continue to flame out, it looks like an awful trade, to be sure.
But the cost is sunk. There’s nothing that can be done about it now. Continuing to trot Stillman out there to bleed goals against isn’t helping anyone.
Rathbone needs to play. Burroughs deserves to. And Stillman has done as much as anyone — and more than most — to earn a healthy scratch by this point.
The Canucks could rectify this as soon as Tuesday, and the sooner the better, because Travis Dermott is set to return from injury in the days or weeks to come, and that’s yet another body that is going to need to be fit into the mix.
If Dermott returns and takes Stillman’s spot in the lineup before Rathbone and/or Burroughs have escaped the pressbox, that’s going to be a frustrating outcome for many in the fanbase.
Especially when there’s no good reason for it, and at least one bad one.
Editorials
Recent articles from Stephan Roget