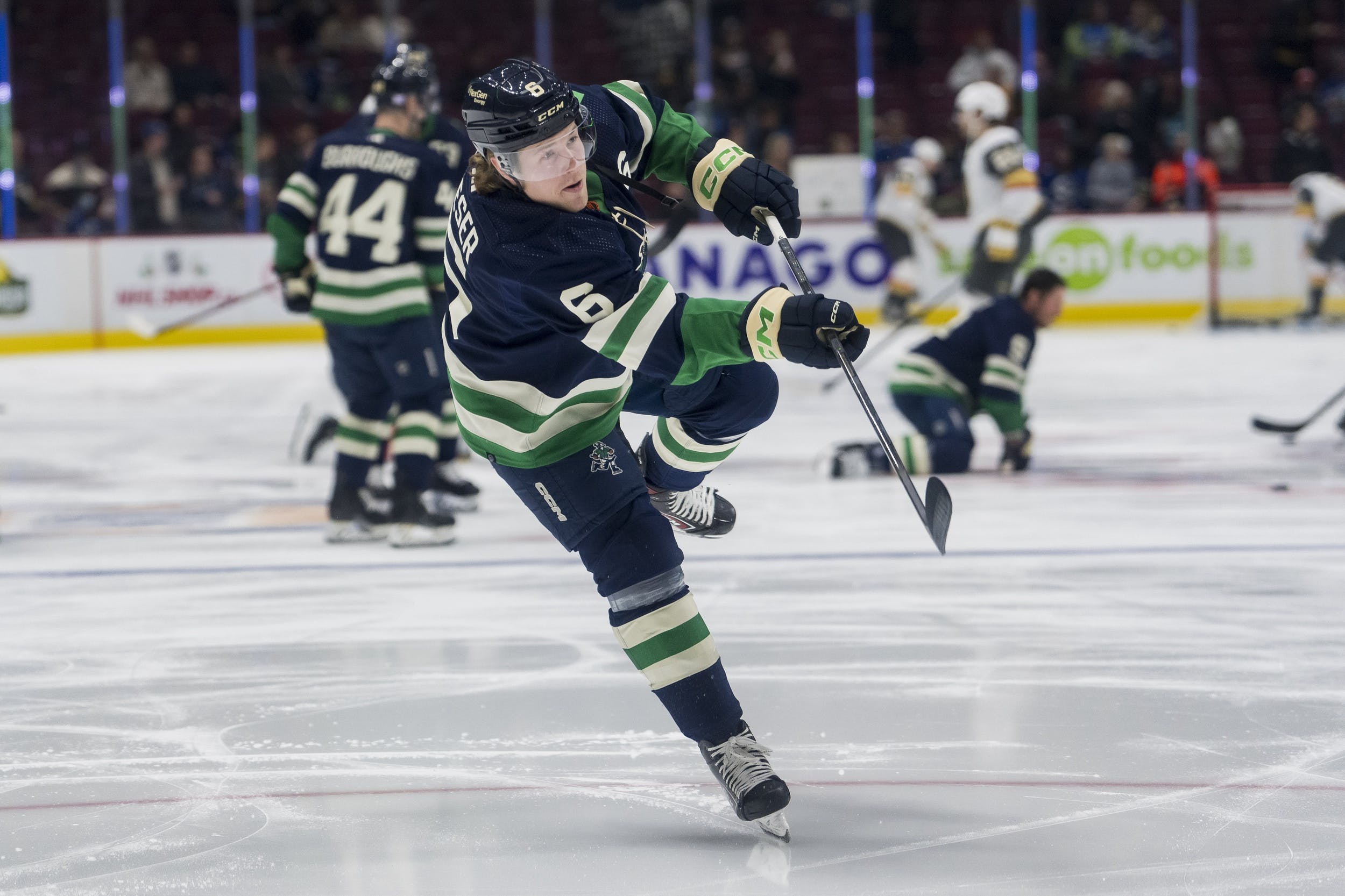 By Stephan Roget
1 month ago
Folks, the writing is on the wall, and it says “BROCK BOESER, FREE TO A GOOD HOME.”
It’s been quite a week for Boeser-related headlines. There was the already-infamous would-be healthy scratch, word that Boeser’s agent had been given permission to speak to other teams, and then a full report clarifying that Boeser never actually requested a trade. That instead, this was a mutual agreement between the Canucks and Boeser’s camp to do what’s best for both the club and player’s future.
Throw in a couple of strong performances, and it’s really been a Boeser-heavy couple of days.
The news keeps on coming, too, and some of it is contradictory.
There are those in the mediasphere who feel that Boeser won’t return much in a trade that now seems all but inevitable…
…and yet agent Ben Hankinson is reportedly chatting to all sorts of teams about his client, which would lead one to believe that there is indeed a market out there, and markets generally mean a decent return.
It’s all very confusing, and Canucks history has shown that we can expect a few more twists and turns to occur before it all gets sorted out.
In the meantime, however, we can still definitely speculate about which other teams might be interested in Boeser’s services, and that’s what we’re going to do today.

On the one hand, the Anaheim Ducks are the worst team in hockey this season. On the other hand, they’re already further along their rebuild than most might expect, with several quality pieces in place and already contributing to the NHL roster.
With that in mind, supplementing that young talent should be a priority for the Ducks in the coming years, and Boeser would certainly be one way to do it. We can imagine him riding shotgun with Trevor Zegras or Mason McTavish for years to come. With more than $21 million in current cap space, the Ducks can afford Boeser both now and throughout the remainder of his contract.

The Sabres were hoping to turn things around this season, but the standings say otherwise. Like the Ducks, the Sabres have a bunch of uber-talented players already locked into place, and are now just concerned with building around them. As far as complementary pieces go, Boeser is quality. With Victor Olofsson probably on the way out via free agency, Boeser slides right into the Buffalo top-six and onto their power play with little issue, and there are no real concerns about the Sabres being able to afford him.
The only question that remains is style of play.

Look, we’re all sick of the Flames stealing former Canucks, and having Boeser play within the division for the rest of his career would be painful. That being said, the Flames have specifically been on the lookout for another scoring right winger all season long, and Boeser might just be the best on the market.
Boeser would be a luxury for the Flames at this point, and they’re probably unlikely to pay the intradivisional tax for a luxury addition. But, if they really feel he can put them firmly back into the playoff picture, maybe it’s worth their while. Cap considerations would also be tricky, and probably require the return of Milan Lucic to Vancouver somewhere in the exchange.

Under the watchful eye of GM Steve Yzerman, the Detroit Red Wings are finally turning a corner after years of futility. But if there’s one thing that their rebuild has left the Wings a bit short on, it’s scoring talent. Boeser comes in to supplement a young core while they’re still all on cheap contracts, and he brings with him some of the high character that Yzerman traditionally values. Plus, doesn’t Boeser just seem like a Detroit kind of player?
With Tyler Bertuzzi a likely departure this offseason, the acquisition of Boeser becomes even more of a draw.

Another intradivisional rival that is ultimately unlikely to land Boeser due to circumstances, but the fit is there. The Oilers, McDavid and Draisaitl aside, have a rather uninspiring top-six, and that’s doubly true with Evander Kane on the sidelines. The Oilers simply cannot afford to waste too many more prime years of their dynamic duo, so if they feel that Boeser is the scoring touch they need on the wing, they could be enticed to pay a heavy price for his services.
The cap would be complicated, and the Canucks could probably expect to take both Tyson Barrie and Jesse Puljujarvi back in any deal, along with some extra goodies. But is that really worth watching Boeser thrive in Alberta for years to come?

There has been some smoke between the Kings and the Canucks for some time, and it’s not hard to see why. Vancouver is desperate for RHD, and Los Angeles has the deepest crop of them in the entire NHL. The Kings also have plenty of young depth up front, but it’s been a little slower to come along, leaving them impatient and looking for more immediate contributions. Enter: Boeser.
Boeser could fit anywhere in the LA top-nine, really. The Kings have staggered their contracts nicely, but they’d have to do some work to also fit him under their cap, now and in the future. Then there’s the further complication of an in-division trade to consider. Despite the roster fit, this one seems like a long shot.

This is the outcome that most would prefer. Sending Boeser back to his home state has great vibes, and there’s definitely a roster fit to be found there.
But the Wild are also contending with excessively exorbitant buyout penalties for Ryan Suter and Zach Parise that get even worse next season, so they’ll be wary to take on additional long-term cap. If they ditch Matt Dumba, they could wind up with enough cap room, but would a scoring winger then be their priority? It might seem kind of silly for the Wild to deal away Kevin Fiala only to acquire a nearly-as-expensive Boeser a few months later.
Still, it’s a great storyline.

The Devils are unexpectedly at the top of the league, thanks in large part to their powerful center core and their revamped blueline. Their wings, however, still leave a little bit to be desired, and are decidedly lacking in star power.
New Jersey has been attached to names like Timo Meier all year long. If they miss out on those particular sweepstakes, Boeser looks like a nice consolation prize. The Devils would have to do some cap maneuvering, but that’s more doable for them than most, and they’ve certainly got the prospects available to make the value work. Could Boeser go from playing alongside one Hughes to two?

The Islanders and the Canucks have been talking trade since at least the 2022 Entry Draft, and those talks have almost certainly involved one or more forwards headed from Vancouver to Long Island. JT Miller and Conor Garland were the names previously attached to this speculation, but maybe Boeser is the best fit of the bunch.
Mathew Barzal has been looking for a sniping winger to ride shotgun for basically his entire career. Boeser fits the mould of a Lou Lamoriello player to a “t,” and the Islanders have a surprising abundance of cap space to play around with. Don’t be surprised if these rumours reignite in the weeks to come.

There’s always going to be a connection between the Penguins and the Canucks for as long as Jim Rutherford and Patrik Allvin are running the show. The Pens are trying to squeeze another run or two out of the Crosby/Malkin core, and that always has them looking for in-season acquisitions.
If the Penguins simply chose not to re-sign Jason Zucker this offseason, and made someone like Kasperi Kapanen part of a trade, they’d easily have enough room to fit Boeser into the picture. Skating on the wing of Sidney Crosby, we can imagine Boeser putting up considerable goal totals…and by the time his contract is up, the Pittsburgh window will have firmly closed, anyway.
Where do you think Brock Boeser will end up? Let us know if we missed a destination in the comment section.
Editorials
Recent articles from Stephan Roget