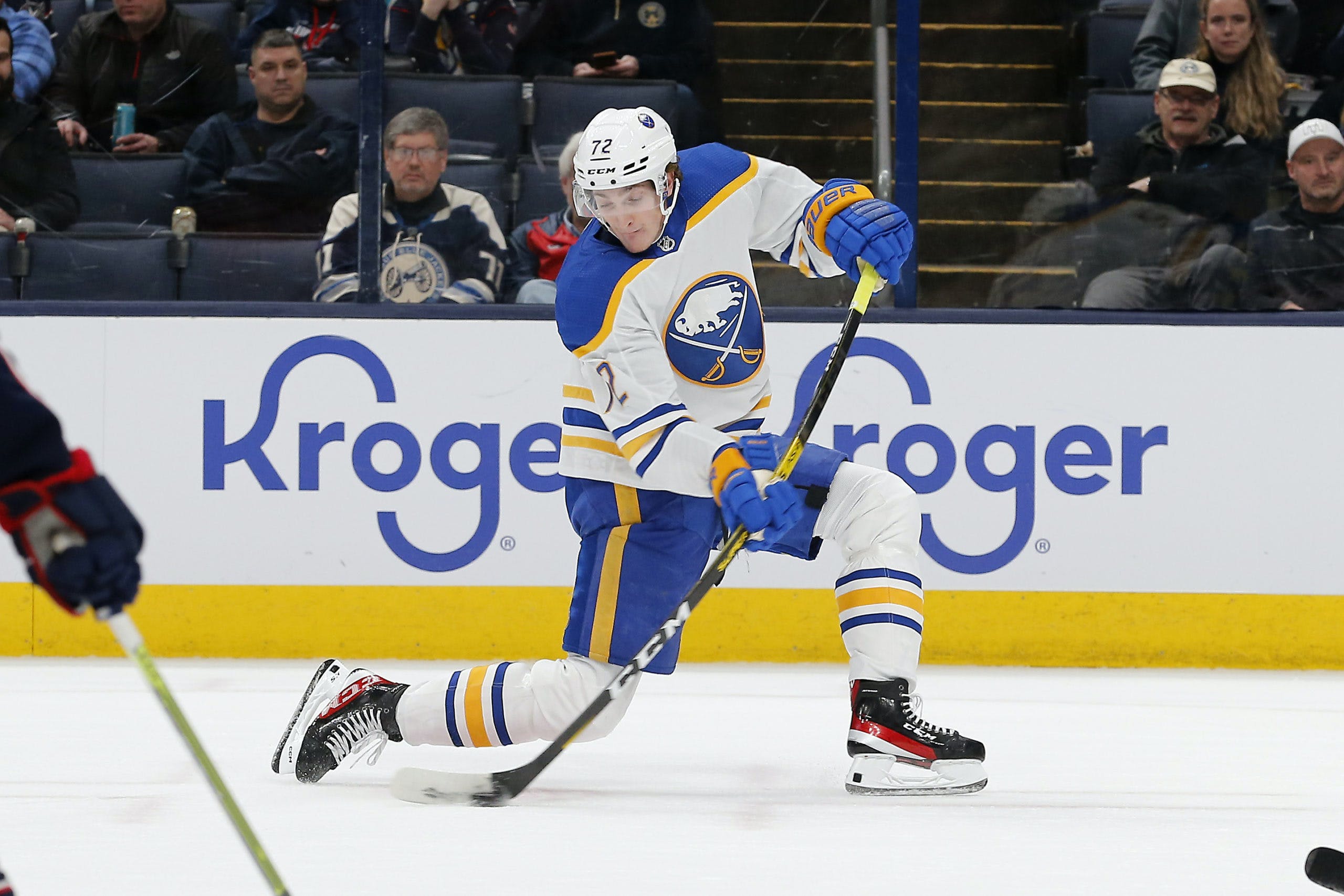 By Noah Strang
1 month ago
Welcome back to Around the League — the column in which we examine news and notes from around the National Hockey League, oftentimes through a Canucks-tinted lens.
There’s been lots of exciting news in the hockey world recently, all the way from the NHL down to the CHL. Let’s get into some of the big headlines.

Tage Thompson put in one of the most impressive individual performances of the NHL season thus far with five goals in the first two periods against the Columbus Blue Jackets on Wednesday night. He scored four goals during an eleven-minute stretch in the first period. His fifth goal in the second period raised his season total to 21.
Thompson’s development over the past few years has been amazing to watch. He’s transformed himself from a gangly and awkward forward to one of the league’s most dangerous offensive players and a bright young star.
The Buffalo Sabres rewarded Thompson with a 7-year extension worth $50 million last offseason. At the time, this was considered to be a risky move by the franchise. While Thompson had shown promise, he had a limited track record and a high shooting percentage. This season, however, he’s making the contract look better by the day and is a key part of an exciting young core in Buffalo.
Thompson was a part of the package that the Sabres received in return for trading Ryan O’Reilly. While he wasn’t considered to be a can’t-miss prospect at the time, he has blown away expectations and is now a Rocket Richard Trophy contender locked up for several years on a team-friendly deal.

Christmas is fast approaching and for hockey fans, that means one thing. The annual IIHF World Juniors tournament kicks off on Boxing Day as Canada faces off against Czechia. Canada will also face Germany, Austria, and Sweden in the round-robin stage.
Team Canada got some good news recently as three great players got the green light from their NHL clubs to participate in the tournament. Shane Wright (Seattle Kraken), Brandt Clarke (Los Angeles Kings), and Dylan Guenther (Arizona Coyotes) will all be wearing the red and white this holiday season.
This gives Team Canada some more experience as well as high-end firepower for their lineup. Wright and Guenther will both be key top-six forwards that receive ample playing time and are relied upon to produce. Clarke will also eat minutes as a top-four defenceman as well as likely quarterback either the first or second power play unit.
Canada is the tournament favourite, with Finland and the United States as the next biggest contenders. As always, the expectation is that the boys from up north bring home a gold medal, as they have done in three of the past five tournaments.
This year’s tournament takes place in Atlantic Canada as Halifax and Moncton are the two host cities. It will be nice for a hockey-crazed part of the country that does not have a professional team to get this opportunity.
Editorials
Recent articles from Noah Strang