Stats, standings, and predictions for a Rathbone-less Abbotsford Canucks home swing against the Calgary Wranglers 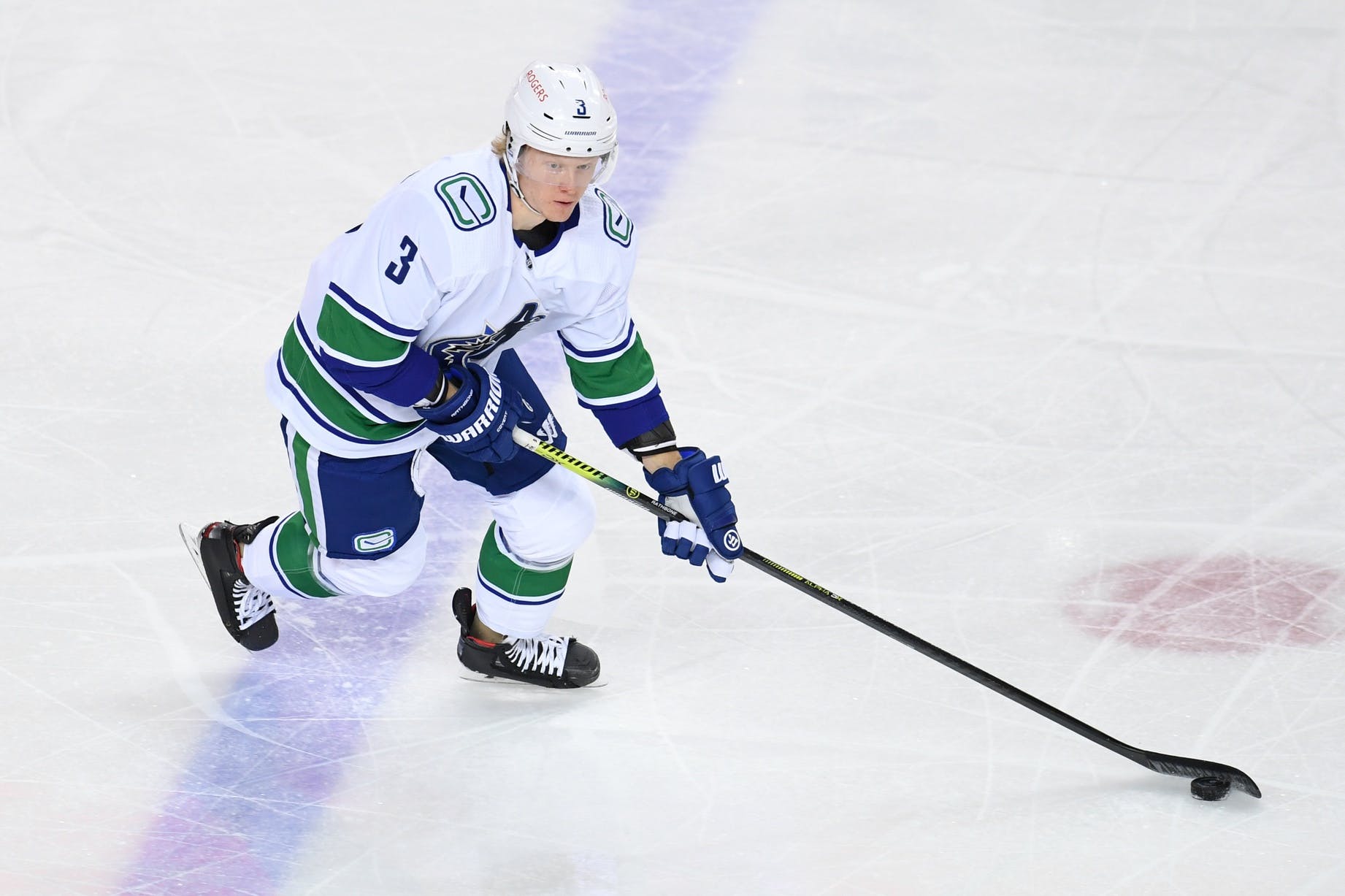 By Cody Severtson
16 days ago
So, last weekend wasn’t great.
For the second time in two years, Jack Rathbone ended up on the receiving end of a brutal collision behind Abbotsford’s goal line, resulting in a stoppage in play and the need to be stretchered off the ice.
Bad luck doesn’t even come close to describing Rathbone’s tenure as a Canuck. After signing with the club in July 2020, Rathbone spent the first month of his pro-career waylaid on the team’s taxi squad before heading for the AHL. After dominating his peers with 9 points — 2 goals and 7 assists — in 8 games played, he returned to Vancouver’s roster to play out the final month of the season. An end-of-season schedule, mind you, that saw the Canucks play several meaningless regular-season games while the Stanley Cup Playoffs were already underway.
In his “sophomore” season, Rathbone opened the season as part of the starting 23. Unfortunately, the Canucks were a tire fire. For the first month of the 2021-22 season, the Vancouver Canucks were 3-5-1 with Rathbone in the lineup.
During a road game against the Bakersfield Condors on February 16th last season, Rathbone ate a crushing hit along the endboards that sidelined him for twenty-five days.
Despite the awkward injury and lengthy time off, Rathbone finished his second AHL season with an above-a-point-per-game production pace.
Now this year. Rathbone starts the season in and out of the NHL lineup, picking up a single assist over 6 games before spending twenty days as a healthy scratch. Mercifully, the organization sends him to Abbotsford, where he hasn’t been given the same opportunities as last season or the previous year.
With Christian Wolanin’s glow-up as the number one of Abbotsford’s d-core. Rathbone has been relegated to the second power play unit with next to no time spent on the penalty kill. The sheltered deployment and lack of prime power play time have significantly cooled his AHL production. In 15 games, Rathbone has managed a single goal and 6 assists, way off his career AHL production rate.
Vancouver’s management group spent most of last offseason pumping Rathbone’s tires, citing the promised NHL time and opportunity available to him at the start of the 2022-23 season. While Rathbone didn’t do much to secure his NHL opportunity, the same is true for most Canucks defencemen who’ve dressed this season. Most have been a disappointment outside of Hughes, Ethan Bear, and Luke Schenn. However, Rathbone was the easy odd man out as the new kid on the block in a highly competitive role. Unfortunately, his late demotion to the Farm resulted in lost opportunities at the AHL level.
Then, Saturday’s head injury against the San Jose Barracuda. Another setback in a season of relentless setbacks. Your heart breaks for the kid.
Hopefully, the injury isn’t major, and Rathbone can return to form.
Rathbone will likely be unavailable to the Abbotsford Canucks during this upcoming five-game homestand. Before we preview the first series, a three-game set against the Calgary Wranglers, let’s see how our predictions went for last weekend’s double-header against the Barracuda.

With the NHL club in shambles, players will be playing to prove they’re worth keeping around beyond this season and for late-season call-up opportunities.
This should be an easy 2-0-0-0 weekend. No question.

Look, we can’t always be right! Sometimes the weird result squeaks in. Following the early intermission brought on by Jack Rathbone’s frightening injury, the Farm rallied with four straight goals to defeat the Barracuda. Unfortunately, in their Sunday rematch, the Farm struggled mightily on special teams, losing 3-2 to San Jose, with all three goals coming via the Barracuda’s power play.

I’m not going to lie to you.
This might be a rough stretch for the Abbotsford home crowd. The Calgary Wranglers have been an incredibly difficult out for the Canucks in every single meeting. Through four games, the Abbotsford Canucks have been outscored 14-9, outshot 109-100 at 5v5, and 147-128 overall. The Farm has only conceded 35 or more shots six times this season, three of which came against the Wranglers.
Currently, the Wranglers are (weirdly) third-best in the league in various categories: total goals, goals scored per game, fewest goals allowed per game, power play percentage, and penalty kill percentage. The only category they’re not third-place in is ‘shots on goal per game,’ which they rank second in the AHL.
The Sunday matchup against the Barracuda hurt the Canucks’ special teams’ stats in a major way. Currently, the Farm holds the sixth-best power play in the AHL and the fourth-worst penalty kill. Fortunately, they still have the second-lowest rate of conceded shots in the AHL while generating the 11th-most shots per game! So, despite the brutal PK, there are some quality positives to the Farm’s two-way play!
Working in the Canucks favour is their stellar home record.

Though Calgary enters this three-game homestand on a two-game losing streak, their top-tier away record and elite special teams will once again prove difficult for the home team.
Should Abbotsford perform at its peak, we predict the Canucks will draw at least three points from three games. The Abbotsford Canucks seem to find another gear at home, and even without Rathbone in the lineup, we expect that trend to continue against Calgary.
That being said, three straight losses would not be surprising. Calgary is very good.
Editorials
Recent articles from Cody Severtson