Should Thatcher Demko be in talks already as one of the best Canucks goaltenders ever? 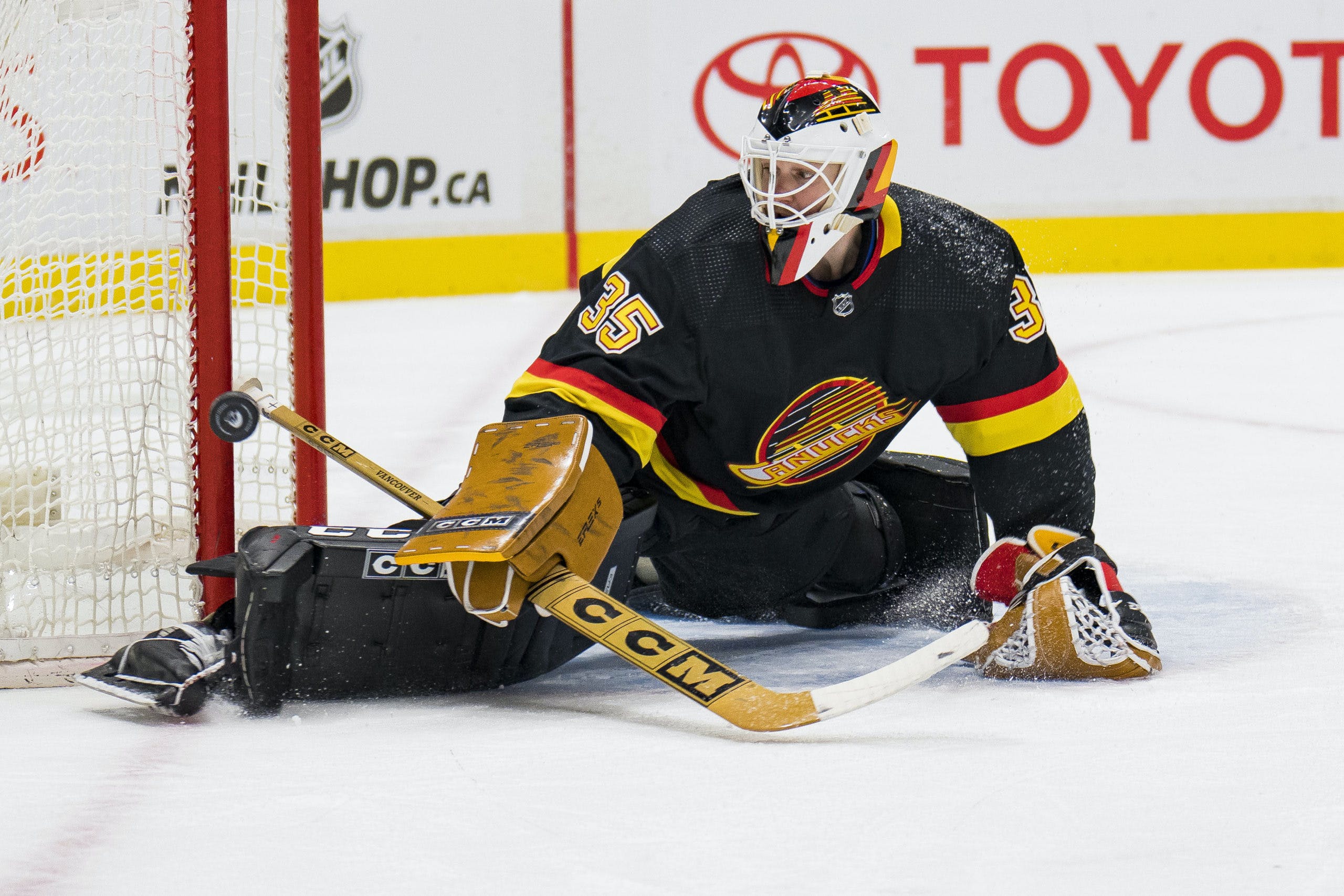 By Isabella Urbani
8 months ago
The Vancouver Canucks drafted Thatcher Demko with the 36th overall pick in the 2014 NHL Entry Draft. It’s a rare prestige for a goaltender to be that highly touted during the initial first rounds of an NHL draft.
The California native was coming off of an impressive freshman year with Hockey East’s Boston College (28-8-4), which ranked third nationwide.
Demko earned the right to man the crease over juniors Brad Barone and Brian Billet, starting in 24 games (16-5-3) in his debut collegiate season, with a 2.24 goals-against average and a .919 save percentage. That same year, he represented Team USA at the World Juniors as the third-string goalie.
Among his many accolades in freshman year — which was just the tip of the iceberg — was Boston College’s fifth-straight Beanpot. Demko earned the Eberly Award for best save percentage (.966) — the second-best in history — before being named the annual Hockey East Goaltending Champion (for lowest goals against in conference games) with 1.35.
As history would have it, Demko would go on a consistent campaign of claiming new records and picking up a plethora of accolades, among them the Mike Richter Award (2016), and a nomination for the Hobey Baker Award — which has only ever been won by two goaltenders.

Rising in the ranks fast

It would only take three collegiate seasons for Demko to get the call to the Canucks former farm team, the Utica Comets. As a 21-year-old, he appeared in 45 games, recording a 2.68 goals-against average with a .907 save percentage.
In his second full season in the AHL Demko earned himself a spot on the All-Star team. He made his Canucks debut two months later in a 26 save winning performance over the Columbus Blue Jackets, 5-4 in overtime.
His time in Utica would come to an end the following season after being called up full-time to the big club after suiting up for just 16 games. Demko played a supporting role for goaltender Jacob Markstrom for 2 years, often seeing action during back-to-backs, before solidifying himself as the number one goaltender for the past two seasons.
In 112 career games, Demko has registered a 2.84 goals-against average alongside a .913 save percentage. Fans first got a glimpse of Demko’s brilliance in the infamous bubble series against the Vegas Golden Knights, in which the team clawed themselves out of a 3-1 hole. His less than one goal a game average stoned Vegas in game six and equally frustrated them in game five.
Since then, Demko has continued to elevate his gameplay and has been the MVP of the season thus far. With this in mind, one can only wonder if Demko is already amongst the top goaltenders to put on a Canucks jersey?
I say yes. At the very least, he merits the discussion.
Is he at the very top? No.
But is it likely that he will finish there? If he continues at this pace, quite likely.

The great debate (Markstrom vs Demko)

Looking strictly at the winning column, the likes of Roberto Luongo, Kirk McLean, Richard Brodeur, Dan Cloutier, and Jacob Markstrom make up the top five. Demko sits ninth with 55 wins in 112 appearances.
“It’s something I’m aware of for sure,” Demko said last night when asked about the organization’s rich history of goaltending. “I think the position has always been well tended to throughout the organization’s history for the most part. Obviously when you’re a goalie in general you have a lot of responsibility, but you know, when you have guys before you who are legends of the game, I think it’s even more important to take that weight on every day and make sure that you’re upholding them.”
When deciphering where Demko slots into the discussion, or if he even does, we have to take into account his team impact with the limited games played.
We will start with Demko’s closest comparison in Markstrom. Deciding between these two goaltenders can go either way. Other than Luongo, it would be a little too tricky without the same advanced statistic to compare Demko to the remaining goalies. Plus, I wouldn’t quite put him in the same category, even though I am still painfully reminded of Nicklas Lidstrom’s centre-ice goal on Cloutier.
Markstrom really found his footing with the Canucks near the end of his time with the team. Comparatively, the two-sport almost identical numbers: both are NHL All-Stars and Vezina nominees in their own right.
Demko does have a definitive edge in goals saved above expected with seven to Markstrom’s one. Not to be undermined is Markstrom’s incomprehensible save against the Blues when the puck redirected off an official. But I have always been one to say that for each goal that Markstrom stops behind your belief, a soft one may follow.
Markstrom can also be a little unpredictable in net. More often than not, he will leave his net for a 50/50 puck or go for a flying poke check. On the other hand, he brings a certain confidence and assertiveness to the net, controlling the flow of the game and the puck to his defenceman.
This aspect of the game is yet to fully develop in Demko, which might be even more valuable with the defensive core surrounding him.
The beauty of Demko’s play lies in how easy and composed he looks among a chaotic and screened front. Demko is one of the most technically sound goalies I have ever seen. His 6’4 frame certainly does not impede his lateral movements.
One of his greatest strengths is his puck tracking ability with bodies crashing the net on second rebound attempts his defenceman fail to clear.  Not to mention his desperado scorpion saves. His compete level has made him a quick fan favourite when many goaltenders would testify to receiving a lack of appreciation for their craft. Equally as competitive is Markstrom — never one to shy away from admitting to wanting to play every game, although it often creates nagging injuries.
When it comes to who is a better goalie, fans can pick their poison. I would give the edge to Demko. As a Canucks fan, I applaud Markstrom’s eighth shoutout on the season from the sideline, with little regret about the decision to let him walk. Demko needed the front seat to rise to the expectations, and he has done just that.
Whether or not his name is brought up in discussions as a franchise goalie at this point in time, fans have to be happy with the talent that has panned out in the net for Vancouver.
Content
Nation Takes
Recent articles from Isabella Urbani