Should the Canucks make a push to trade for Oilers forward Jesse Puljujärvi? By Lachlan Irvine
17 days ago
After the Edmonton Oilers made Jesse Puljujärvi a healthy scratch today ahead of their matchup with the Seattle Kraken, the trade sharks could smell blood in the water.
The 24-year-old Puljujärvi has had a tough season offensively in Edmonton, managing just 10 points in 45 games. And as he continues to play out a one-year deal worth $3 million, there’s more and more noise that the Oilers are looking to offload his contract ahead of the NHL trade deadline.
Meanwhile, the Canucks are in the early stages of yet another “re-tool” and are willing to move just about any player on the roster that isn’t named Elias Pettersson. Should they be in the market for Puljujärvi and if so, how high a price should they be willing to go to?
First, the downside. The Canucks haven’t exactly had a great track record with reclamation projects in recent history.
Matthew Highmore, Derrick Pouliot, Markus Granlund, and Emerson Etem are just a few of the underachieving players the Canucks have brought on board over the last decade, with the sole hope of reinvigorating them into an NHL mainstay.
Fast forward to now, and almost all of them are entirely out of the league (shoutout to Tyler Motte).
But there’s a key difference here: Jesse Puljujärvi isn’t the same kind of reclamation project.
As the former fourth overall pick in 2016, Puljujärvi has had lofty expectations since his first day in the league. After struggling to stay in the NHL during his first three seasons and returning home to Finland for a year, Puljujärvi finally stuck on his return to Edmonton in the 2021 season.
Last year Puljujärvi notched a career-high 36 points in 65 games but has constantly drawn the ire of, ahem, certain hockey people for his struggles to score alongside the likes of Connor McDavid and Leon Draisaitl, all the while ignoring his strong advanced stats on the defensive side of the puck.
According to Evolving Hockey, Puljujärvi has been in the 98th percentile of NHL forwards defensively over the last three seasons. Shrink it down to just this year’s sample size, and that number drops ever so slightly to the 94th percentile. 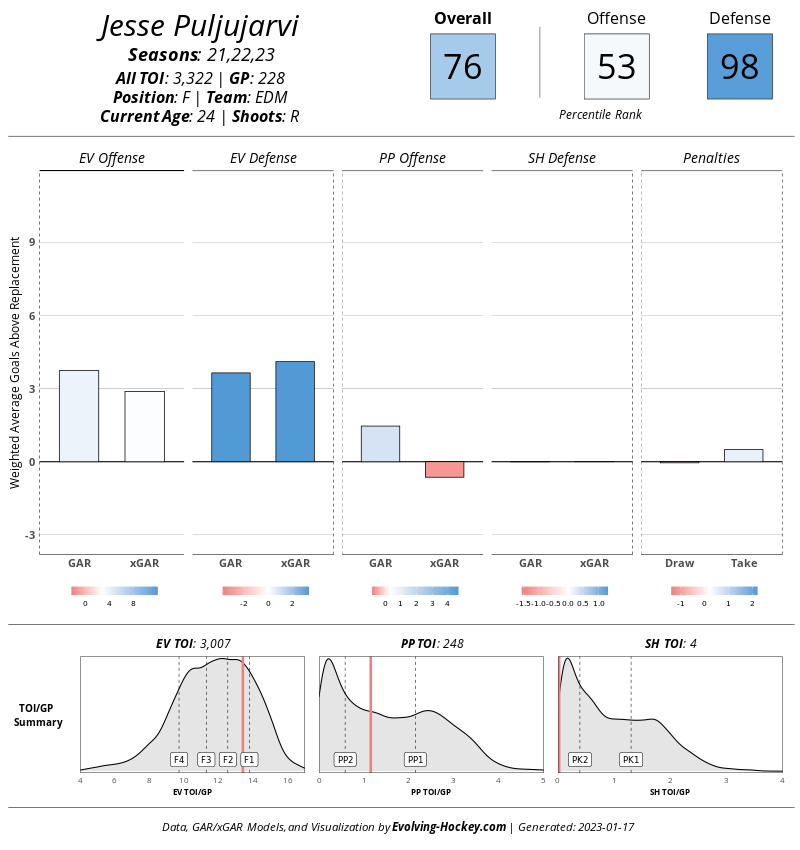 Needless to say, the Canucks are in much more desperate need of defensively-minded players, especially on offence. And unlike an Oilers team with all-in Stanley Cup aspirations, Vancouver would be able to provide the patience and opportunity for a young skater like Puljujärvi to re-capture his scoring touch that Edmonton can’t.
And with Puljujärvi heading to another round of restricted free agency this summer, the Canucks could likely get him at a long-term price close to the $3 million AAV he’s currently attached to.
So what kind of offer could the Canucks make?
The biggest stumbling block to any Canucks-Oilers trade is that both teams are extremely capped out at the moment. And with Edmonton looking to improve on their trip to the Western Conference Final last year, any sale will likely have to be a “dollar in, dollar out” deal, or at least close to it.
One interesting carrot to dangle might be Conor Garland. The 26-year-old winger has also struggled to find his scoring game this year with the Canucks, but he plays a hardnosed style game that Edmonton has been craving for a while.
Garland also comes with a cap hit of nearly $2 million more per season than Puljujärvi, but the three seasons of control beyond this one might be a plus for Oilers GM Ken Holland. If not, salary retention could be doable, at least at a relatively small percentage to balance out the money.
Brock Boeser could also be an interesting trade chip here, but his much higher $6.65 million cap hit might be too rich for the Oilers’ blood.
Draft picks might be on the table as well, but with a reclamation project, it’d be important for the Canucks not to pay for what the former first rounder was supposed to become. Anything above a third-round pick would likely be an overpayment in the current day, so we’d hazard against playing a second-rounder card unless there’s a sweetener coming with the Oilers winger.
But regardless of retools or rebuilds, Jesse Puljujärvi is the right type of player for the Canucks to put themselves in the conversation for. But they have to do so with the willingness to let Puljujärvi take his time rediscovering his game, and not rush him to become the star he was once hyped as.
Editorials
Recent articles from Lachlan Irvine