Sham Sharron returns: Can an intern who doesn’t watch hockey out-draft the Canucks? 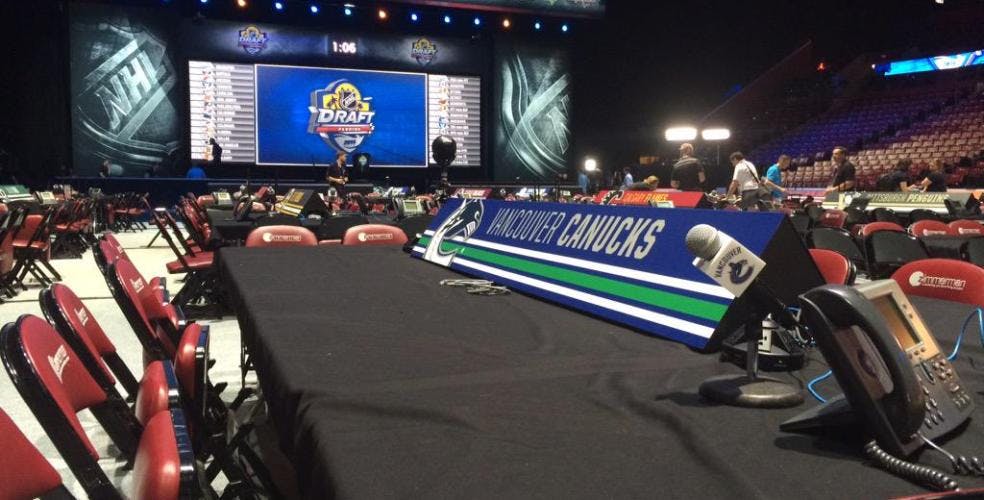 By Inglourious Capital
1 year ago
The Jim Benning era has seen the Canucks unearth more high-end talent through the draft than ever before. Proponents claim that this justifies some of Benning’s pro-scouting and free agency related blunders, while dissenters claim that this outperformance is attributable to having relatively high selections every year.
To try and settle the debate, I put Jim Benning’s Canucks draft record to the ultimate test: the Sham Sharron test.
For those who don’t know, back in 2014 Rhys Jessop created Sham Sharron to test Ron Delorme’s scouting department against the laziest intern possible. Rhys was inspired by Pension Pan Puppets’ potato GM series, in which they determined that yes, a potato could outmanage Dave Nonis.
As an intern, Sham recognizes that he doesn’t possess the talent-evaluation abilities of the average hockey man. To compensate, Sham adheres to a strict process. Every year on the night before the draft, he compiles a list of all first time draft-eligible CHL forwards sorted by points per game. When it’s his turn up at the podium, he just looks at the next available player on the list and makes a selection. He doesn’t watch a second of hockey to inform his selections, and he’s certainly never played the game. Here’s the top of Sham’s 2015 list:

Sham handedly beat Ron Delorme back in 2014, but he’ll have to overcome a lot to beat Benning.
Can he do it? Let’s find out.

2014 was a tough draft for the Canucks. While they grabbed Thatcher Demko, Jake Virtanen at six goes down as a huge missed opportunity. With Sham on the scene, things could be different……and they are: with the Canucks’ first selection, Sham goes with Nikolaj Ehlers. A great forward piece that will play a massive role in the next core.
In the second round, Sham selects the undersized Brayden Point. Sham has never played the game, so he doesn’t know that Point is too small to have a chance of making it in the NHL.
Sham closes out the draft grabbing Conor Garland. Garland somehow went unselected in real life, but Sham doesn’t know about whatever problems scouts saw.
The Canucks’ rebuild is in full swing, and Sham has shrewdly built the foundations of an elite forward core. They have their number one center of the future and some great pieces on the wing. Sham may have just potato’d his way to a top line in his first ever draft:

Where does Jake fit on Sham’s list? Well, so long as Conor Garland was available, Sham wouldn’t touch him:

Besides Virtanen (which, at 6th overall, is a massive “besides”), the Canucks’ 2014 draft wasn’t bad, it was just nowhere near as good as Sham’s. For the Canucks’ list, I’ve only included draft-eligible season stats for those who played in the CHL:

After an unbelievable performance at the 2014 NHL draft, Sham’s up to bat once more. Scouts are wondering how an intern they’ve never seen attend a game put together the 2014 record he did.
The 2015 draft is a relatively forgettable one for Sham. He leaves with only one current NHLer this time, Anthony Beauvillier. It’s a defensible pick, but his draft doesn’t age well:

In comparison, the Canucks grabbed Boeser, Gaudette….and of course, the legendary Guillaume Brisebois:

This one definitely goes to the Canucks. Looking through Sham’s list does make me wonder though: what were New Jersey and Florida thinking in the first round???? 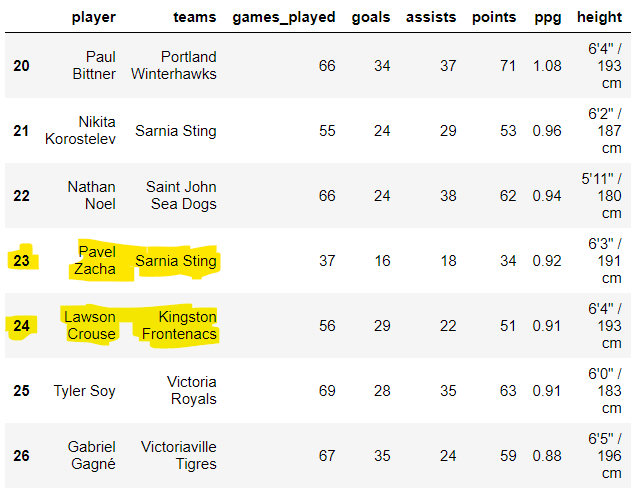 Height took a more important place in the game. They made some mistakes….and thank God Sham’s back.

Two drafts, one an absolute heist, the other a mild flop. Sham is feeling the heat, and he’s out to prove his 2014 draft was no fluke. When Columbus goes off the board to take Pierre Luc-Dubois, Sham walks up to the podium and selects Matthew Tkachuk. An absolute layup selection, one that nobody would ever miss, right?
But Sham is really hurt when he doesn’t have a pick to grab the player he ranks just behind Tkachuk: Alex Debrincat. It’s a shame: the Canucks may have sported a new look featuring Matthew Tkachuk, Brayden Point, and Alex Debrincat on the first line and Nikolaj Ehlers, Bo Horvat, and Conor Garland on the second line. Man, why am I doing this to myself?
Anyways, following the layup Tkachuk selection, Sham matches the rest of the uneventful Canucks draft with an uneventful performance of his own:

The Canucks’ performance in the draft doesn’t need to be talked about:

2017 is tough on Sham, as he is literally unaware Cale Makar and Elias Pettersson even exist. He still does well in the first round though, going off the board at five to take Kailer Yamamoto. If he could have weighted goals a little more heavily, he would have possibly selected Nick Suzuki. Unfortunately, Sham can’t do math.
Sham also grabs a Canucks pick in Jonah Gadjovic. Assuming nobody in Sham’s alternate reality took Kole Lind between the Gadjovic and Lind selections, Lind would have been Sham’s pick:

Yamamoto is a great player, and it helps Sham keep pace in a draft he had no chance of winning. Obviously, Pettersson is okay, so it’s an easy win for the Canucks here.

Now we’re moving into the “really hard to judge territory”. Unlike everyone else in 2018, Sham doesn’t draft for position. Maybe he should have, because then he might have picked Quinn Hughes (again, if he knew Hughes existed). In either case, 2018 sees a tough first round for Sham, but he managed to grab an NHLer later in Philipp Kurasev. I also like the Akil Thomas pick:

Here’s the Canucks performance, which given the Hughes selection alone, undoubtedly beats Sham this time around:

Unable to pick Podkolzin, Sham grabs Arthur Kaliyev in the first round. While Kaliyev is a supremely skilled player, some scouts wonder about his attitude. Sham doesn’t care, and he’s more than excited because he had Kaliyev ranked first in the entire draft:

Sham’s big miss is Höglander. I wouldn’t sleep on Kaliyev though, who’s produced pretty well in the AHL and has a chance of developing into a good NHLer. Canuck picks:

Here are the final lists of NHLers for Sham and the Canucks. Canucks point per game totals exclude goaltender games played:

The grading was tough. Sham demolished the Canucks from 2014-2016, while the Canucks had their way with Sham from 2017-2018. Both ended up with elite talent, with the Canucks’ spread across a variety of positions. With that said, it’s up for debate, and many will disagree, but I’m going to give the win to Sham by a hair. I ultimately believe that if you sold all of Sham’s assets on the trade market, you’d likely get more value than if you sold all the Canucks’ assets. Moreover, a Sham-inspired methodology undoubtedly gets you Pettersson and Hughes. I’d like to point to this Pension Plan Puppets article that had Pettersson ranked at the top of the draft through similar means.
So congratulations to Sham for outperforming the Canucks, their scouting-guru GM, and their $2 million budget…..again. Even if you disagree with my conclusion, it’s alarming that it’s this close. The point of Sham is that it’s a baseline a GM better outperform significantly, and the Canucks haven’t done that through Benning’s tenure.
With that said, I learned quite a bit in my Sham project. First, the project illustrated how significantly it pays to ignore consensus opinion. Sham had Kailer Yamamoto and Nick Suzuki ranked as the top two players in 2017. Of the CHL players available in that draft, Sham likely got it right – the problem is that either would have been considered a reach by consensus in the top ten.
Sham also had tons of utility as an are you sure guy, saving regrettable picks like Jake Virtanen, Lawson Crouse, Connor Bleakly, and Pavel Zacha. Scouts often get caught up in assessing variables that have little/no impact on the end result. Reasoning from first principals, asking questions like: “does this variable predict player X’s ability to generate and suppress goals at the NHL level?” should be a constant in scouting circles.
I also started thinking about drafting within a circle of competence. There are many players who’s future value can be assessed only through qualitative factors – it’s just a difficult and unnecessary game. Teams should take the easier road while it’s still available: grab the players the data says are no brainers and don’t overthink. It won’t work all the time – sometimes teams will miss players with good qualitative traits, but at the very least they’ll outperform Sham.
Uncategorized
Recent articles from Inglourious Capital