Scenes from morning skate: Quinn Hughes remains out with illness, Rathbone will not play 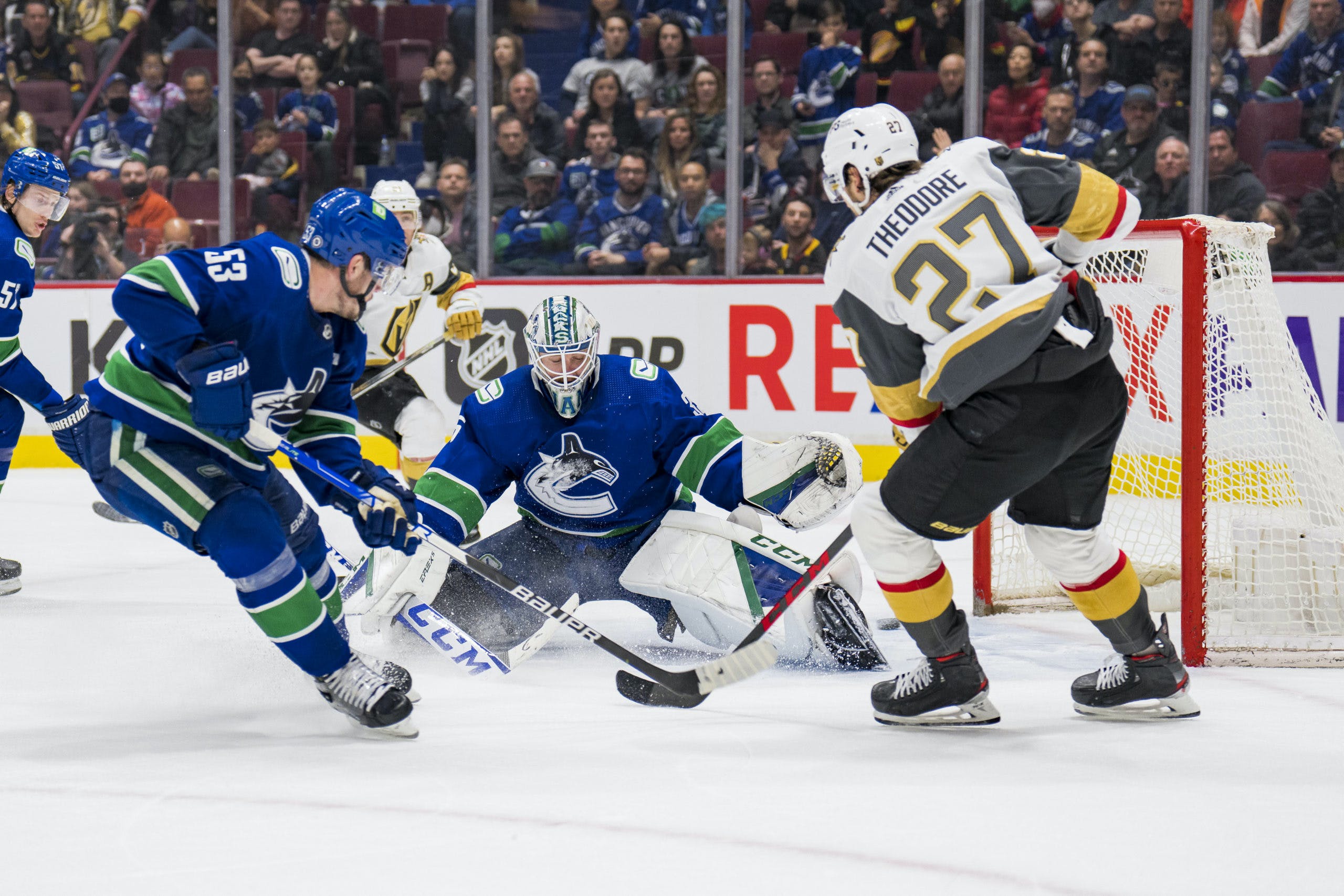 By David Quadrelli
7 months ago
The Vancouver Canucks are in Las Vegas for the first leg of back-to-back games on the road.
Tonight, they will face off against the Golden Knights, and tomorrow, the Arizona Coyotes.
Here’s what we can tell you about tonight’s game against Vegas.

As per Harman Dayal of The Athletic, the D pairs weren’t made clear at morning skate, but we were given a few hints from media availability.
Based on all this information, our guess is the defence pairings will look something like this tonight:
OEL-Schenn
Dermott-Myers
Hunt-Burroughs
Thatcher Demko starts in goal, with Jaroslav Halak getting the start tomorrow night in Arizona.

Although Rathbone isn’t in the lineup tonight, Bruce Boudreau finally got the chance to see him in person, and had this to say about him.
“He looks like a really good skater,” said Boudreau. “He looks like a really good prospect. He’s bigger than I thought he was, so I mean, I’m anxious to see him play. I just thought that coming in here with no practice with the team, it would be a little bit difficult to activate him right now.”
Additionally, Boudreau talked about Kyle Burroughs making his return to the lineup.
“It’s been a while, but I mean, before he went out in the Anaheim game, he was really playing well for us,” said Boudreau. “I think he deserves a chance to play again. He was playing well and he had earned that spot. He did his best to rehab to come back early and did anything he could to want to come back early, so here’s his chance. I think he’s deserved it.”
Brad Richardson said he got hit with the stomach bug while out at dinner, but doesn’t think it’s related to the recent norovirus cases linked to B.C. oysters.
“Just kind of a rough couple of days,” said Richardson when asked about his illness. “Stomach is still not quite where I’d like it, but you know, it’s getting better. Obviously not ideal timing, I mean it never is, but especially when you’re hanging on for your lives. We gotta suck it up and find a way.”
The Canucks and Golden Knights will face off from T-Mobile Arena in Nevada tonight, and puck drop is at 7 PM.
Uncategorized
Recent articles from David Quadrelli