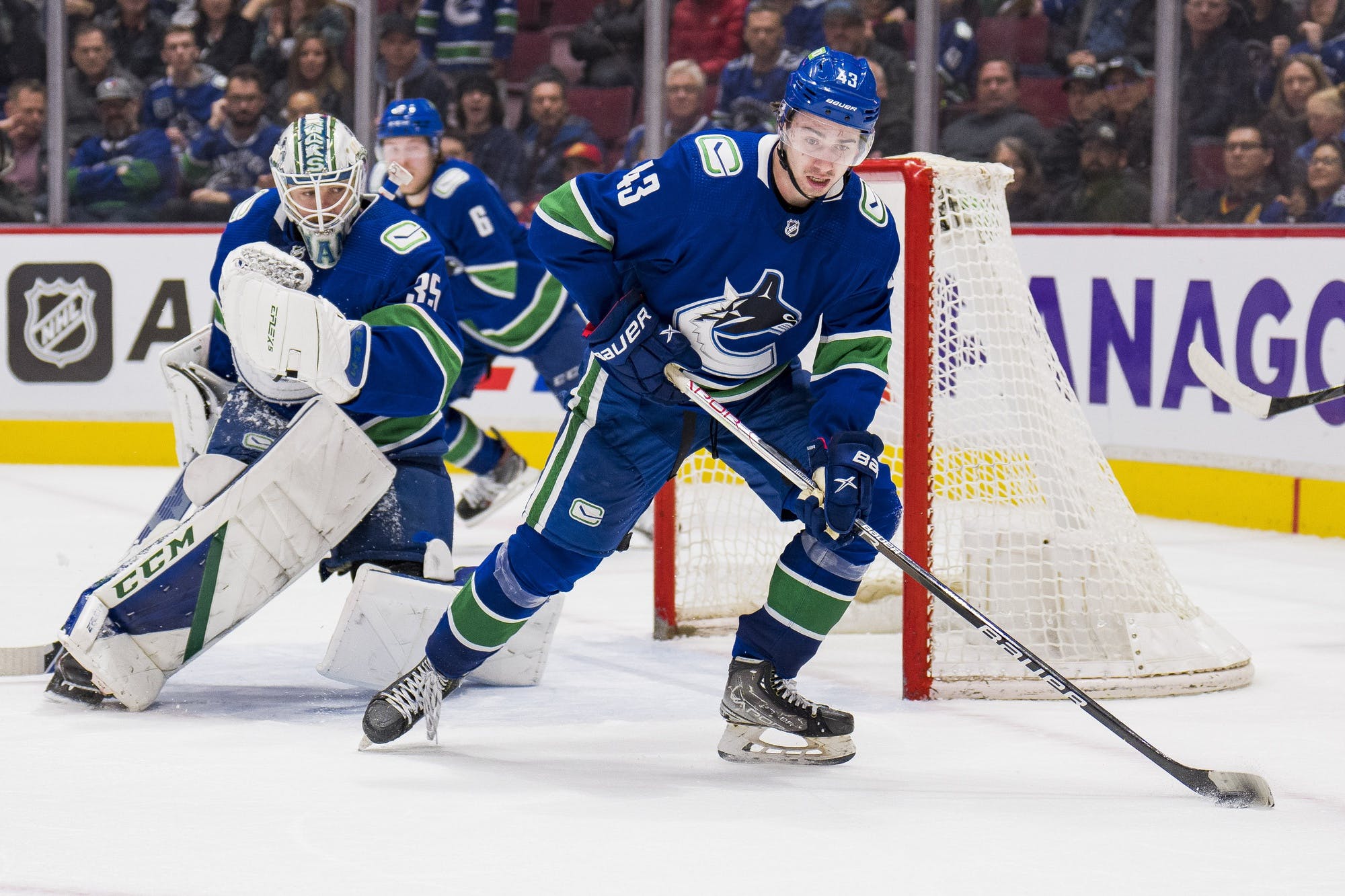 By David Quadrelli
1 month ago
Welcome to scenes from morning skate, brought to you by NHL Lines site Betway!
Fresh off their first two wins of the season, the second of which came in commanding fashion over the Pittsburgh Penguins on Friday night, the Vancouver Canucks are back in action tonight and will play host to the New Jersey Devils.
It’s the fifth NHL matchup between Quinn and Jack Hughes. Through four games against each other so far, Jack’s Devils are 3-1 against Quinn’s Canucks.

The Canucks held an optional morning skate today, with 18 skaters in attendance. Here are the team’s forward line rushes from yesterday:
For the second day in a row, Brock Boeser took part in a full skate with his team. That being said, it doesn’t appear as though he’ll return to the lineup tonight, as he stayed out late after practice alongside Jack Rathbone and Kyle Burroughs for some extra work.
That’s typically a good indicator of who the evening’s healthy scratches will be. So with that, let’s get to the defence pairings we expect to see tonight:
Hughes-Schenn
OEL-Myers
Stillman-Bear
It’s important to note that head coach Bruce Boudreau called Riley Stillman, Quinn Hughes, and Brock Boeser all game-time decisions, but based on what Hughes said in his media availability, it sure sounds like we’ll see him tonight.
Scratching both Jack Rathbone and Kyle Burroughs after back-to-back wins would certainly be a choice. Taking out Burroughs in place of the newly-acquired Bear, who has legitimate top four upside, makes sense. But continuing to deny Rathbone the chance to get any sort of rhythm going at the NHL level with even just the smallest bit of runway in favour of playing Riley Stillman? That one would be a bit of a headscratcher.
The Devils are a fast team and Rathbone’s speed and ability to defend the rush seems like the type of defenceman you’d want on your third pairing. We’ll see what happens tonight.
Thatcher Demko was the first goalie off the ice. He’ll get the start tonight against the Devils.

Speaking of Demko… we got to see his new mask to go with the Canucks’ brand-new Reverse Retro jerseys today:

Quinn Hughes‘ return comes as a welcome sight for Canucks fans, and the Canucks’ top blueliner is excited to be back in time for the matchup against his brother, who he tipped his cap to today.
“I think he’s been really good,” Quinn said of Jack. “I think the first couple of games I watched, he had no points and they were losing, but I thought he had five or six chances a game and he was one of the best players on the ice, if not the best in the last couple. He’s been doing well, and he’s been getting on the scoresheet… they’re six of their last seven, and they’re really hot right now. It’s gonna be a good game.”
Jack Studnicka talked about the opportunity at hand for him as he too gets set to make his Canucks debut tonight after the club traded Michael DiPietro and Jonathan Myrenberg for him last week.
“I’m excited,” said Studnicka. “Obviously been here a couple of days so it was nice to get some practice in… I can’t wait to put the jersey on and play for the win tonight.”
Puck drop between the Devils and Canucks is at 7 PM Pacific tonight as the Canucks debut their new Reverse Retro jersey.
Editorials
News
Recent articles from David Quadrelli