Scenes from morning skate: Demko makes preseason debut as Karlsson gets a big opportunity vs. Seattle 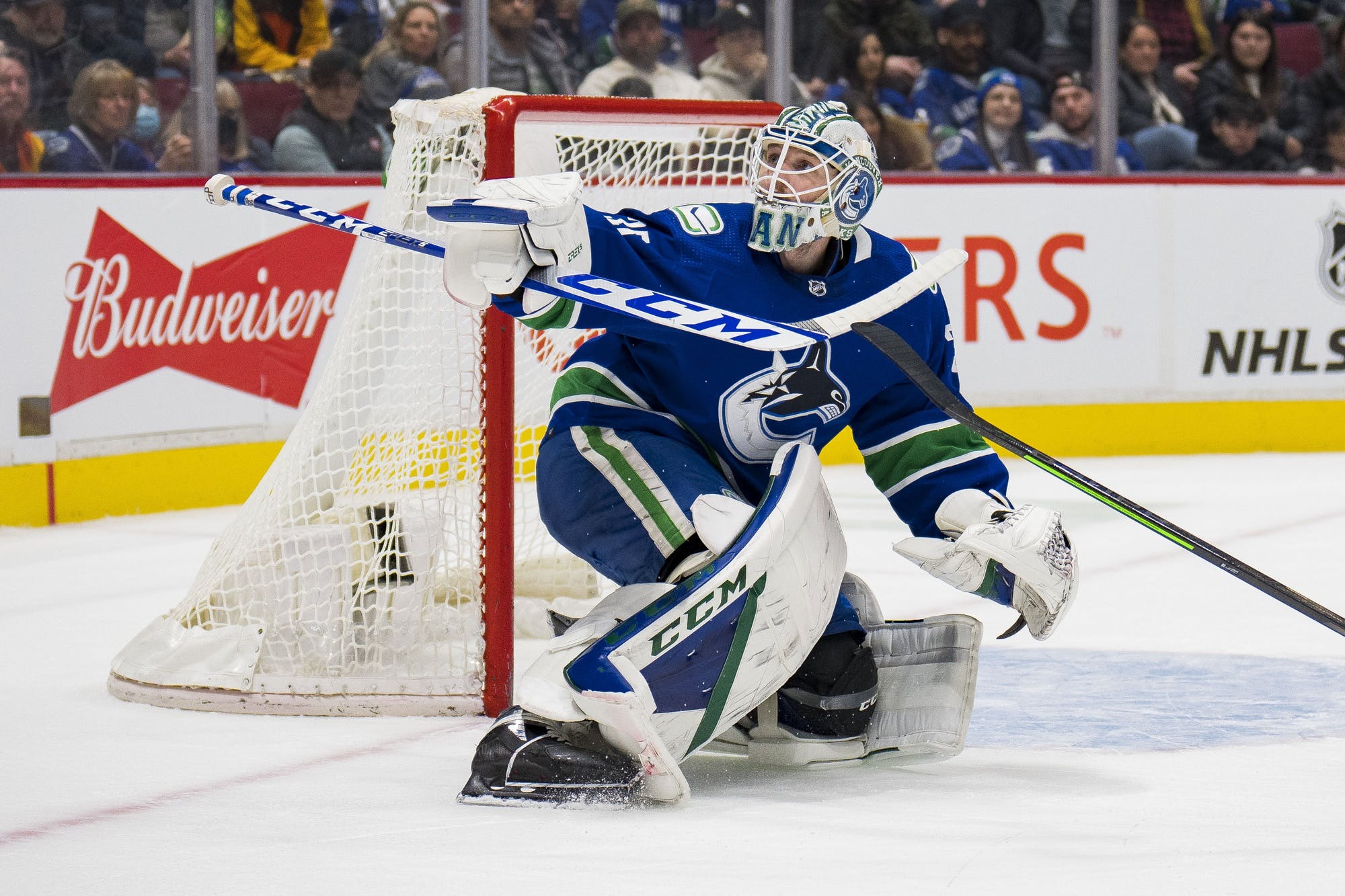 By David Quadrelli
4 months ago
For the second time this preseason, the Vancouver Canucks will play a game on home ice at Rogers Arena.
On Sunday, the Canucks lost both of their split-squad games against the Calgary Flames. The game in Vancouver was much closer, with the Canucks falling in overtime 3-2; while the team in Calgary was shutout by a score of 4-0.
Tonight, the Canucks will have a chance to right the ship, as they’ll have an elite netminder in net.
And no, we’re not just talking about Arturs Silovs.

Here are the Canucks’ line rushes from morning skate:

Thatcher Demko gets the start

Thatcher Demko will make his first start of the preseason this evening.
Demko arrived very early in Vancouver to get in some extra work with Ian Clark ahead of this season, and although they were casual on-ice sessions and simple scrimmages, for the most part, Demko certainly looked sharp anytime we saw him.
Ahead of training camp, Demko talked about how he wants to force his way into the conversation among the game’s elite netminders, and tonight is his first chance to do that.
“It’s his first kick at the can, I mean it’s preseason but we all expect Thatcher to be good and I expect him to be good again,” said Bruce Boudreau. “He works very hard and he’s anxious to get back. He’s in tremendous shape, and he feels great. I’m not a goaltending expert, I just know he stops a lot of pucks, and we’d like him to continue to do so.”
Boudreau added that we may see Demko play the first two periods with Arturs Silovs coming in for the third this evening; with Spencer Martin and Colin Delia manning the crease on Saturday evening’s tilt with the Kraken in Seattle.

Linus Karlsson’s getting a chance

By now, you’ve probably heard of Linus Karlsson.
The 22-year-old Swede broke Elias Pettersson’s rookie scoring record in the SHL last season, and signed with the Vancouver Canucks shortly after.
Now, Karlsson was three years older than Pettersson was when he did it, but 26 goals and 20 assists through 56 SHL games is impressive nonetheless.
Tonight, he’ll get a chance to skate alongside Pettersson and Kuzmenko in the spot previously occupied by Ilya Mikheyev, who is currently considered week-to-week with a lower body injury. Boudreau told reporters today that Mikheyev could start skating next week.
With the injury, Linus Karlsson is getting a better opportunity to prove himself than maybe he could have even hoped for.
“He’s a goalscorer,” Boudreau said of Karlsson’s spot in the lineup. “When you give him an opportunity in tight, I mean, he puts the puck in the net. So we thought, if you want to give people fair chances, you put them with the best, and so that’s what we’re doing.”
Boudreau added that he’s hoping by playing in some NHL games with NHL linemates, Karlsson will be able to pick up his pace and get a taste of what it’s going to take to compete at the NHL level.
Karlsson is almost certainly headed for the AHL once the preseason concludes, but with the way the injury bug has been hitting the Canucks early on, he may just end up logging some NHL games sooner than anyone would have thought.
Puck drop is at 6:30 PM tonight from Rogers Arena. We’ll have full coverage post game, including our award-winning analytics-based post game report, The Statsies with Michael Liu going up tomorrow morning.
News
Recent articles from David Quadrelli