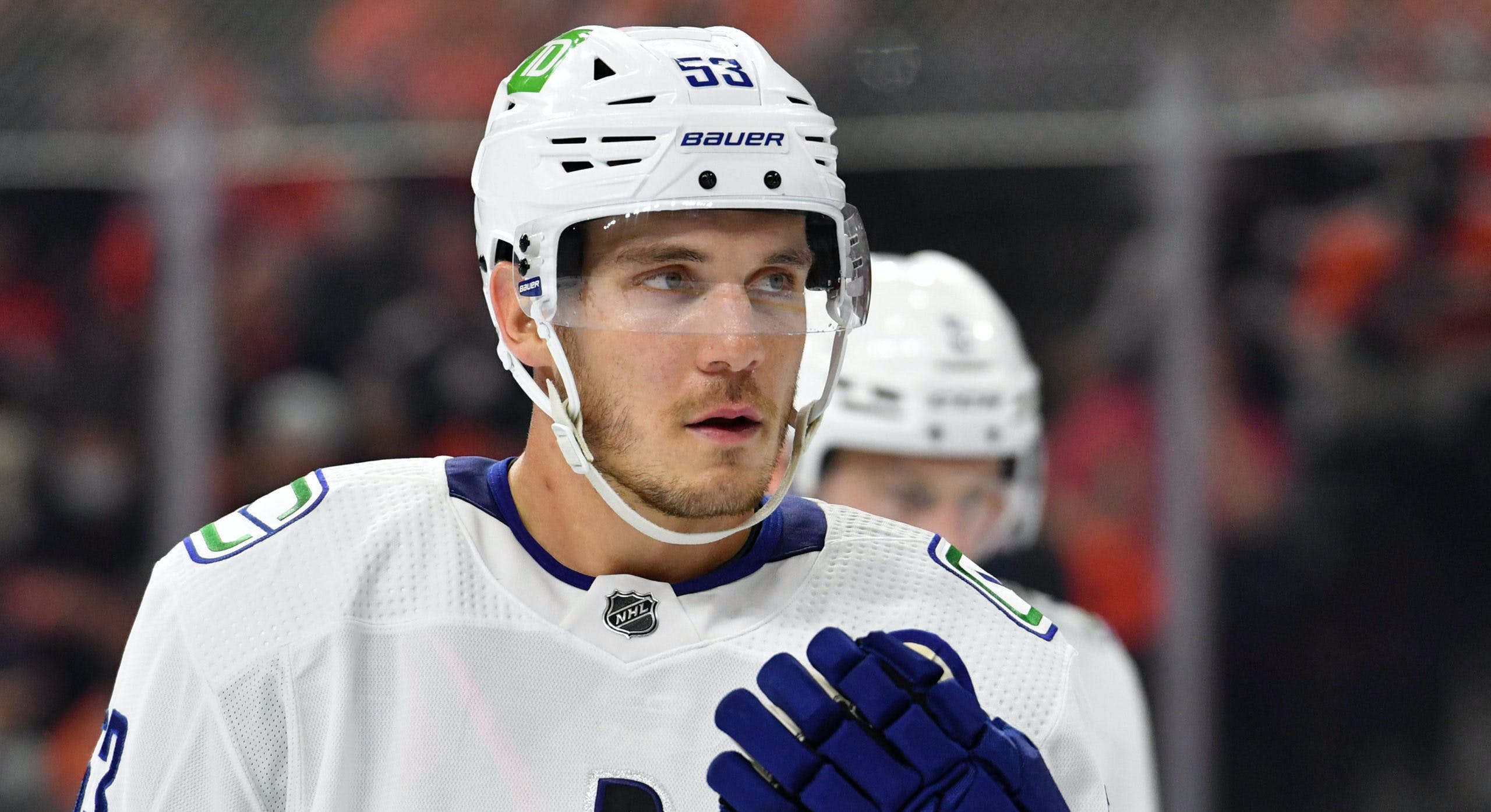 By Faber
4 months ago
We’re back out at Scotia Barn — more commonly known as 8 Rinks — in Burnaby, this week for the continuation of Canucks summer skates as more and more players arrive and prepare for training camp in Whistler at the end of the month.
Today, we saw four familiar top-six forward faces, J.T. Miller, Brock Boeser, Conor Garland, and Bo Horvat hit the ice for the first time at these summer skates.
The group saw most of their NHL lineup in attendance with Elias Pettersson and Quinn Hughes rumoured to be in town for Tuesday’s skate. We saw Tanner Pearson, Bo Horvat, J.T. Miller, Conor Garland, Brock Boeser, Curtis Lazar, Nils Höglander, Vasily Podkolzin, Andrey Kuzmenko, Ilya Mikheyev, Jason Dickinson, Tyler Myers, Tucker Poolman, Travis Dermott, and Kyle Burroughs on the ice for the skaters. Thatcher Demko and Mikey DiPietro were the goalies who skated with the NHL group.
Not only was there a big group of NHLers but we also saw a second group take the ice afterwards that featured a majority of the Abbotsford Canucks players. A few key names to mention from the second group were Danila Klimovich, Noah Juulsen, Jett Woo, Arshdeep Bains, and Tristen Nielsen.

The stars are aligning

We saw most of the team’s top-nine group on the ice with Monday’s addition of Boeser, Miller, Horvat, and Garland. The four forwards must have travelled in on the weekend because they were ready to get to work early Monday afternoon and skate off some of the summer rust.
With less than two weeks to go to training camp, it’s nice to see the top-end players taking the ice for the summer skates. Boeser was back to shooting the puck with authority and the ice surface was definitely louder with Miller and Garland in attendance.
Bruce Boudreau made an appearance where he shook some hands, kissed some babies, and hung around on the bench to have some quick chats with passing skaters.

After a summer in which his agent was able to assist the Canucks with finding a trade, goaltender Mikey DiPietro was on the ice with the NHL group on Monday.
DiPietro had a strong finish to the season with the Abbotsford Canucks but finds himself in a tough situation with how the organization has handled his development over the previous two seasons. We were expecting to see DiPietro be a horse for the AHL team last year, and though he did finish the season with nine more games played than any other goalie, he was jumped by Spencer Martin and now the team looks to want to invest in the younger netminder, Arturs Silovs.
There’s clearly still a ton of talent in DiPietro, who turned 23 back in June. This is a big year for DiPietro and the organization is going to have to recommit to him if an NHL future is in the cards for the former starting goalie for Team Canada at the World Juniors.
During his hot stretch last season, DiPietro posted a 9-2-2 record when the Abbotsford Canucks were making their push for the playoffs. It’s still a valid question to ask if DiPietro will be a big piece of the AHL team — let alone the organization — this season.
From all accounts, DiPietro has worked extremely hard this offseason and is wanting to prove that he is still a valuable goaltending prospect who is ready to turn the corner and set his sights on the NHL.

Demko is ready for game action

The Canucks’ starting goalie has been on the ice for these summer skates for a few weeks now. Demko is spending a lot of time with Ian Clark and looks like he is ready to get into some game action as soon as possible.
We do have just one quick clip of Demko rolling around and covering up the puck during a drill.

The only player who was made available to speak to the media was captain Bo Horvat.
Horvat was asked about his summer and how recovering from an injury affected his offseason work. He mentioned that it did adjust his timeline for getting back into the gym a bit, but aside from that, he is feeling great for the season and is ready to work hard over the next dozen or so days in preparation for training camp in Whistler.
“It wasn’t too much different,” said Horvat when asked about recovering from his injury before beginning offseason training. “I just knew it had to take his time to heal. But for myself, as soon as it was healed, I was trying to get skating again and get back on the ice as early as possible. For me, I get better on the ice. As soon as I got the go-ahead from the doctors, I started skating and have been on the ice ever since.”
He was also asked about his contract situation as the Canucks’ captain is heading into the 2022-23 season as a pending unrestricted free agent.
“It’s a lengthy process,” said Horvat. “I’m kind of leaving that up to my agency and Pat Morris, and just keeping it private. Obviously, I want to be in Vancouver and I want to stay here and I love our group. My wife and I love the city. If I wanted to play for one team for my whole career it would be the Vancouver Canucks. So obviously it’s a long process and we’ll see where it goes. It’s not my job to have to worry about it right now. I’m back with the guys I’m excited to be back.”
This conversation not going to disappear any time soon and Horvat understands that this is a big hockey market in Canada. Any Canadian team that sees their captain head into a season where they are an unrestricted free agent will be a story. Horvat said that he is going to be leaving with his agent Pat Morris.
“I’m just focusing on playing,” said Horvat. “I’m going to leave that up to Pat, Patrik and Jim. For me, I just want to be a great leader. A guy that’s going to show up every single day and work hard and lead by example and then do whatever I can help his team win right now because right now I play for the Vancouver Canucks and that’s why I want to be.”
Aside from the contract talk, Horvat shared some laughter with the media when he spoke about welcoming his second child to the family and how much changes when you have multiple kids to parent.
“[I’m] busy, real busy, it changes things,” said Horvat with a laugh. “I thought one was a lot and two is a whole different animal. Luckily, she’s an angel and her brother beats her up but she just keeps on smiling. He’s definitely a little jealous right now. But no, they’ve been great.”
Content
Recent articles from Faber