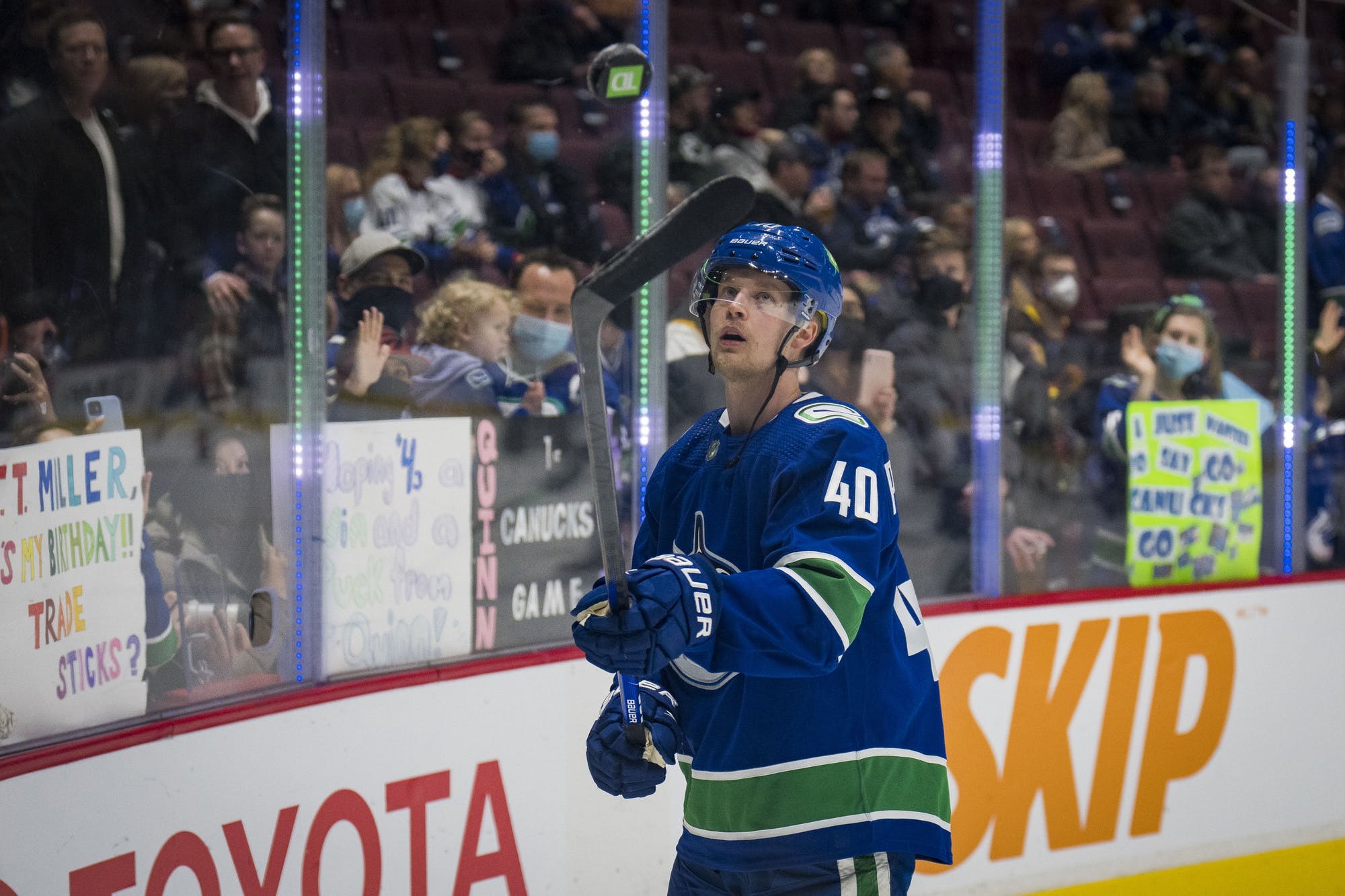 By David Quadrelli
8 months ago
The Vancouver Canucks were back practicing today, and a familiar face returned and took part in full line rushes.
Let’s just get right into it.

Elias Pettersson, who has been out for the past couple of games, was back on the ice today skating between Nils Höglander and Alex Chiasson.
There’s no guarantee he’ll play tomorrow, as head coach Bruce Boudreau stressed that he’s still considered day-to-day.
So that’s the good news.
The bad news is that Höglander left the ice with an injury and was replaced by Nic Petan in line rushes as a result.
Höglander went to the bench and was seen stretching out his left leg and chatting with athletic therapist Nick Addey-Jibb, but went down the tunnel.
Unsurprisingly, Bruce Boudreau didn’t have an update on Höglander when he spoke with media immediately after practice.
Additionally, Thatcher Demko took another maintenance day, which indicates what we assumed would be the case: Vancouver is getting ready to ride with Demko down the stretch run and storm their way into a playoff spot, but as Bruce Boudreau said — Halak will be used as well.
But more on that later.
Here are the line rushes:
Additionally, Noah Juulsen wasn’t on the ice, which indicates Tucker Poolman is close to returning to game action. He skated as the extra defenceman today, and Boudreau said he’s very close and predicted that Poolman would play at least one game this weekend when the Canucks have back-to-back games.

Bruce Boudreau said that he expects to use Jaroslav Halak down the stretch run.
“You’re tempted you just never know,” said Boudreau about the idea of playing Demko on back to backs. “I mean, we take it a day at a time. Let’s see if we’re successful, and we’ll see how it works out. We’ll get to back to backs next week so we got to figure out a plan here. We’re thinking of a plan but we got to, you know, put an etch in the stone type thing.”
“Jaro’s a guy that’s going to be used, and he’s going to be used sooner than later,” added Bodureau. “As a matter of fact, Ian was talking today about how well that Jaro has been practicing. And listen, believe me, as a coach, I want to play him. I just think you got to go with the hot hand at the present time. But if we want to get in and we want to make any noise, we’re going to need Jaro to play, and to play well.”
Luke Schenn talked about how much of a positive aura Brad Hunt brings to the room.
“He’s awesome to be around,” said Schenn. “Everyday, just so much positive energy. I mean, like the first day I showed up to training camp here, he came up to me, gave me a big hug like ‘hey Schenner! How you doing?’ And I’m thinking like ‘where have I played with this guy?’ and that was the first time I’ve ever met him.”
“He’s just that positive guy he doesn’t change and he goes by everyone. You get 25 fistbumps a day from him saying ‘hey, good job’ or whatever. He’s just a positive guy to be around and yeah, we love him and he’s playing really good.”
Boudreau further expanded on the Hunt praise, in a similar way to Schenn.
“His attitude has been the same no matter what,” said Boudreau. “I sat him about 20 games in a row in Minnesota and he’d still say ‘Hi Bruce!’ every morning. There’s never a bad day for Brad, and obviously he’s playing really well.”
Uncategorized
Recent articles from David Quadrelli