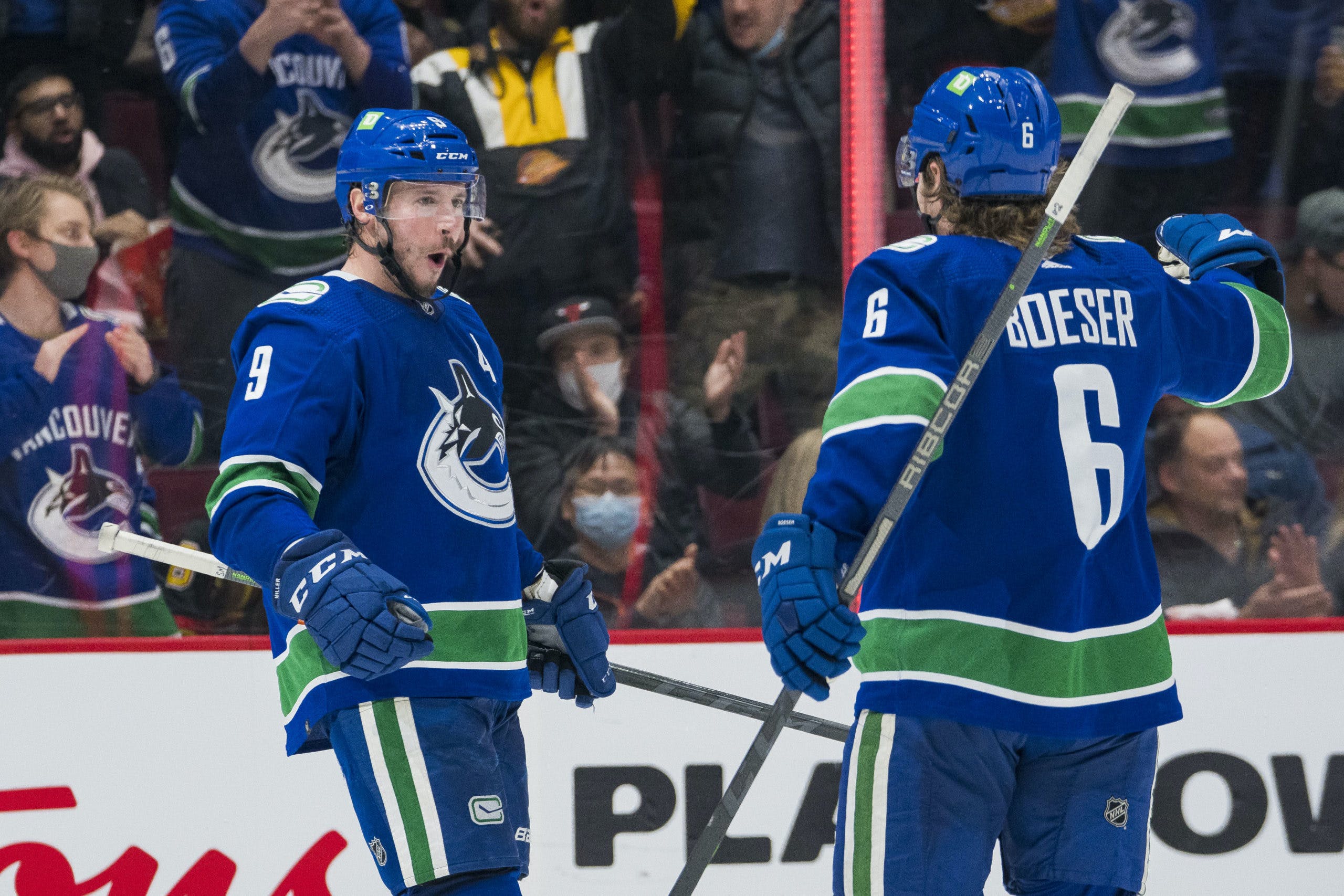 By Faber
2 months ago
The Canucks made changes to their lines on Wednesday at practice ahead of their matchup with the defending President’s Trophy winners, the Florida Panthers.
Bruce Boudreau ran the group through high-intensity drills in which they needed to work on breaking the puck out of their zone and moving through the neutral zone with good passes. The coach stopped the practice multiple times to let his players know that they needed to be better in these drills and focus in practice if they wanted to build good habits for games.
Let’s chat about the lines and what we saw.

Brock Boeser appears to have new linemates as he was moved up the lineup to play with J.T. Miller and Bo Horvat.
Nils Höglander was moved down to a line with Sheldon Dries as the right wing position rotated between Jack Studnicka and Conor Garland.
Studnicka took the first reps which could indicate that Garland may find himself on the outside looking in when it comes to Thursday’s game against the Panthers. Big emphasis on could there.
Elias Pettersson’s line stayed the same with Ilya Mikheyev and Andrei Kuzmenko on the wings.
The fourth line also stayed the same as Dakota Joshua, Nils Aman, and Curtis Lazar stayed glued together.
Here are the line combinations before we transition into the backend.
Travis Dermott continues to be in a non-contact jersey and skated on an extra pairing with Kyle Burroughs.
That meant that Riley Stillman was back on the third pairing alongside Tyler Myers.
Oliver Ekman-Larsson and Ethan Bear stayed together while Luke Schenn and Quinn Hughes also maintained their partnership.
Phil Di Giuseppe was not on the ice for practice so we are assuming that the Canucks will assign him back to Abbotsford soon and could draw into their lineup as the AHL team plays on Wednesday night.

We caught up with Boeser and asked about his thoughts on getting back into a top-six line and playing with Miller and Horvat.
“Things have been a little different and I’ve had some different linemates over the past couple of weeks here,” said Boeser. “I’ve been trying to work hard and put my work boots on and play the right way — help our team any way I can even if I’m not scoring. I know I need to play the right way whether that’s blocking shots, getting hits or creating for our team. So, this is a big opportunity for me and I’ve got to make the most of it.”
The Canucks are in action Thursday at 7:00 pm local time. There will be a pregame celebration of the Sedin twins and Roberto Luongo’s recent Hockey Hall of Fame induction.
Editorials
Recent articles from Faber