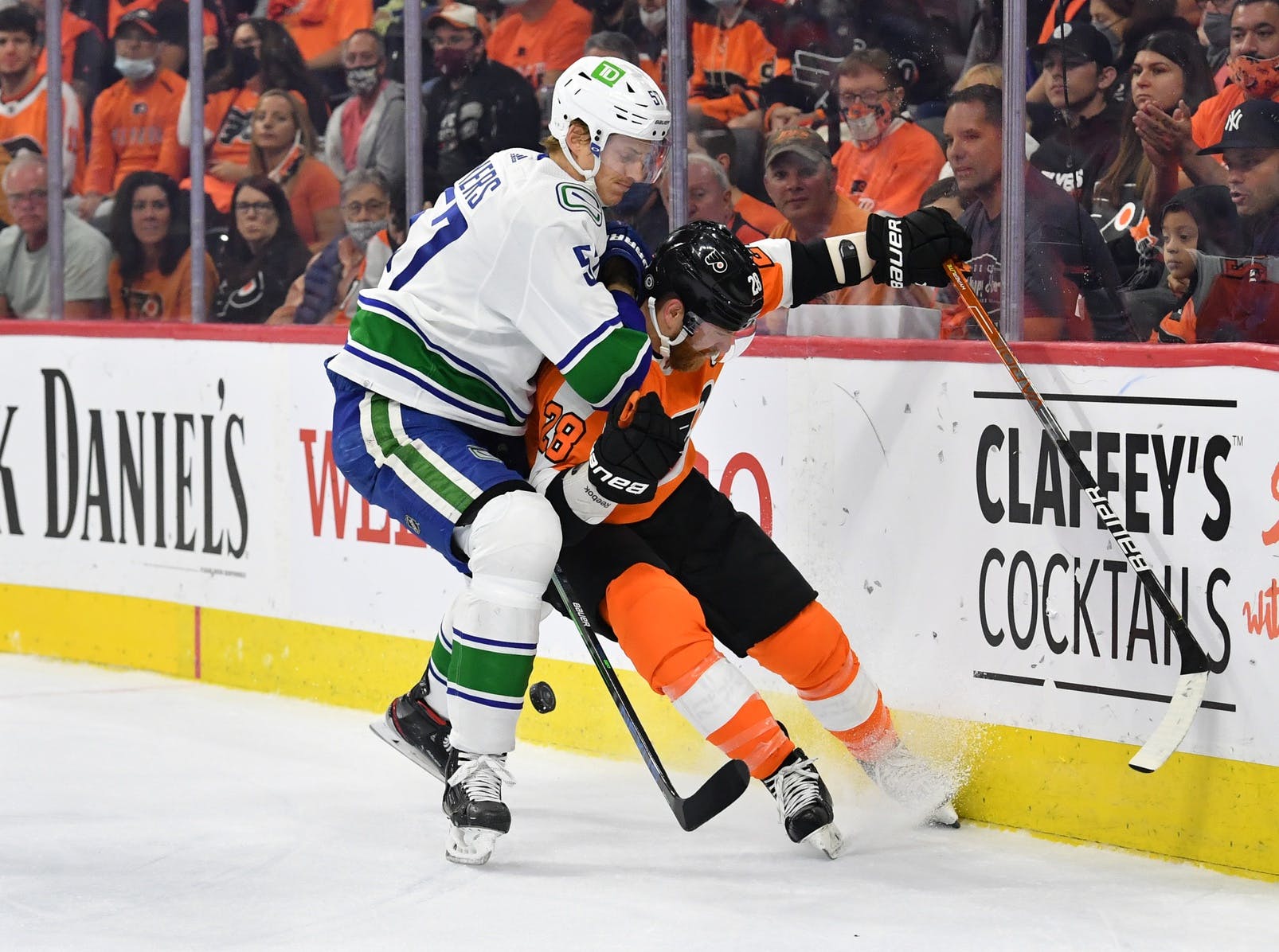 By David Quadrelli
1 year ago
The Vancouver Canucks are looking to pick up their first home win of the season tonight against the Philadelphia Flyers.
The Canucks fell to the Minnesota Wild in their home opener on Tuesday night by a score of 3-2, and are hoping to find a better result tonight.
Here’s what we saw from morning skate at Rogers Arena.

Justin Bailey impressed head coach Travis Green in his season debut on Tuesday night.
“You know what I liked his game tonight,” said Green of Bailey’s game on Tuesday. “I liked it. It gives us a bigger body. It gives us some speed, too and I thought he used it well. We told him to go down and kill some penalties down there [in Abbotsford] and he did and we put him right into the fire tonight. I thought he had a good game tonight.”
Today, Bailey skated on a line alongside Elias Pettersson and Nils Höglander. All signs point to him starting on that line tonight.
Jack Rathbone, who struggled a bit on Tuesday night, could get the night off tonight.
Rathbone skated on the fourth pairing alongside Brad Hunt, while Kyle Burroughs and Luke Schenn formed the third pairing.
Keep in mind that the line rushes above feature Tucker Poolman, who did not stay out for all of morning skate.
Poolman left Tuesday night’s game in the second period and did not return for the third. One would assume that he was testing out whatever it is that’s ailing him — Green said it was some sort of upper body injury postgame on Tuesday — and that the injury proved to be too much to play through.
The Canucks will likely rely heavily on Tyler Myers tonight, with Schenn and Burroughs both slotting in.

Travis Green confirmed that Jaroslav Halak will get the start tonight. The Flyers are coming off a back to back against Edmonton, who they managed to beat last night.
Green added that Poolman will be a game time decision tonight.
J.T. Miller said that for the Lotto Line to find success, he, Brock Boeser, and Elias Pettersson need to start winning their one-on-one battles and moving their feet.
They don’t appear as though they’ll start on a line together tonight, but as Miller pointed out, they’ve been reunited at some point in almost every game this season.
Justin Bailey was thrilled to not only get called up, but to spend an hour and a half getting to Vancouver rather than an entire day travelling in from Utica.
He’s hoping this will be the first and last time he has to make the commute this season, and is ready to seize the opportunity he’s been presented with.
Miller and Green also spoke about the Blackhawks sexual assault case filed by Kyle Beach. You can read what they had to say about that in its entirety by clicking here.
Puck drop is at 7 PM from Rogers Arena tonight.
Uncategorized
Recent articles from David Quadrelli