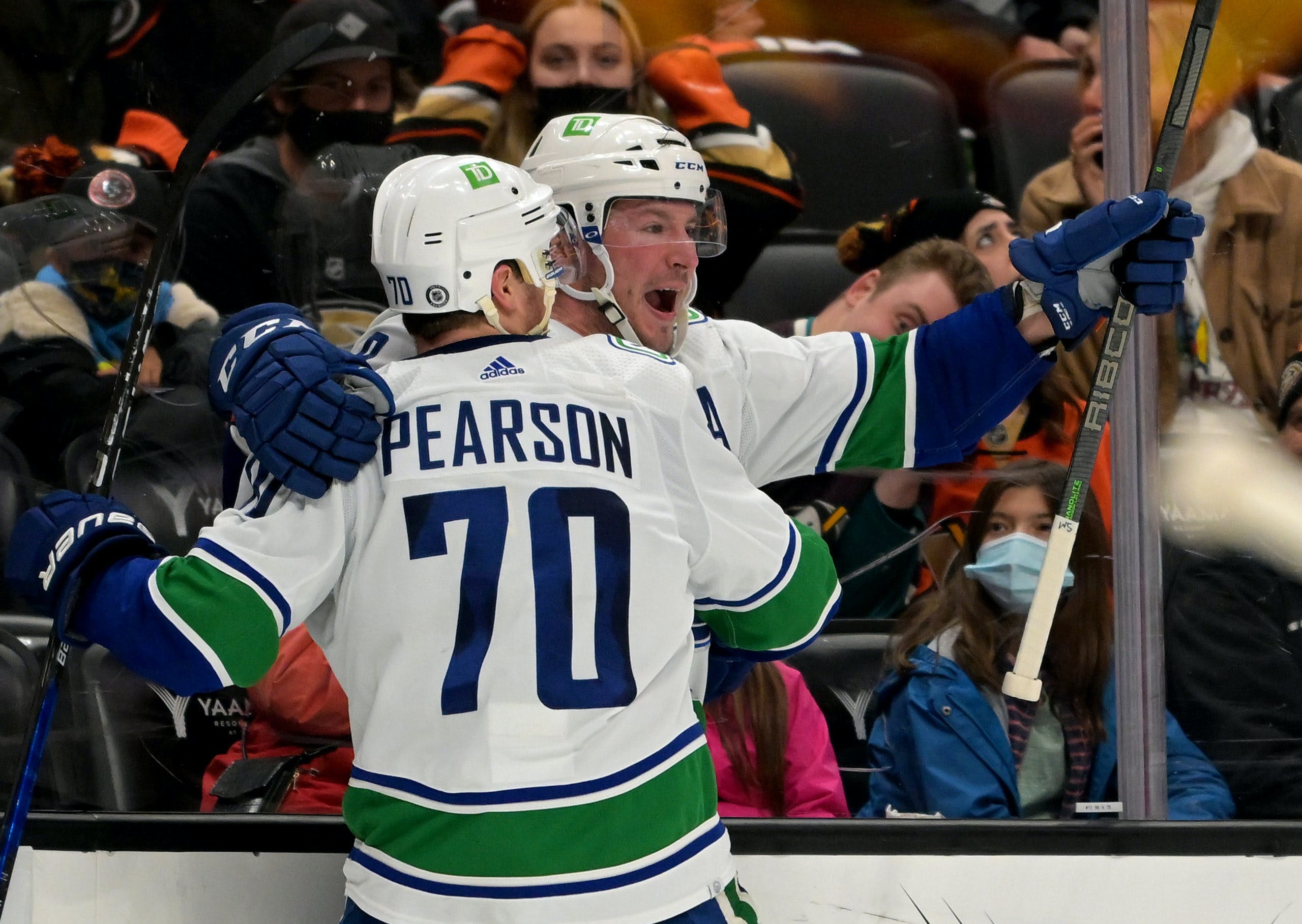 By Lachlan Irvine
11 months ago
For the Vancouver Canucks, nature is healing. Just take a look at the tickets left for tonight’s tilt against human highlight reel Trevor Zegras and the visiting Anaheim Ducks.
The fans are returning to Rogers Arena at 100% capacity for the first time since that memorable comeback against the Columbus Blue Jackets back on December 14, and not a moment too soon. Vancouver is fully engulfed in the playoff race while trade rumours swirl around them, and a sold out crowd could provide a great tonic for drowning out the background noise and putting together a strong 60-minute effort.
The Canucks are riding somewhat of a small hot streak in February, with four wins in their last five games. Anaheim has been less fun of late, having lost three games in a row and six of their last ten.
Let’s go the lineup!

After an optional skate this morning, Bruce Boudreau said that the team will see no lineup changes from the group that played in Thursday night’s win against the Sharks. Thatcher Demko will once again get the start in goal, after a rare shaky outing against the Sharks.
The Canucks new-look first line of Bo Horvat, J.T. Miller and Brock Boeser has been showing strong chemistry in the last pair of games, combining for eight points and half of Vancouver’s eight goals. Elias Pettersson posted a pair of assists against the Sharks, and noted sniper Juho Lammikko will be looking to push himself farther into the top five Canucks scorers list during the Bruce Boudreau era.
Quinn Hughes made it clear he hasn’t skipped a beat despite missing three games in COVID protocol, after potting a goal and an assist against San Jose. He’ll likely see some hard matchups again tonight against the likes of Zegras, Troy Terry and Jakob Silfverberg.

Bruce Boudreau played up the importance of this game for two division rivals fighting to stay in the playoff race. The Ducks sit two points behind the LA Kings and the second wild card spot with two more games played, while Vancouver trails by five points. “To me it’s got playoff atmosphere written all over it,” Boudreau said.
“They’ve lost a couple in a row, I think their sense of urgency is there. Ours has been there for two months, so I think it’s going to be a pretty exciting game.”
It’s also a game that hits close to home for Boudreau, who coached the Ducks from 2011 to 2016. “They still have three defensemen, a goalie, half a dozen forwards that were there when I was there, so I get to know them when you’re there for almost five years,” Boudreau said. “When I was away individually I’d love to watch them play and hope they have success, but at the same time you always like to beat your best friends.”
J.T. Miller spoke highly of his chemistry with Boeser and Horvat, but still sees room for improvement going into tonight’s contest. “I think we could take over the game offensively a little bit more, I think we could spend more time in their end, and I think they’d say the same,” Miller said. “I think we look forward to another chance to get to know each other on the ice, us three haven’t been together a lot. But I’ve played with both of them a little bit, and like I said they’re easy to play with, so nothing changes from our standpoint on how we’re supposed to play the game.”
Game time at Rogers Arena between the Canucks and Ducks will be at 7:00 PM Pacific, with Sportsnet Pacific carrying the game for Hockey Night in Canada.
Uncategorized
Recent articles from Lachlan Irvine