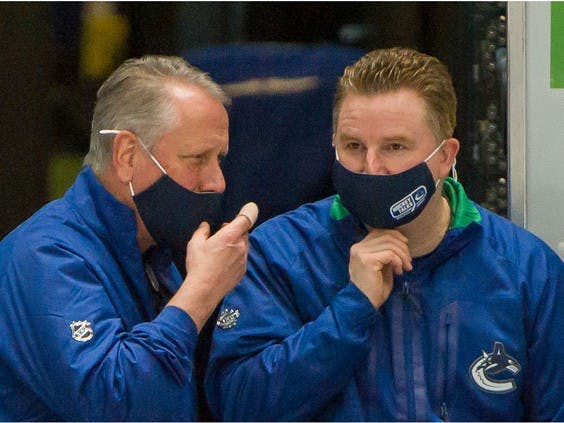 By David Quadrelli
10 months ago
On October 23rd, Vancouver Canucks equipment manager Brian “Red” Hamilton’s life was forever changed.
As the Canucks played their first game behind enemy lines at Climate Pledge Arena against the Seattle Kraken, a woman went to great efforts to get Hamilton’s attention.
“I’m walking off the bench and she put her phone up to the glass,” said Hamilton, who is no stranger to having fans — especially opposing ones — try to get his attention for all the wrong reasons.
But this certainly wasn’t one of those times.
On the woman’s phone, Hamilton said he read the words “the mole on the back of your neck is cancer” in big, colourful lettering.
Saturday morning, the Canucks tweeted out the following letter from Hamilton: 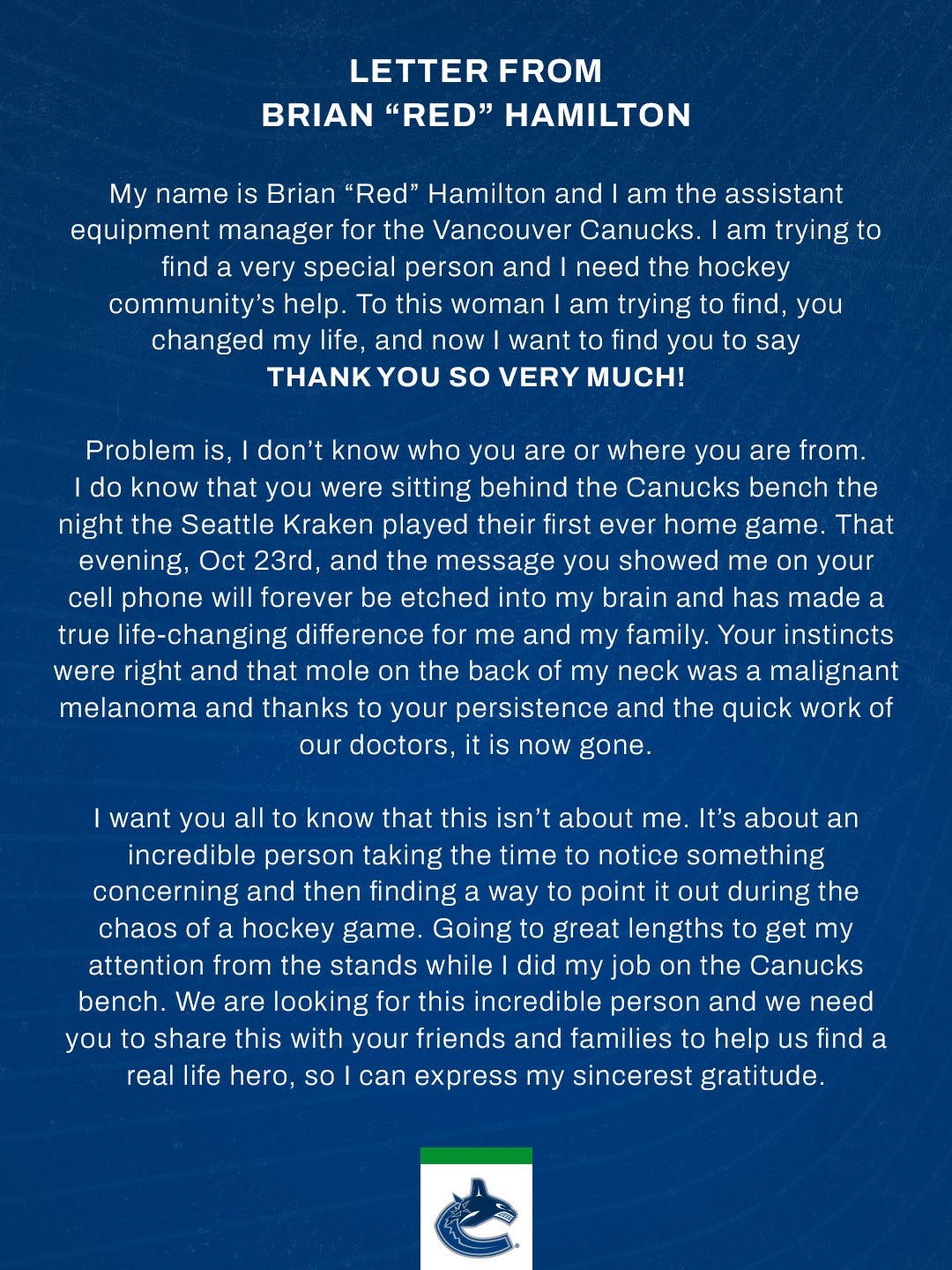 The mystery woman behind the away bench at Climate Pledge Arena on the 26th was diligent in spotting and making Hamilton aware of the harmful-looking “mole” on his neck. Hamilton says he asked the Canucks’ doctors for their opinion on it, and they didn’t like the look of it either.
The Canucks’ team physician, Dr. Jim Bovard, cut the mole out of Hamilton’s neck and sent it in for proper testing.
The growth was then revealed to be type-2 malignant melanoma, which means it hadn’t penetrated the skin just yet. Malignant melanoma is a type of skin cancer that develops from the pigment-producing cells known as melanocytes.
“The words out of the doctor’s mouth were if I ignored that for four to five years, I wouldn’t be here,” said Hamilton. “I didn’t know it was there, she pointed it out — how she saw it boggles my mind. It wasn’t very big, I wear a jacket, I wear a radio on the back of my jacket so hooks and chords are there — like, she’s a hero. I wish she was sitting here so that you guys could talk to her about what a great human being she is.”
The letter was quickly retweeted all throughout hockey twitter and was even picked up by some more mainstream Twitter accounts as well.
The Canucks published that letter shortly before 10 AM Pacific Time and roughly an hour later, a woman posted the following message into a Facebook group called “Ladies Of The Kraken”:

Oh my gosh!!! This was my daughter! She just got accepted into multiple medical schools. We have season tickets behind the opposing team and she noticed the mole on the back of his neck so she typed a message into her phone and knocked on the glass window to get his attention. She finally got his attention and he looked quickly and then nodded. We didn’t think any more of it. This is absolutely amazing! She will be at the game tonight. I’m so happy to hear this news!

Less than two hours after the original tweet was posted, the Canucks tweeted out the following update:
The woman, named Nadia, will be at the game tonight as the Canucks face the Kraken. When asked what his reaction will be if he’s able to meet her tonight, Hamilton said:
“Thank you, and then my mom wants her to know that she loves her,” said an emotional Hamilton. “I will thank her for being persistent. Like she really went over the top to get my attention. It’s not easy. You know, as was said earlier, there’s a lot going on and people are asking for things, or people are saying things that you don’t like — you just want to get off the bench — and she was so persistent. I want her to know that, if I do get the opportunity to meet her tonight — which I really hope I do — I want her to know that her persistence was what saved my life and obviously, I want to say thank you.”
2022 is certainly off to a good start for Hamilton and the entire Canucks family.
Uncategorized
Recent articles from David Quadrelli