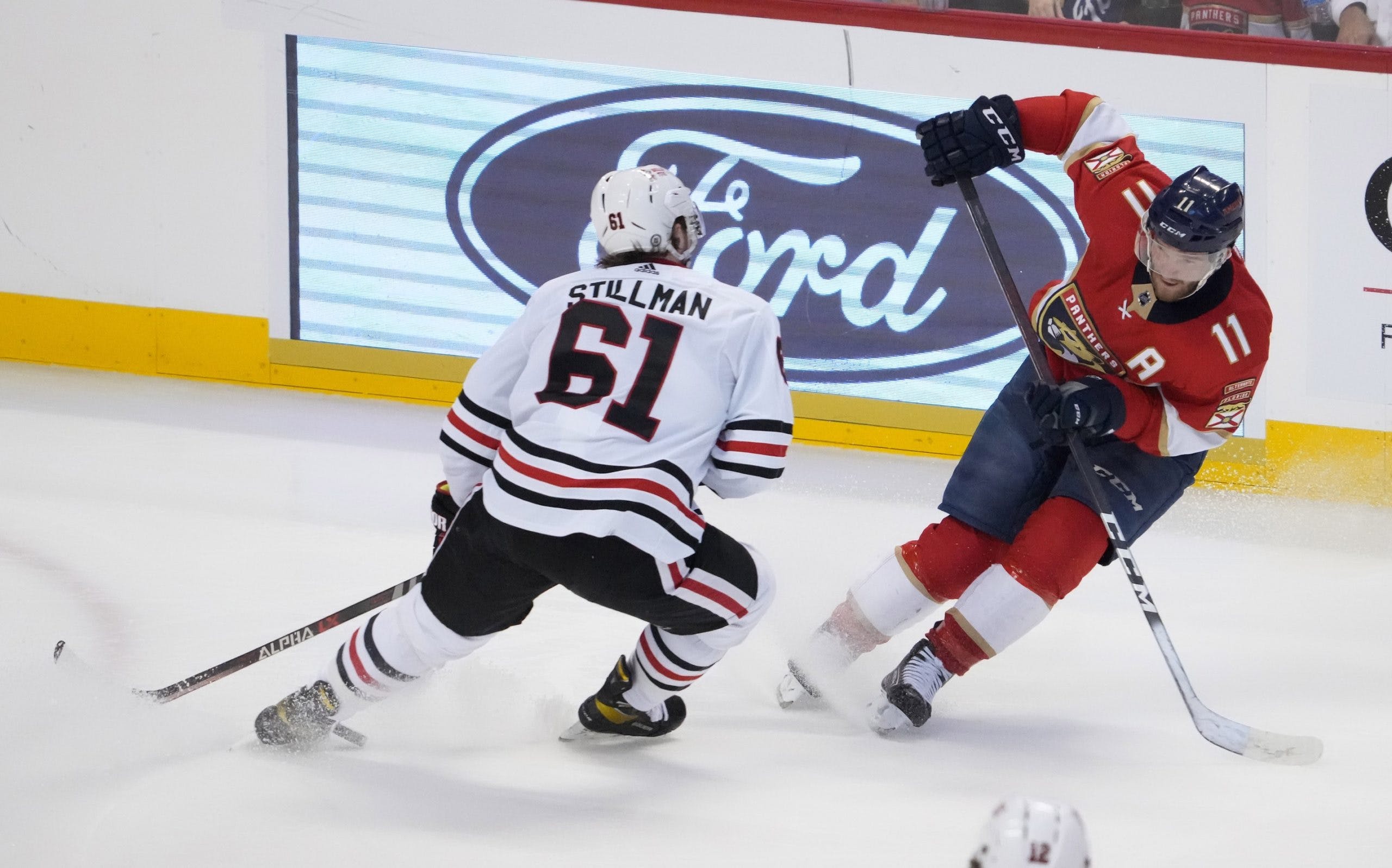 By Lachlan Irvine
3 months ago
Riley Stillman was sitting on his couch in Chicago watching preseason hockey when he found out he’d become a Vancouver Canuck.
“I was in a bit of a shock. I had no idea it was coming through,” Stillman told reporters on Sunday. “It’s part of the process. It’s part of the culture in our life, and I welcomed it.”
The trade that sent Jason Dickinson and a second-round pick to the Blackhawks put the 24-year-old defenceman on a sudden new path. Stillman boarded a plane to Vancouver on Saturday night and was out skating in his first practice with the Canucks Sunday morning.
The Peterborough, Ontario product arrives with a reputation as a hard-nosed physical defender who the Canucks see as a solid third-pairing option. The club’s current defensive group trends a bit on the smaller side, and the 6-foot-1 Stillman is meant to fill a long-standing gap.
The newcomer knows exactly what he was brought in to be, but he won’t let that stop him from adapting as a player.
“I’m not afraid to back down,” Stillman said. “I’m someone that’s hard to play against and wants to try and catch a piece of someone on the other team. And obviously, you want to build on it, you want to continue to grow as a player and as a person. My offence and plays in the offensive zone, it’s something that I want to work on and focus on to continue to grow. But obviously not to take away from what my identity is.”
While he has just over 108 NHL games under his belt, Stillman’s been around the league for most of his life. His dad, Cory Stillman, scored 727 points across 16 NHL seasons and won a pair of Stanley Cups in Tampa Bay and Carolina.
The wisdom his dad has imparted to him shaped Stillman into the player he is now.
“When I started in junior, Dad said that ‘if you’re going to hit people like that, you got to answer the bell’,” Stillman said. “There’s little things that he says in the summertime especially, like making sure that I’m in shape and doing stuff that way. He’s been a big part of my game and a big part of why I’m in the NHL.”
Stillman mentioned his excitement to be able to play in a Canadian market as someone who grew up watching Hockey Night in Canada every Saturday. But he’s also motivated by the difference in team direction; while the Blackhawks are expected to fight for draft lottery odds this season, the Canucks see themselves as playoff candidates.
“It makes coming to the rink more fun,” Stillman said. “You’re coming, you’re pushing, you’re trying to be not just competitive, but you want to win every night.”
“That’s what I’ve felt even just from day one. We’re here, we want to win, and guys want to win every night. Today during practice guys are like, ‘Let’s go again, let’s make sure we get it right’. It’s an exciting time.”
Stillman isn’t a stranger to some of his new teammates. Last year during an early season tilt in Chicago, Stillman ran Nils Höglander into the boards twice on the same shift before Kyle Burroughs stepped in to challenge the former Hawk.
When Stillman and Burroughs re-met in the locker room as defensive partners, their introduction was quickly forgotten.
“He walked over, gave me a high five and he goes, ‘it was one of those things’,” Stillman said with a laugh. “It’s something that happens. You’re competitive, you’re against each other and there are no friends on the ice. Now we’re part of the same team, we’re brothers. We’ll probably be going for lunch today.”
“So it’s one of those things where there’s that competitiveness, but when you come to the same team it’s like you’re best buddies.”
That intensity is why he’s here, and why he already knows the job he’s here to do.
“I have a role to play,” Stillman said. “I’m here to play hard, stir the pot a little bit, be hard to play against and bring a little bit of that grit to our back end.”
“And that’s what I’m here to do.”
Editorials
Recent articles from Lachlan Irvine