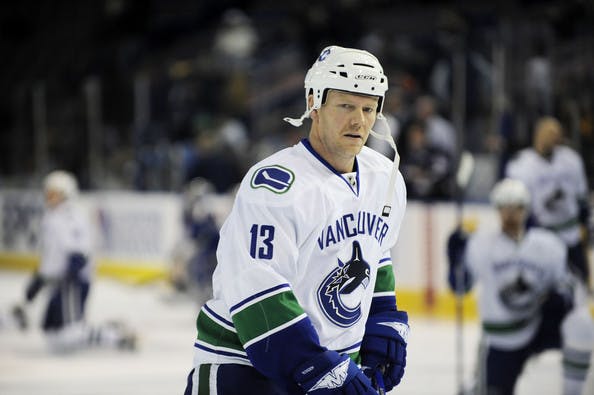 By Stephan Roget
1 year ago

The gold standard of Vancouver Canucks hockey is — at least for the time being — the 2010/11 edition of the team. That roster tore through the regular season en route to the President’s Trophy, then battled through four rounds just to fall in Game Seven of the Stanley Cup Finals.
As this current core of Canucks transitions into a more competitive era, the 2011 standard is still the one they’ll be held up against.
But it doesn’t make much sense to compare the current day Canucks to the 2011 team. GM Jim Benning made waves earlier this summer when he said, “I think in two years’ time, I think we’re gonna be real competitive and have a chance to compete for the Cup.” If you take him at his word, then the team we should really be comparing the 2021/22 Canucks to is the 2008/09 roster — the one that was quite literally two years away from competing for the Cup.
Now more than a decade in the rear-view mirror, 2008/09 was an incredibly important year for the franchise. The tragic loss of Luc Bourdon occurred the summer prior, and the emotional first-game ceremony in his memory set a tone that would be carried through the season. Despite losing two captains in the summer as Markus Naslund and Trevor Linden departed, the team bounced back from a playoff miss to win the Northwest Division before ultimately falling in the second round to the dreaded Chicago Blackhawks — all with Roberto Luongo of all people as the replacement captain. Daniel and Henrik Sedin each recorded a perfect 82 points in 82 games, then added another ten in ten playoff games, for the first point-per-game campaign of their careers. A year later, they’d well and truly break out. In 2008/09, Alex Burrows also became their permanent wingman.
The Mats Sundin saga played itself out, and Ryan Kesler was the primary beneficiary, enjoying a breakout season of his own. The same went for Kesler’s best pal Kevin Bieksa, who had what would turn out to be the most productive season of his career.
It was already Alex Edler’s third season with the team, but 2008/09 also featured a breakout performance from him, leaping from 20 points to 37.
In other words, things were good in Canuck-land — maybe not good enough to know what was coming in two years, but good enough to be encouraging.
So, how do the 2021/22 Canucks stack up against 2008/09?
Let’s find out!
(Stats for 2008/09 seasons listed in order of games, goals, assists, and points)

Daniel Sedin
(82-31-51-82)
Henrik Sedin
(82-22-60-82)
Alex Burrows
(82-28-23-51)
It’s a tough matchup for the current Canucks right out of the gate, coming up against the best line in franchise history. And no, we’re not about to anoint the Lotto Line as better than Burrows and the twins. But it’s not nearly as much of a walk as some might assume.
Elias Pettersson and, to a lesser extent, Brock Boeser have career point-per-game rates that are in line with what Daniel and Henrik had prior to 2008/09. The same goes for JT Miller if one only counts the Vancouver portion of his career.
Pettersson’s 0.97 PPG in 2019/20 is only a hair away from the perfect PPG the Sedins would go on to produce this season. From there, Henrik would move on to 100+ points in 2009/10, and Daniel would follow the next year.
Right now, there’s no way of knowing if Pettersson and Boeser are capable of taking that same step forward, but they’ve at least put themselves in the neighbourhood of feasibility.
And this might be controversial, but we can all probably admit that Miller is playing better hockey right now than Burrows ever did, right?
The 2021/22 Canucks don’t top the top line of the 2008/09 squad, but the competition is close enough to feel good about.

Pavol Demitra
(69-20-33-53)
Mats Sundin
(41-9-19-28)
Ryan Kesler
(82-26-33-59)
Moving down the lineup, the Canucks might just eke out an underdog victory here. Even though Kesler did not play center for the majority of this season, it’s impossible not to put him heads-up against Bo Horvat. Defensively, Kesler absolutely pastes Horvat, but offensively they’re close — with Horvat maybe getting the edge now that he’s flanked by the best two wingers of his career.
Pavol Demitra was still a force to be reckoned with at this point in his career, but his numbers were comparable to what Conor Garland posted with the anemic Coyotes last season. If Garland’s production takes another step forward, he’s likely a little more potent.
Matching up with Mats Sundin is an intimidating prospect for anyone, and especially a young Swede like Nils Höglander. But the soon-to-be sophomore led the Canucks in even-strength scoring and a whole bunch of other stuff last season, and he hasn’t shown any signs of slowing down.
Sundin was a lot better for the Canucks than most remember, especially after shaking off the rust — he posted eight points in eight playoff games. In terms of overall effectiveness, one would probably still take him over Höglander, even in Sundin’s final season — but, again, that it’s even a discussion is a massive compliment to Höglander.
The 2008/09 second unit is probably the stronger two-way force, but the 2021/22 Canucks could be more dangerous. We’ll call this one a draw.

Mason Raymond
(72-11-12-23)
Kyle Wellwood
(74-18-9-27)
Steve Bernier
(81-15-17-32)
Darcy Hordichuk
(73-4-1-5)
Jason Jaffray
(14-2-2-4)
The bottom-six of the Canucks in 2008/09 looks like a set of mismatched parts, but it contained several pieces that would prove vital to their success in 2011. Kyle Wellwood was miscast as a third line center and both Steve Bernier and Taylor Pyatt were only ever so-so, but Mason Raymond was starting to make noise as a sophomore and Jannik Hansen burst onto the scene as a fiery rookie.
Everyone else would be gone before 2011, but that’s to be expected of fourth line-types. The trio of Ryan Johnson, Darcy Hordichuk, and Rick Rypien provided plenty of pleasant memories, at the very least.
With Tanner Pearson and Vasily Podkolzin highlighting the wings, the 2021/22 bottom six stands a chance of being significantly more productive as the 2008/09 crew. Jason Dickinson and Brandon Sutter are a much stronger duo down the middle, especially when it comes to covering difficult matchups.
The 2008/09 Canucks are probably more physical and intimidating, but if Zack MacEwen and Jonah Gadjovich crack the 2021/22 lineup, it’s a nearer thing.
Vancouver’s current bottom-six is a work in progress, but that was also the case in 2008/09. The modern-day Canucks look to be slightly ahead on the curve.

In terms of offensive production, the Canucks’ present-day left side could easily outpace the 2008/09 Canucks, who had to rely on young Alex Edler for most of their pop.
In terms of overall effectiveness, however, it isn’t even close.
Willie Mitchell was still in his prime, yet to experience the Evgeni Malkin-induced concussion that derailed his career, and as stingy as ever paired with Kevin Bieksa.
Mattias Ohlund was nearing the end, but still more than capable of a second pairing job.
Edler was just coming into his own.
Where the 2021/22 have a handful of question marks, the 2008/09 blueline had underlined answers.
It is worth noting, however, that Edler was the only one of the bunch still around in 2011. This was a defence corps on the verge of a massive remodelling.

Here again, the 2008/09 Canucks dominate the current edition. Prime Bieksa is better than anything the Canucks have on the right side, and Sami Salo was still as much a threat from the blueline as ever — when healthy, of course.
As a top two on the right, they’re head and shoulders above any combination the Canucks can put together.
Either of Tucker Poolman or Travis Hamonic should prove more effective than Shane O’Brien ever was, especially played on his off-side as he frequently was in 2008/09. The Canucks also clearly have better depth options, but that’s not all that important in forecasting their long-term success.

We’re going to sound like a broken record here in saying that there’s no way we can list Thatcher Demko ahead of Prime Roberto Luongo, but that he’s still enough inside the ballpark to not worry about it.
Put differently, the determining factor if whether the current Canucks core ends up as good as the 2011 Cup Finalists is not going to be goaltending. Demko is a more than good enough starter.
Jaroslav Halak is probably a better backup that Curtis Sanford, for whatever that’s worth.
Jason LaBarbera was eventually acquired as a third-string option, but Cory Schneider was also beginning to peak his head inside the door in 2008/09, just as Mike DiPietro will hope to next season.

Prospects next in line

The Vancouver Canucks are presently considered to have one of the least impressive prospect cupboards in the league, and that’s going to be doubly true once Podkolzin and Jack Rathbone officially graduate. After them, it’s just DiPietro, Gadjovich, Will Lockwood, Jett Woo, Danila Klimovich, and assorted others.
The 2008/09 Canucks might have been at least considered to have a stronger pool of prospects, but time would tell a little differently.
Schneider was probably the best of the bunch, though still two years away from full-time backup duty.
Michael Grabner was about to arrive, and might have even gone on to a better overall career than Schneider — just not in Vancouver.
Sergei Shirokov had a lot of people excited, but ended up fizzling.
Cody Hodgson was, of course, considered one of the finest prospects in hockey, especially after a dazzling turn at the World Junior Championships. He wasn’t a bust, exactly, but to say he did not turn out as expected would be an understatement.
It’s honestly tough to say which prospect stable will ultimately yield more useful players.

Perhaps most important to mention are all of the players from the 2011 roster whom the Canucks had yet to acquire as of 2008/09.
All of Christian Ehrhoff, Dan Hamhuis, Mikael Samuelsson, Manny Malhotra, Raffi Torres, Chris Higgins, Max Lapierre, Keith Ballard, Aaron Rome, and Chris Tanev had not joined the organization.
Best of all, each of them would be acquired for relatively cheap over the next two years, with Ballard to only one to cost anything more than cap space or middling assets.
The 2008/09 Canucks were fine-tuned into the 2011 Canucks — and the 2021/22 will need similar, if not more sweeping, changes in the years to come if they ever want to reach the same heights.

The 2021/22 Canucks do not, admittedly, project to be as good a team as the 2008/09 Canucks were. Any comparisons that can be made on offence or in the crease are dramatically outweighed by the disparity in blueline quality and cohesion.
Yet, there’s still plenty of optimism to come out of this comparison.
That aforementioned 2008/09 blueline would go on to be renovated before 2010/11, with Bieksa, Edler, and Salo the only surviving members, joined by Ehrhoff, Hamhuis, Ballard, and Rome. A lot happened in those intervening years, including the continued progression of Edler into a top-pairing talent — something the Canucks hope will happen with Quinn Hughes.
There’s plenty of work to be done yet, and we’d be remiss if we didn’t mention that the Canucks faced far fewer cap constraints between 2008 and 2011 than the current Canucks will face for the foreseeable future.
But on a purely foundational, core-only level — insert your Sutter jokes here — the current roster assembled by Benning and Co. does at least kind of (sort of) resemble a 2008/09 that was just two years off of near-glory.
The difference — as it was then — will be the changes and non-changes made to the roster from here on out.
If hope is what you’re looking for, it’s there for the taking.
Uncategorized
Recent articles from Stephan Roget