Quarter-mark report cards for the 2021/22 Vancouver Canucks: The forwards 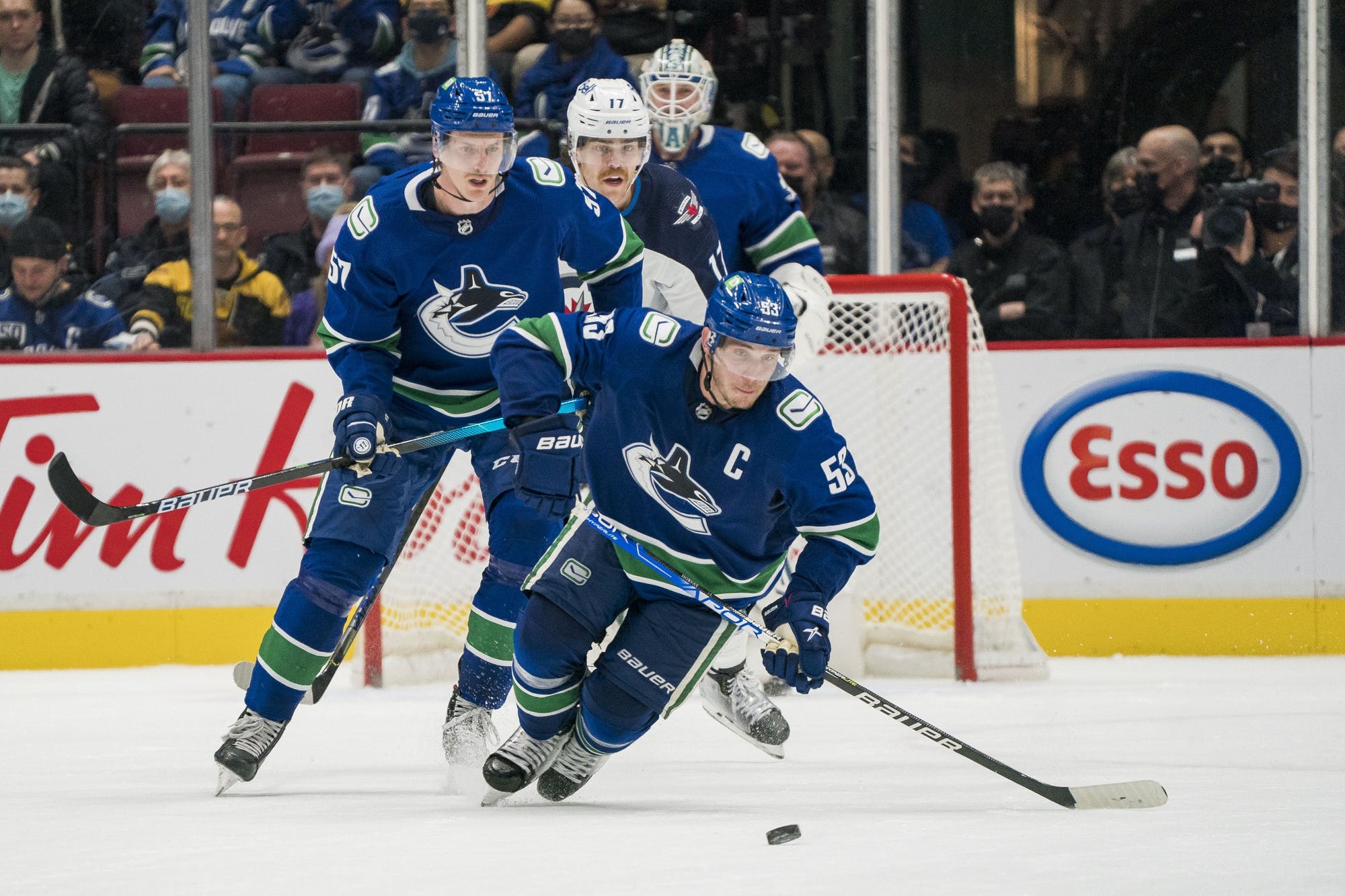 By Stephan Roget
1 year ago
For once, we’ll start with something totally uncontroversial: Wednesday’s game against the Pittsburgh Penguins marked the quarter-mark of the Vancouver Canucks’ 2021/22 season. (Actually, it was more like the 24.4%-mark, so maybe there is a controversy to be had, after all).
Where we may fall into disagreement is in how the Canucks have actually performed through those 20 games thus far.
Few will contend that the Canucks are having a successful season overall, but there’s still definitely some haggling to be had about how each individual has done. And so, below we present our official CanucksArmy Quarter-Mark Report Card, in which we’ve given each player a 20-game grade. Let us know in the comments which grades you agree with…and which you’ll be disputing.
Note: Players are graded relative to their individual expectations.

Bailey continues to be a mild conundrum. By the eye-test, he still looks fast as heck, and always seems to be pushing play in the right direction — even if he never manages to do anything with the puck. But the numbers don’t lie. Zero points, the worst Corsi on the team, and an outsized amount of goals against both at even-strength and on the penalty kill. He’s an adequate replacement player, but only barely.

The sheer amount of noise made about Elias Pettersson’s struggles have allowed Boeser’s to fly under the radar, but Boeser might just be struggling more. He’s under 0.5 PPG on the season for the first time in his career, and has been largely invisible on the ice. It can’t all be blamed on his preseason injury, either. All eight of Boeser’s points came in his first ten games, and he’s been scoreless through the last seven. And scoring is what Boeser is paid to do.

Chiasson wasn’t even supposed to be here, and had to earn his way onto the team via a PTO. Thus, it’s tough to call him a disappointment. But he hasn’t been all that useful, either. Despite plenty of time in the top-six and on the power play, Chiasson has hardly produced anything, and he’s often looked like a detriment to his linemates. His total lack of contributions to the penalty kill make it even more of a headscratcher that the Canucks lost Zack MacEwen and Jonah Gadjovich just to keep Chiasson around.

On the one hand, Dickinson has delivered the steady 5v5 defensive play that was promised when Vancouver acquired him. He’s only been on the ice for two even-strength goals against so far. But the hopes of him becoming a true shutdown center for Vancouver seem to be misplaced, because he’s yet to be trusted with many minutes against opposing top lines — and hasn’t looked very good when he has got out there against them. Dickinson is also bleeding goals against on the penalty kill, and not contributing much of his own at the other end of the ice in any situation. Perhaps expectations were placed too high, but it’s tough not to be at least a little disappointed.

Dowling was never supposed to make this team, but he did, and then he delivered some fine play on top of that. While his possession numbers stink, and were likely dragged down by the quality of his linemates, Dowling often looked to be driving play back down into the opposing end. He also proved to be a quietly effective penalty killer when given the shot. It’s not much, but it is a better impression than the rest of the bottom-six has made.

What more can be said about Garland that hasn’t already? In a season defined by heartlessness and gutlessness, Garland is all heart and guts, and he’s now one of the only reasons a Canucks game might be worth turning into. His rapidly rotating ways are already legendary in Vancouver, and while his production has slowed down a hair since his hot start, he’s still on pace to set new career highs in virtually every category.
His new contract is already looking like a bargain.

Highmore made the team after a disappointing preseason, over a few players that probably deserved it more. This was supposedly because of his PK abilities, but he’s proceeded to let in more than 12 power play goals against per minute, and not do much of anything elsewhere on the ice, either. Highmore’s possession numbers look better than those of his fellow fourth liners, but that’s probably due to occasionally playing higher in the lineup — and conveniently getting injured before the Canucks really hit the skids.

All season long, Höglander has been doing everything expected of a top-six winger except scoring. He’s the team’s best possession player, has been impeccable defensively, and often seems to be the only one on the roster putting in a truly consistent effort. His production has been spotty, with five of his nine points coming in three consecutive games, but he still looks to be perpetually on the verge of a breakout. Right now, he’s on pace for about 40 points, but the eye-test says he should be putting up closer to 60. He gets an A for doing more than almost everyone else, and an A- for still having more to give.

Horvat was probably the toughest Canuck to grade. On the one hand, Dickinson’s struggles have forced Horvat into some of the hardest deployment of his career, and he’s responded with better-than-usual analytical results. His control of shots and scoring chances is downright admirable, given his typical matchups. And despite all that, he’s still on pace for about 25 goals, which is great.
On the other hand, Horvat has not been driving play to anywhere near the degree that he normally does, and he’s on pace for his worst offensive season since his rookie year. Some of that is deployment, but not all of it. The team’s overall lack of success has also caused some to call Horvat’s leadership qualities into question. That’s a first, and it’s not an encouraging one.

Lammikko arrived in Vancouver on the heels of some decently impressive underlying numbers in Florida. Those numbers did not arrive with him. Lammikko has been absolutely buried at even-strength, buried on the penalty kill, and buried at the bottom of nearly every statistical category — and that’s with most of his minutes coming against fellow bottom-sixers. “Offensive black hole” doesn’t quite cut it. Lammikko’s stick is where offence goes to die.

Miller’s work this season pretty much speaks for itself. While the team around him crumbles, he’s back around a PPG, flirting with the top-ten in NHL scoring, and serving as the Canucks’ only consistent play-driver. Every single statistical category reflects positively on Miller — and negatively on nearly everyone else, because of how far ahead he is of the mean.
Why not an A+? If there’s one criticism to be made of Miller, it’s the occasional lack of consistency in his effort, particularly in his own end of the ice. He’s an emotional player, for better and for worse, and this season hasn’t been evocative of emotional stability.

We won’t be too harsh on Motte, as he’s just returned after missing the first month — and returned to an awful situation, at that. He’s clearly still getting up to speed, but he’s held down more minutes and tougher matchups than most of the rest of the bottom-six have been able to. If he can get back up to his old standard of play, that’s fantastic. If not, he’s still one of the best options the Canucks have on their fourth line.

Before Jim Benning and Co. signed Pearson to a three-year extension, they should have thought long and hard about whether his 2020/21 production rate was a temporary thing, or an obvious regression back to his previous career standard, accelerated by age. With just six points through 20 games despite ample time in the top-six, it’s really starting to look like the latter. To be fair, part of Pearson’s lack of scoring can be attributed to eating tough matchups alongside Horvat, and Pearson has performed well enough defensively.
But for what they’re paying him, the Canucks have to expect more offence, and it doesn’t look like it’s coming.

We’ll start with the good. Pettersson has blindly stumbled to a 0.5 PPG and some of the best possession metrics of his career, so it’s not like he’s a liability out there. But he’s sure not playing very well, either, and he’s definitely not playing like Elias Pettersson.
There’s really no need to harp on this too long. Pettersson looks lost on the ice, he looks to have lost all his confidence, and he’s actively killing the offensive chances of his teammates with his constant puck-fumbling. If we’re truly grading players against their individual expectations, Pettersson has to be at the bottom of the class.

If we’re able to remove the lens of having had three consecutive Calder Trophy nominees and just judge Podkolzin as an average NHL rookie, he’s performing quite ably. He’s not on pace for headline-grabbing numbers, but then he’s also tied for third on the team in goals, so that’s not all on him. Podkolzin has held his own at five-on-five, and he’s seemed to grow more comfortable as the season has progressed. He’s starting to lay the body with more regularity now, and opponents can’t help but take notice of that. All in all, an encouraging start to his career, and a strong transition in his first year of North American hockey.
Tune in tomorrow morning when we go over the defencemen and goaltenders!
Uncategorized
Recent articles from Stephan Roget