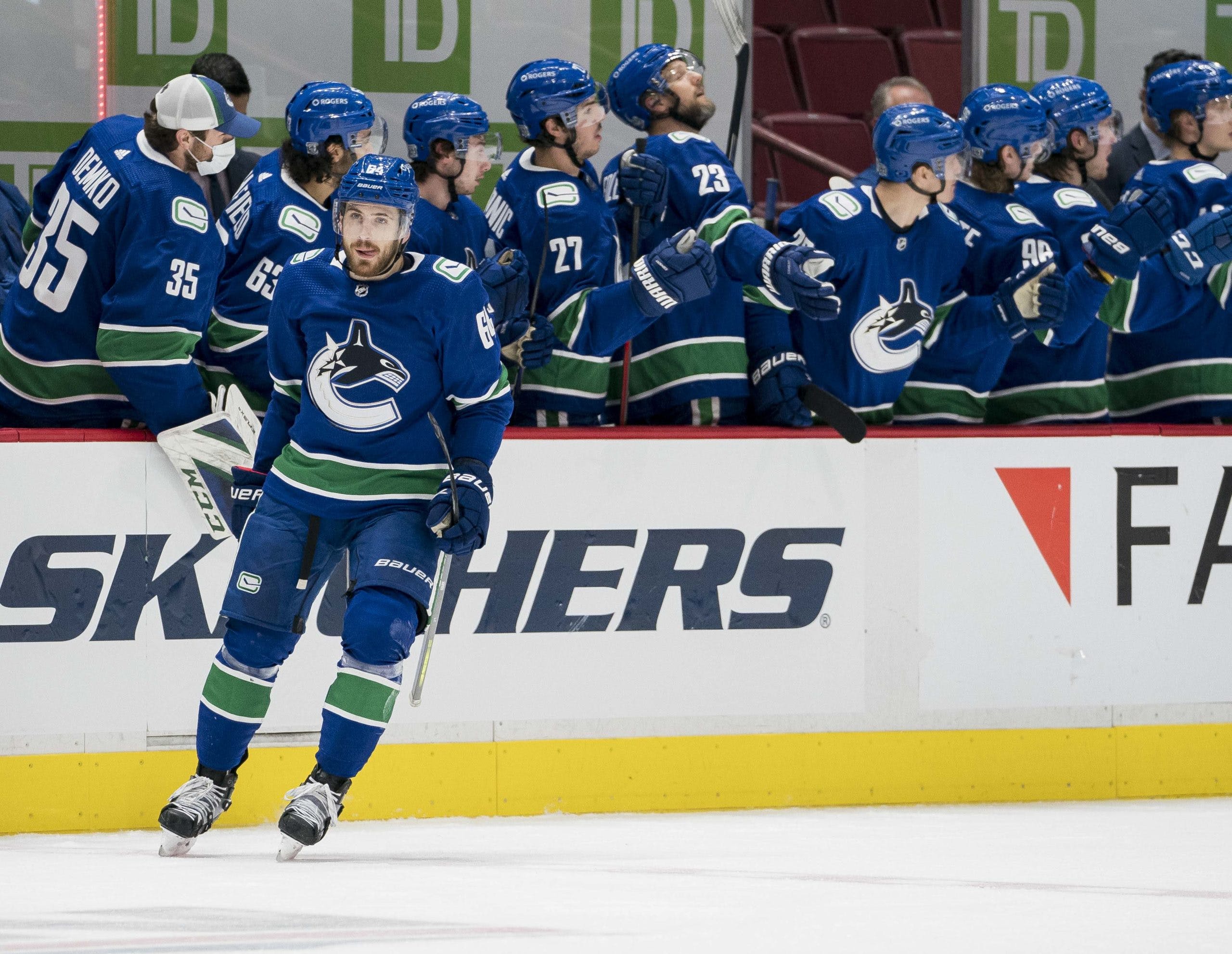 By Bill Huan
1 year ago
Welcome to the third and final installment of my 2021-22 point projection for every Canucks player who will make regular appearances in the lineup.
Before starting this series, I had anticipated that I would just predict stats for whoever makes the club’s final 23-man roster. However, with the number of injuries that have occurred since, it’s obvious that the Canucks will be shuffling different players around depending on their availability.
As a result, I’ve needed to expand my list beyond 23 players and have separated this article into two categories: players who are locks to make the team when healthy, and ones who are “on the bubble.” The first group includes skaters who might not necessarily be on the Canucks’ opening night roster but is projected to play most of the team’s games. For example, Brad Hunt might play more than Jack Rathbone to start the year, but I fully anticipate the rookie playing more by the season’s end, which is why Rathbone is listed among the locks.
Meanwhile, the “bubble” group represents those who will still suit up often but might spend more time in the press box when the club is fully healthy (*knock on wood*). This final article was definitely the toughest to put together since it’s hard to project how many games each player will actually suit up for, but that didn’t impact their individual point paces.
With that out of the way, let’s finish my 2021-22 player point projections.

2020-21 stats: 24 games played, 6 goals, 3 assists, 9 points.
2021-22 prediction: 48 games played, 8 goals, 6 assists, 14 points.
Here’s your gloomy fact of the day: outside of the 2018-19 campaign, Motte’s career-high in games played for a season is 46. He’s appeared in less than half of the Canucks’ regular-season games over the last two years, so projecting him to suit up for 50 matches this season is a more optimistic take than it might seem at first.
Even with his durability issues, many fans have predicted Motte to have a breakout season when he does hit the ice. That likely won’t happen now due to the team’s new additions, as he’ll be hard-pressed to see consistent power-play time and will continue to play fourth-line minutes.

2020-21 stats: 43 games played, 9 goals, 3 assists, 12 points.
2021-22 prediction: 54 games played, 7 goals, 6 assists, 13 points.
With the arrival of Jason Dickinson, Brandon Sutter’s already small offensive role will be reduced even further. Sutter’s new spot as the team’s 4C allows him to be properly deployed as a bottom-line player who can still be effective against depth competition. The veteran scored 1.07 points per 60 at five on five last year, which is in line with what many fourth-line players produce.
He did have a slightly inflated shooting percentage and a hat trick though, which is why I’ve projected him to score at a slightly lower pace this year. Like Motte, the bigger question surrounding Sutter is his health, and it’s hard to see him playing more than 60 games when he’s already confirmed to be out of the lineup on opening night.

2020-21 stats: 8 games played, 1 goal, 2 assists, 3 points.
2021-22 prediction: 63 games played, 3 goals, 20 assists, 23 points.
One of the few bright spots of last season, Rathbone seems poised to carve out an everyday role this year with the Canucks. With that said, it’s likely that he’ll be scratched on occasion for a more seasoned vet such as Brad Hunt, which might happen as early as opening night.
No matter how many games he ends up playing, I expect Rathbone to put up respectable numbers. He’s going to quarterback PP2 and if Jason King opts to construct two evenly balanced units, there’s a chance that the rookie could see lots of time with the likes of Brock Boeser and maybe even Bo Horvat. If this comes to fruition, then Rathbone could put up better stats than most people anticipated.

2020-21 stats (with the Lightning): 38 games played, 2 goals, 2 assists, 4 points.
2021-22 prediction: 53 games played, 2 goals, 3 assists, 5 points.
With Travis Hamonic’s availability still up in the air, Schenn will likely suit up for more games than fans would like. The veteran played well with Quinn Hughes during his first stint as a Canuck, but it seems like he’ll be partnering with Rathbone now. This will hinder his production since Schenn will mostly be on the ice with the team’s depth players, and going from the Lightning to the Canucks won’t help either. Of course, he wasn’t signed to score, so any points from the veteran will be a bonus for the team.

2020-21 stats (with the Oilers): 45 games played, 9 goals, 7 assists, 16 points.
2021-22 prediction: 37 games played, 7 goals, 6 assists, 13 points.
Chiasson is a virtual lock to make the opening night lineup at this point, but I’m bearish on his chances of actually sticking there long-term. Seven of his 16 points last season came on the Oilers’ historically good power-play, and it doesn’t seem worthwhile to have him around just to be a PP specialist when the Canucks get some of their forwards back.
Chiasson doesn’t contribute anything at five on five and isn’t a penalty-killer either, so he doesn’t fit perfectly on any line. The Canucks also have enough forwards to run two reliable PP units, so I expect him to see less game action as the season progresses.

2020-21 stats (with the Leafs): 7 games played, 0 goals, 1 assist, 1 point.
2021-22 prediction: 26 games played, 2 goals, 3 assists, 5 points.
Petan probably won’t see much action once Sutter and Motte are healthy, but the fact that he briefly played alongside Brock Boeser and Nils Höglander indicates that the coaching staff sees something in his game. Petan doesn’t have the offensive chops to be counted on to score and isn’t as reliable defensively to kill penalties, but he’s a decent enough stopgap to briefly replace players who are out of the lineup. Look for him to chip in from time to time, especially if he lines up beside top-six calibre players.

2020-21 stats (split between the Canucks and Blackhawks): 42 games played, 3 goals, 4 assists, 7 points.
2021-22 prediction: 33 games played, 2 goals, 3 assists, 5 points.
Highmore was given a golden opportunity last year following the Adam Gaudette trade by playing some minutes in the top-six, but there just isn’t much to his game that suggests he can produce at a consistent level. The 25-year-old did score a respectable three goals in 18 goals after arriving in Vancouver but that was buoyed by an inflated 15% shooting percentage. The Canucks’ new additions will cause Highmore to play fewer minutes, so don’t expect him to produce much this season.

2020-21 stats (with the Wild): 12 games played, 1 goal, 0 assists, 1 point.
2021-22 prediction: 35 games played, 3 goals, 7 assists, 10 points.
Hunt was a frequent scratch last year with the Wild, and I expect that to remain similar this year but to a lesser extent. The 33-year-old is perfectly suited as a #7/8D and can play on both sides, but he doesn’t have the defensive game and penalty killing ability to carve out an everyday spot with the Canucks. When he does play, however, Hunt will be able to create some offence with his skating ability and shot; the veteran has a shooting percentage of over 7% in three of the past four seasons, albeit in very limited sample sizes.
All stats courtesy of Natural Stat Trick.

After signing up for a free account, we’re going to give you a bunch of boxes with player names and you’re going to pick a name from each box until you’ve put together a super crew that you think can contend for a NationDrafts championship. Seems easy, right? It is easy and that’s not just because you’re wicked smaht. Sign up for FREE right here.
Uncategorized
Recent articles from Bill Huan