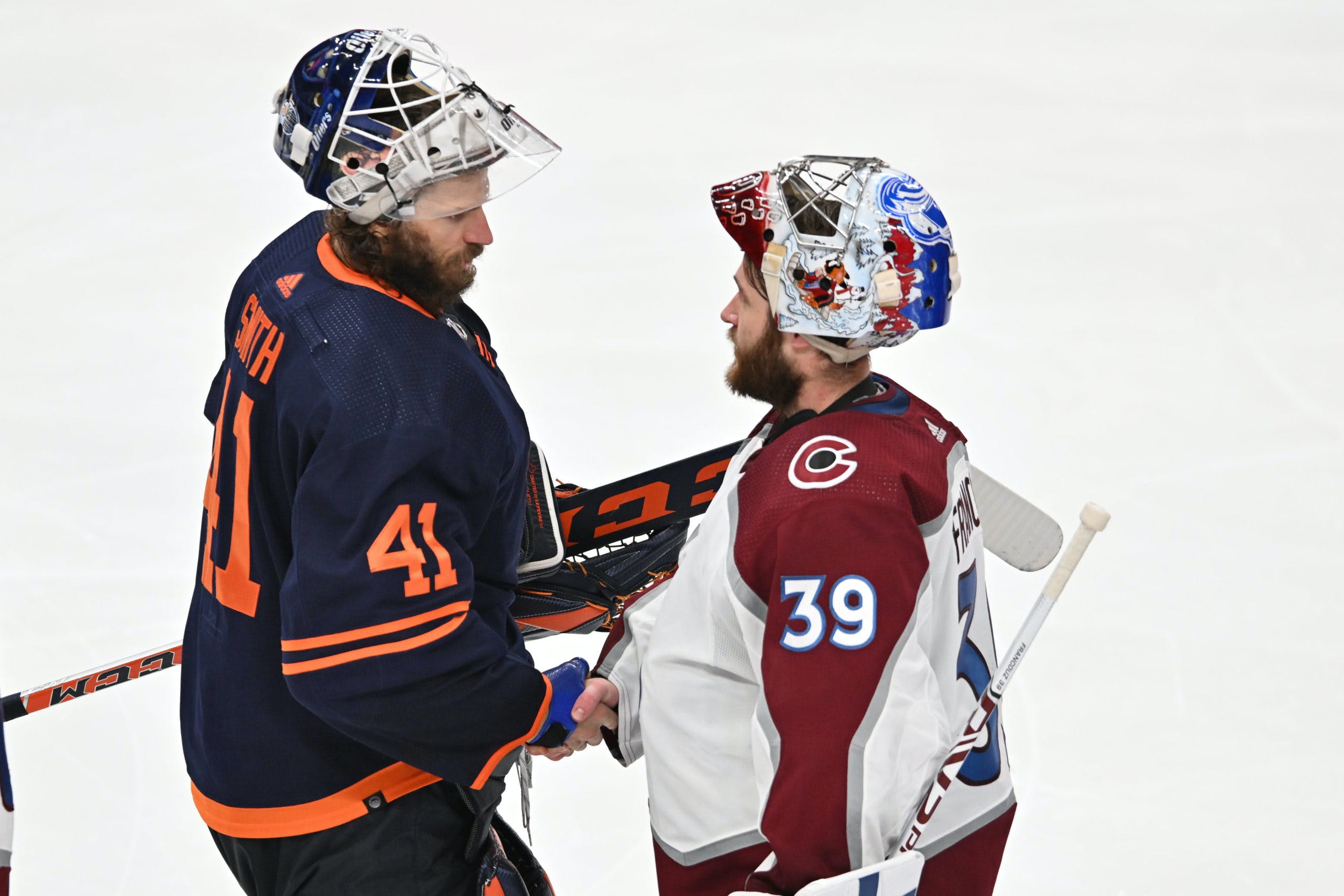 A decision for Smith

Emotions were high after the Oilers’ defeat, with Darnell Nurse revealing he played the entire postseason with a torn hip flexor, and Mike Smith fighting back tears during his post game press conference.
And apparently, the 40-year-old goaltender is considering retirement.
This from Oilers Nation’s Jason Gregor:

“I’ve heard rumblings that Smith is considering retirement. His salary next season ($2.5m) is higher than his AAV ($2.2m) so if he does retire he won’t count against the cap. He fought back his emotions in his post-game presser last night. He’s an emotional person, so maybe it was simply the disappointment of losing, but the structure of his contract, having his sons attend post-game pressers at times this playoffs, his age and his emotion last night, make me think retirement is a legit possibility… He proved he can still compete and play well in the NHL this year, but does he want to do all the work in the off-season to get ready for next season?
If he decides this is it for him, I expect he will tell Ken Holland before free agency. He wouldn’t leave the organization later in the summer when the UFA market has dried up. It is short-sighted to think replacing Smith will be easy. There are good goalies available, but how many will sign for the same $2.2m cap hit that Smith has? And are you certain they will be as good in the playoffs? Playoff success, even for top-end goalies, is far from a certainty. Ask the Flames.”
-Jason Gregor

Smith put up a .915 save percentage through 28 regular season games this year but dealt with injury problems throughout the year.
Through 16 appearances with the Oilers this postseason, Smith authored a .913 save percentage and a GAA of 3.37.
If Smith does retire, it would mean that the Oilers would need to go out and find a new goaltender, full stop.
Mikko Koskinen’s bloated deal is finally set to expire, and 23-year-old Stuart Skinner hasn’t proven he can handle a starter’s workload just yet, although he does show a lot of promise.
The Oilers could look a whole lot different in the crease next year if Smith walks away from the game and ultimately the final year of his contract.

Flames ready to buck up for Gaudreau

Johnny Gaudreau certainly picked a good time to have a career year.
Through 82 games this season, the 28-year-old winger put up 40 goals and 75 assists, leading him to set career-highs in goals, assists, points, and even plus-minus.
A pending unrestricted free agent, Gaudreau headlines this year’s free agent class and is going to have a number of suitors this offseason should he choose to hit the open market.
Ranking ahead of names like Filip Forsberg and Evgeni Malkin on Daily Faceoff’s Frank Seravalli’s Top 50 UFA’s list, Gaudreau is going to be signing for a lot of money this offseason, and all signs are pointing to the Flames being the team to put pen to paper with him.
Seravalli had this to say:

“The Calgary Flames are in the process of putting the full court press on Gaudreau, the top pending free agent available this summer. Gaudreau, 28, is coming off an incredible contract year with new highs in goals (40), assists (75) and points (115) and could become one of the few career point-per-game players in NHL history to be open for bidding.
“Pedal down,” is how we’re told the Flames are approaching this exclusive negotiating window with Gaudreau, hoping to lock him up long-term with their built-in advantage of being the only team able to offer an eight-year contract. That advantage expires at 11:59 p.m. ET on July 12.”
-Frank Seravalli

If the Flames commit to Gaudreau, it could lead to some quality players hitting the trade or free agent market. The Flames have 11 expiring contracts among players on their main roster, including Matthew Tkachuk, Andrew Mangiapane, Calle Jarnkrok, Oliver Kylington, and others.
More from CanucksArmy:
Uncategorized
Recent articles from David Quadrelli