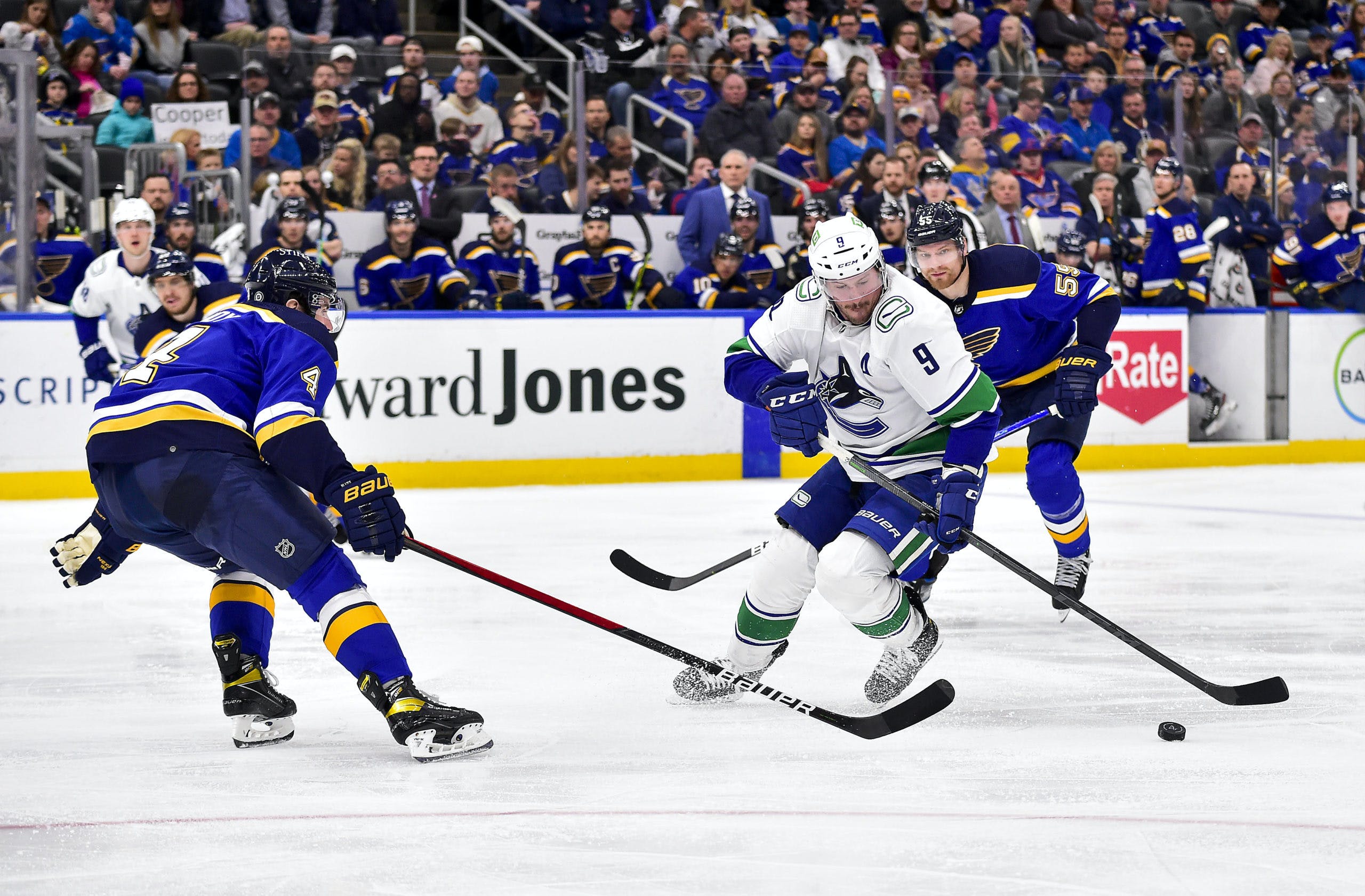 By Lachlan Irvine
9 months ago
J.T. Miller knows what it takes to make the playoffs. And he knew the effort his team had in last night’s 4-1 loss to the Blues wasn’t enough.
But rather than focus on his teammates’ mistakes during postgame availability, the Canucks’ leading scorer took responsibility for his own. Specifically, Miller pointed to his lack of coverage on Vladimir Tarasenko which led to an early third-period goal and a 3-0 nail in the coffin.
“I actually had a good play before that, got a good stick on him, and then I just puck watched for one second. I know he’s over there, I really do. I was just being stubborn,” Miller said.
“Buchnevich made a really nice pass over there, but all it takes is one second with good players. Watch the puck a little too long, and it’s in the back of the net.”
Miller’s line with Conor Garland and Tanner Pearson epitomized the struggles of the Canucks’ offence against St. Louis. While the trio combined for 15 shots on goal, they were routinely victimized on defence by the Blues; Miller and Pearson were each on the ice for three goals, while Garland was out on two.
Miller felt he didn’t have the urgency required on Monday, and took it upon himself to say so. “Definitely looking in the mirror for myself. I don’t think I brought it today, I just kind of wasn’t as engaged as I needed to be for some reason,” Miller said. “Maybe a little tired, but I definitely take some of the onus on myself to lead a little bit better.”
The uninspiring loss to the Blues puts a damper on an otherwise solid Central Division road trip for Vancouver. Even though the Canucks ended the four-game swing with five out of a possible eight points, every missed opportunity matters more when teams like Dallas and Nashville have multiple games in hand and a lead in the standings.
That fact wasn’t lost on Miller, either. “We need to win games right now, every time we lose it gets harder and harder. We had a good opportunity today to beat this team and then play them again two nights after they travel too. You never know what happens, so it’s disappointing,” Miller said.
“There’s no easy games. Everybody’s fighting for something right now, and physically guys around the league are going through a lot of the same stuff. So you gotta be mentally tough but whoever wants it more typically wins the game.”
For a team that’s been prone to stretches of unmotivated play, especially before the December coaching change, having star players like Miller hold themself to a higher standard is an important kind of accountability. Every winning locker room culture starts with the big names, and the Canucks have that element in a leadership group made up of the likes of Miller, Bo Horvat, Elias Pettersson and Thatcher Demko.
Miller and his teammates are already looking towards tomorrow night’s rematch with the Blues at Rogers Arena for a chance to make up the points lost on Monday. “We play them again in two days, so I’m glad we get to play them again,” Miller said. “I know we’re gonna put a better effort than we did.”
Uncategorized
Recent articles from Lachlan Irvine