By Faber
4 months ago
After a strong rookie year, Nils Höglander took a step back in his sophomore season.
His offensive production and ice time dropped in his second year and with the way that the Canucks roster is currently shaping out — Höglander could very easily find himself on the fourth line to begin the season.
There is clearly offensive skill in Höglander’s game and he continues to be a great creator of offence at five-on-five. The worry is that he was a rare case on the current roster that didn’t see a jump in his production after Bruce Boudreau took over for Travis Green behind the Canucks’ bench in December.
From the time of his NHL debut in 2020-21 to the day Green was fired, Höglander was second among Canucks in five-on-five points per 60. Höglander trailed only Conor Garland, who had 2.68 points per 60 minutes, albeit in a smaller sample size. In total, Höglander produced 1.89 points per 60 minutes in 81 games under Green, which is higher than J.T. Miller, Elias Pettersson, Brock Boeser and every other Canuck aside from Garland.
While Miller and Pettersson saw huge rises in their five-on-five production under Boudreau, Höglander’s production fell off a cliff — putting up only seven five-on-five points in 35 games. 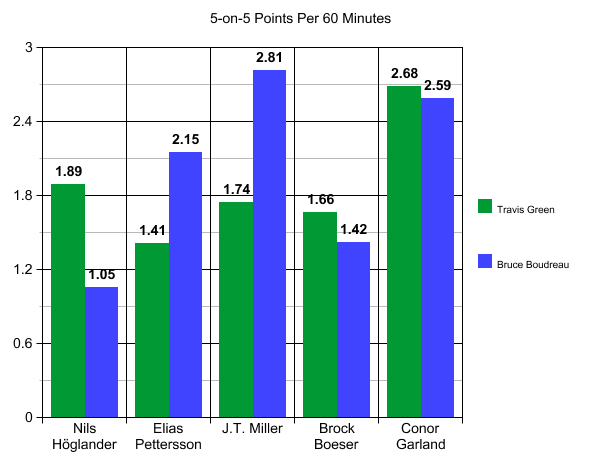 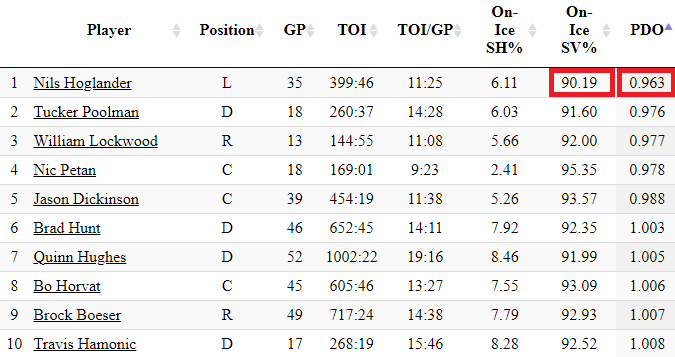 Stats from NaturalStatTrick
The goals scored against for Höglander are a two-sided story. There were some goals that directly resulted from his play but also there are some goals that he was on the ice for where it’s hard to put many faults on his play being the reason the puck ended up in the back of the net.
Oliver Ekman-Larsson making a blind spin-o-rama pass that sets up a two-on-one against isn’t Höglander’s fault.
Spencer Martin getting beat on the short-side can’t be put on Höglander…
There are definitely some occasions where Höglander deserves at least some of the blame for a goal against.
Blowing the zone early and not being there to support a pass from the corner isn’t a good look for him.
Losing possession in the neutral zone and then struggling in his own zone doesn’t look good for Höglander on this next goal, either.
So, as mentioned, there are two sides to the story of the goals against numbers that Höglander put up last season under Boudreau. Plays like the last two are a big reason why his ice time slipped under the new coach.
I’ll still make the argument that Nils Höglander is not as bad of a defender as some make him out to be.
He’s a 21-year-old who definitely has work to do in his own end but as for the effort level and stick work on the boards — for the most part — he is solid. Are there times when he cheats in his own zone? Absolutely, and that will need to be corrected if you expect to see him be a bottom-six contributor on Boudreau’s squad. I fall back on his aggressiveness being a big positive for his defensive play in the first two-thirds of the ice. His energy at least engages the opposition and forces them to make passes without having much time to think.
Now, that his play under Boudreau has been discussed, let’s talk about the crux of this article, and how Nils Höglander can get himself a top-nine spot in the lineup instead of being stuck on the fourth line.
When you look at some of the analytics of Höglander’s play under Boudreau, it may come as a bit of a shock to know that he led the entire team in scoring chances and expected goals per 60 minutes. There is no question that Höglander helps create offence at five-on-five and that skill should help him make a case to be in the top-nine for the Canucks. 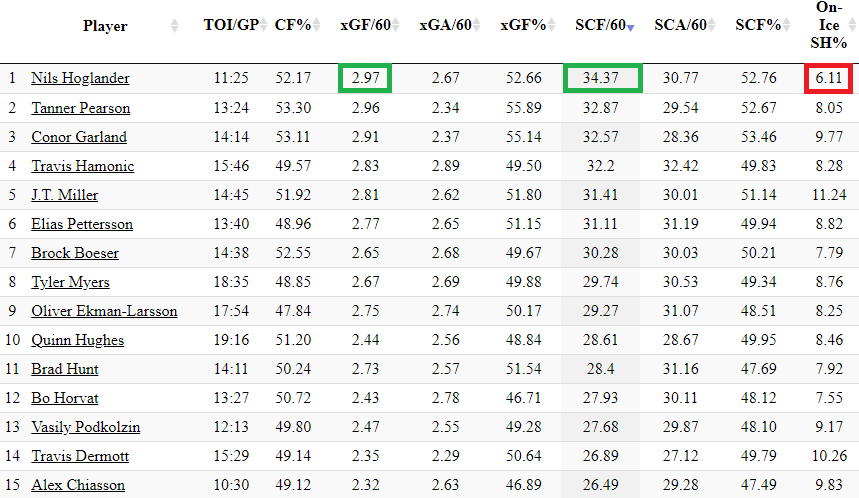 Stats from NaturalStatTrick
It should also be noted that out of the top 15 creators of scoring chances, Höglander had a team-worst 6.11% on-ice shooting percentage. This is where the eye test doesn’t look good for Höglander. The actual goal production didn’t match how many chances he was creating on the ice and at the end of the day, scoring chances don’t hit the scoresheet — you need the puck to hit the back of the net for it to count.
The way the team is currently constructed, it looks like they will be relying on their deep forward group to produce a lot of offence to balance out the weakness on the backend. This puts Höglander in a position where he will need to beat out a player like Andrey Kuzmenko for a top-nine position. Some will point at Tanner Pearson as the winger who could be bumped out of the top-nine and moved to the fourth line but when you actually look at the performance of Pearson under Boudreau — though he may not be as flashy as a Höglander or Vasily Podkolzin — Pearson gets the job done and holds strong analytic numbers when it comes to creating and defending against scoring chances.
When you look at the Pearson vs Höglander battle for a top-nine spot, offensively, it simply comes down to how much better Pearson is by including his teammates and working well with whoever he plays with. When isolated, Höglander actually shows better according to HockeyViz’s offensive five-on-five impact. It just seems like the eye test tells us that Pearson does a better job of working with his teammates in cycles, positioning, and finishing when playing in the offensive zone. 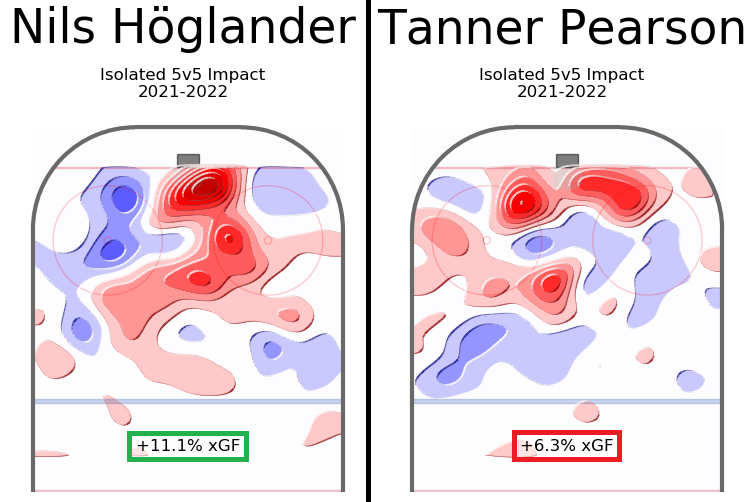 Isolated 5v5 Impact charts from HockeyViz
So the battle for a top-nine spot isn’t really between Pearson and Höglander, it’s actually between the young Swedish winger and the KHL’s second-highest scorer last season. We have pretty high expectations for Andrey Kuzmenko this coming season as his tape from the KHL is impressive but there will always be questions about his game transferring to the NHL until he proves that he can do it.
It will be damn tough for Kuzmenko to come in and create as many scoring chances as Höglander but will Kuzmenko be better at finishing those chances?
That’s a real possibility.
Our expectation is that Höglander ends up beginning the season on the fourth line but is used as the first player to be mixed into the top-nine when there is an injury or a player is slumping. There will be a lot of pressure for the top-nine to be scoring goals and being defensively responsible. That being said, we don’t see any of Brock Boeser, J.T. Miller, Elias Pettersson, Bo Horvat, Ilya Mikheyev, Vasily Podkolzin, Tanner Pearson or Conor Garland being moved down to the fourth line.
The only question we have in the top-nine is if it will be Kuzmenko or Höglander. We suspect that with the hype as well as skill shown by Kuzmenko — he will begin the season in the top nine. This isn’t ideal for Höglander but at the same time, Boudreau knows what Höglander can do offensively and if a player in his top-nine isn’t going that night, we expect to see Höglander get some chances to be a spark plug.
It’s going to be an uphill battle for Höglander to play with some of the top offensive players but he should be able to showcase his ability to be an offensive creator in a role where he will see a lot of weak competition. If used in a fourth-line role, Höglander will face a lot of the opposition’s fourth lines and bottom pairing. The hope would be that he can find some chemistry with Curtis Lazar and add depth scoring to the team as he patiently waits for a chance to be back in a top-nine role.
The Canucks have options on their fourth line and we expect to see Dakota Joshua be the third player who joins Höglander and Lazar. If they want to try and build some offence on that fourth line, keep an eye out for Sheldon Dries or Phil Di Giuseppe to be names of note. Jason Dickinson is still in the mix but with how he played last season, it wouldn’t shock anybody to see him be the 13th forward on this team.
Höglander finds himself on the fence of the top nine. He will surely get a chance to play in the top-nine at some point this season but coming out the gate in that spot is going to be very tough without an injury or Kuzmenko showing extremely poorly in training camp and preseason.
We’re expecting a bounce-back year from Höglander, who finished last season on injured reserve with a groin injury and had surgery in the middle of April. We’ve seen how this kid works and have talked to his SHL coaches in Rögle, who believe that Höglander develops well when he is focused on one specific part of his game. This season will be the time for the 21-year-old to improve his defensive play and if he can clean up what he does in his own zone, there’s no reason why Höglander can’t be a top-nine forward for the Canucks over the next 6-8 years.
As for now, a top-nine spot is in reach but we don’t expect to see it on opening night without a trade or an injury.
Expectations have been lowered on Höglander after his sophomore season but we still believe there’s a lot of potential in the skilled winger’s game.
Don’t forget that he’s still only 21 years old. Let’s see what this kid can do in year three.