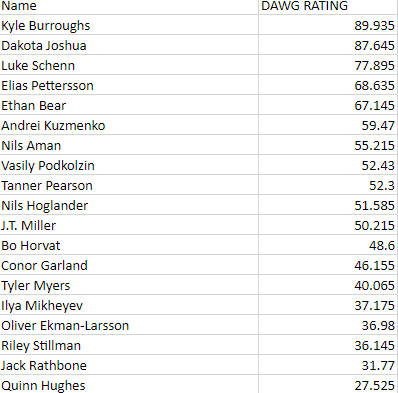 Our bottom DAWGs consist of Riley Stillman, Jack Rathbone, and Quinn Hughes.
Now, the DAWG formula doesn’t measure how good a player is at making an impact in a game. The DAWG formula measures the amount of DAWG that a player has in them. This will require them to be playing physically, sacrificing themselves for the team, setting up teammates, and just working hard in the dirty areas in general.
Don’t be mad that Hughes is the bottom DAWG. Because he is a finesse defenceman, he doesn’t need to be a DAWG to be successful.
Bear has shown well in his limited time as a Canuck, Pettersson continues to impress us with his DAWG rating because he doesn’t necessarily fit in the traditional physical player role, and Joshua is creating a lot of opportunities for his linemates while also being a leading man in the physicality department.
This is DAWG. This is the future.
With the way the season has gone for the Canucks so far, this team looks like it will have a chance to land Connor Bedard but it’s still more about retooling and adding assets for pieces that may not be here for the Canucks’ true competitive window.
That being said, the window is clearly not this season and there are some players who will see their contracts expire in the next two seasons who should absolutely be shopped in the coming months.
To answer your question, and I assume it’s a bit tongue in cheek, this team will regress back to getting some wins unless this habit of blowing multi-goal leads is a true problem that is in their DNA. Either case, I don’t believe this roster, with this goalie, has the best shot at finishing worst in the league. The Arizona Coyotes are literally built to finish last in the NHL, which makes it really sad to look at the standings and see that the Yotes are ahead of the Canucks.
Who knows, maybe this team is actually much worse than their roster even indicates. This season’s internal debate of tank for Bedard vs push for a wild card spot is heavily leaning in one direction and it would be absolutely franchise-altering to see them land this North Vancouver stud from the Regina Pats.
American Thanksgiving is just around the corner and you have to believe that after making some small trades, the next step is going to be a major shake-up.
If I had to guess, I’d say that J.T. Miller and Andrei Kuzmenko are on the team next season.
I don’t think Kuzmenko is going to keep the 48-goal pace that he is currently setting but also see that his fit on the Canucks’ first power play unit is going to set him up to score a lot of easy goals this season. On top of that, he is working well with Pettersson at five-on-five and his next contract is likely to be something in the two-to-three-year range with the average annual value likely being determined with his totals at the end of the season instead of just what he’s done in the first 12 games.
Maybe the Canucks want to get ahead of this and lock down Kuzmenko during the season but he would also be an interesting trade chip at the deadline if he continues to score near his current rate.
I’m with Canucks Reddit in agreeing that I’d love to see Kuzmenko be a Canuck for a long time. He is fitting in well so far and is great fun during interviews.
Miller’s contract is going to be extremely difficult to move on from and though I do believe that there has to be a team or two who would be interested, the cap hit and other circumstances make me believe he will be on this team next year.
As for Bo Horvat, he is trending towards making his agent a very happy and even richer man.
Horvat would be a huge addition to a playoff-bound team and has to be looking at this free-agent class and thinking that he has a chance to be the leading dog in the centre department. I wouldn’t be shocked if he signs an extension with the Canucks, but I’m also not betting that he will either. It’s very much a 50-50 situation in my eyes if he is on this team next season.
Buying on Podkolzin, even though his market is low.
Holding on to Danila Klimovich because he doesn’t have value and should be a real test of new AHL head coach Jeremy Colliton.
Buying on Jonathan Lekkerimäki because I believe he is going to show a lot better at the World Juniors this year.
Holding but listening to ideas on selling on Höglander because he needs to fine-tune some scoring woes and then will be an effective middle-six winger. Teams value what he does with his work ethic and shows with his analytics, and he could be a piece in a trade that helps fetch a young defenceman.
Buying on Rathbone, and giving him more opportunity because he deserves it and is one of the players who really hasn’t yet been given a chance to have a run with this team and see what he does as an everyday NHL player. As I mentioned earlier, it’s mind-boggling how this kid only has 21 NHL games under his belt.
Well, that wraps up another Monday Mailbag here at CanucksArmy.
Be sure to use the #MM to ask a question for next week if you want to ask away in the comments section.
See you all next Monday!
Editorials
Recent articles from Faber