By David Quadrelli
1 year ago
Another week, another mailbag. Let’s see what you wonderful people asked this week!
This is a question that I’ve been asked before, that to be quite honest, I’ve avoided answering.
I’ve now talked to more people who know more than I do about Emil Pettersson — the brother of Elias — and watch far more SHL hockey than I do.
The popular opinion from all of them has been that the Canucks — given their current cap situation and projected roster — cannot take a chance on Emil, especially at the 3C position, a position the Canucks desperately need to fill with a capable body.
This isn’t to come out and say Emil can’t play and has no shot at success in the NHL, but it didn’t work before, and the reality is some players who light it up in Europe sometimes struggle to transition to the North American game.
”I could maybe see him as a useful 13th forward on an NHL team, but not much more,” one source told me.
Emil very well could be a diamond in the rough for a team that takes a flyer on him this offseason, but to sign him with the hopes that he can competently fill the hole at the 3C position is far too wishful thinking.
It’s just not a move or a signing that makes sense for the Canucks to make at this point in time.
If what J.T. Miller said is true — that he wants to come back and is fully committed to helping the Canucks win — there is no part of me that thinks trading Miller is a good idea.
When one considers what he brings to a lineup — what he brings to the lotto line — and how he performed in the playoffs last year, it’s hard to think of many other players in the league who can give you what Miller gives.
He’s Travis Green’s guy and is trusted to play in all situations. There’s likely not much more that would piss off Green more than if the Canucks traded Miller for some draft picks in hope that maybe one of them can become a similar impact player to Miller.
Until he asks out, and it’s safe to assume he would if the Canucks have another stinker of a season next year, the club would be wise to keep Miller around.
Ah yes, the offer sheet.
It’s in the CBA, and it’s a tool that can be used by GMs, so this is a valid question.
First off, Quinn Hughes isn’t offer sheet eligible because he signed his entry-level contract at the tail end of the 2018-19 season, so the odds of a team offer sheeting him is literally zero.
As for Pettersson, the Canucks find themselves in somewhat of a vulnerable position in that regard. It’s no secret that the Canucks’ cap situation is less than ideal, and many have floated the idea of the Seattle Kraken getting the Battle of the Border rivalry started off with a bang by offer sheeting the Canucks’ star forward.
If the Kraken, or any other club for that matter, were to use the seldom-used tool to put added pressure on the Canucks, here’s what they would potentially have to give Vancouver as compensation: 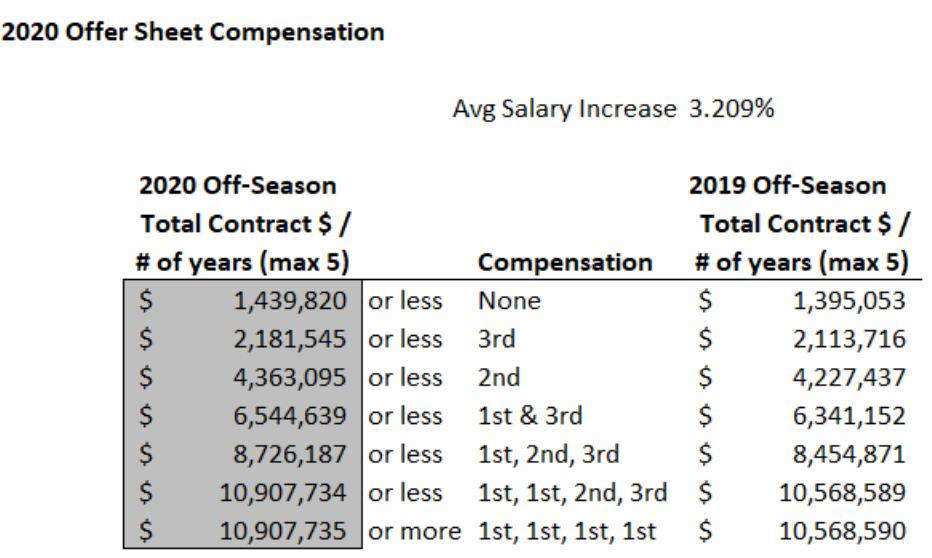 This is all to say that it’s unlikely the Canucks have to deal with a situation like this.
If a team were to offer sheet Pettersson, they’re almost certainly looking at the deal being below $8,726,187, which the Canucks would find a way to match.
Things get more interesting if it’s above that number, or even above $10,907,734, but again, this is extremely unlikely, especially when you consider Pettersson only played half of last season and still has some question marks surrounding his wrist injury.
I put the odds of a Pettersson offer sheet at about 15 percent.
I’m going to go with McDavid here. As Taj1944 on Twitter would say, bring him home.
This was the joke of the week this week on Twitter and in the CanucksArmy staff group chat.
It pains me to say it, but our very own Chris Faber decided to put mustard on watermelon, for personal consumption.
Not only that, but he actually liked it, and went in for a second bite:
We at CanucksArmy reacted swiftly and brought down the sweet hammer of justice on Faber, and put out the following statement:
Because he is a repeat offender — he once put sour cream on lasagna — Faber’s mandatory culinary training courses will now be two weeks long, as opposed to the one week he was given before.
Alright. Next question.
Vasily Podkolzin officially signed his ELC yesterday, and if you’ve read anything about him on this site in the past, you’d know that we are very, very high on the Canucks’ top prospect.
Podkolzin’s KHL point totals are far from eye-catching due to his bewildering deployment under SKA head coach Valeri Bragin, but he has the work ethic and drive that’s flat out seldom seen in young prospects.
At worst, he’ll be a stronger and more skilled version of Tyler Motte in his first season. Somebody who can win puck battles, kill penalties, and be defensively sound while chipping in with offence here and there.
My opinion? Podkolzin will be given top six minutes out of training camp and won’t look back — similar to how Green and his staff chose to deploy rookie Nils Höglander this past season.
He’s going to be able to play the matchup minutes required of both Bo Horvat and Elias Pettersson’s lines, but will likely see most of his time with Horvat until the lotto line falters.
In my opinion, he’s going to be an elite play driver and set up his teammates for grade-A scoring chances, just like he has at every other level.
Only now, he’ll be playing with NHL-caliber players, who can bury these chances:
Similar to Höglander, Podkolzin is going to be a player who greatly benefits from playing with NHL caliber players. In the SHL, Höglander played third line minutes, and didn’t put up exceptional numbers.
Once arriving to the Canucks and being put with better players, however, Höglander was able to excel. He thinks the game at NHL level, and so does Podkolzin.
I fully expect Podkolzin to come in next season and have an even greater impact than Höglander had in his rookie season, and quite frankly, I’ll be shocked if I’m wrong.
That’s all for this week, folks! To ask a question in a future mailbag, be sure to follow me on Twitter and keep an eye out for the weekly mailbag tweet!
Uncategorized
Recent articles from David Quadrelli