Monday Mailbag: Looking forward to more Lekkerimäki, Kuzmenko’s spot in the Canucks’ lineup, and no centre for the second power play unit

By Faber
2 months ago
Another week has passed and we are back with another Monday Mailbag here at CanucksArmy.
As the Mondays continue to roll along, it brings us another week closer to training camp — which will take place in Whistler on September 23rd and 24th.
Until then, we continue to follow overseas play and chat about potential lineups for the Canucks.
We have good questions this week and for that, I thank you for another good crop as we roll through the dog days of the hockey year.
So, without wasting any more words, let’s rip open that sweet sweet mailbag and see what the wonderful people of Twitter and our comments section asked this week!

We will kick things off with a J.T. Miller question because why the heck not? There were nearly a dozen questions regarding Miller trade speculation and I do find this one interesting.
Simply put, trading Miller right now likely sees the receiving team having an extension in place for Miller. Though the simple thought may be that more teams would be interested in Miller now compared to how many will be at the deadline — I disagree.
Every team in a playoff spot looking to add at the deadline would be interested in Miller at his cap-hit.
More teams will be able to add Miller as a rental compared to teams that are willing to trade assets for him now and invest in the players long-term.
It’s why I’ve consistently believed that moving Miller before last year’s deadline was the time when he would have garnered the biggest trade return. He is more valuable as a two-year rental at his $5,250,000 cap-hit than he is as a trade-and-sign piece.
This obviously makes it hard because if the Canucks are in the hunt, they have a serious decision to make at the deadline. This is the biggest decision that the new management group has to make in the early stages of their tenure and Jim Rutherford has been clear that the team will either re-sign him if it works for the team or get the best trade return possible if a deal cannot be reached.
It sure will be interesting if Miller is a point-per-game player at the deadline with the Canucks in the fight for the playoffs.
This clip will likely live on for a while if things work out poorly.
Alright, no more Miller questions in this week’s mailbag.
The 20-year-old Russian centre has a two-year contract in the KHL.
The earliest I’d expect to see him in the AHL would be the 2023-24 season. It was nice to see him at Canucks development camp this summer and we will hopefully see him there over the next two summers.
We will see if he continues to develop well in the KHL. Zlodeyev has been good for Spartak in the preseason.
I’d doubt that Andrey Kuzmenko can show poorly enough to not at least be in the Canucks’ top-nine forward group. Bruce Boudreau helped in the push to land Kuzmenko and the Canucks’ head coach has done a good job with Russians during his time in the NHL.
You should expect to see Kuzmenko getting time on one of the power play units because his power play prowess is one of his best traits.
Kuzmenko should start the season as a top-nine and power play contributor but if he cannot produce in the NHL, the Canucks will have to try other options. They have Nils Höglander eagerly awaiting another opportunity with Boudreau and he is going to work as hard as he can to get back into the Canucks’ top nine.
Over the years, I’ve always thought that a second unit power play doesn’t really need a centre. You’re almost always going to be able to get a centre out there with the unit if you need it but unless you ice the puck, you’ll never be caught on the ice without a centre. Even if that’s the case, that will happen maybe once or twice in an entire season.
You want to have your best power play units possible and with Miller, Elias Pettersson, and Bo Horvat being used on the first unit, it’s fine to have a second unit without a centre.
Your question has two defencemen on the unit and I’d go with four forwards and one defenceman but you don’t need one of your forwards to be a centre on the second power play unit.
Personally, I’d go with Conor Garland, Andrey Kuzmenko, Vasily Podkolzin, Nils Höglander, and one of Oliver Ekman-Larson or Jack Rathbone.
You could also easily slot Tanner Pearson or Ilya Mikheyev in there if you want a different look.
The floor for Jonathan Myrenberg is that he never comes to North America and is a top-four SHL defenceman.
As for a ceiling, I’d say that Myrenberg’s size, skill, skating and right-handedness all set his ceiling as a bottom-pairing NHL defenceman.
At only 19 years old, there is still a long road before Myrenberg even comes over to North America. I’d like to see him play in the SHL for two years after this season in the Allsvenskan. Seeing Myrenberg in the AHL for the 2023-24 season would be a huge win for the Canucks and their scouting staff. 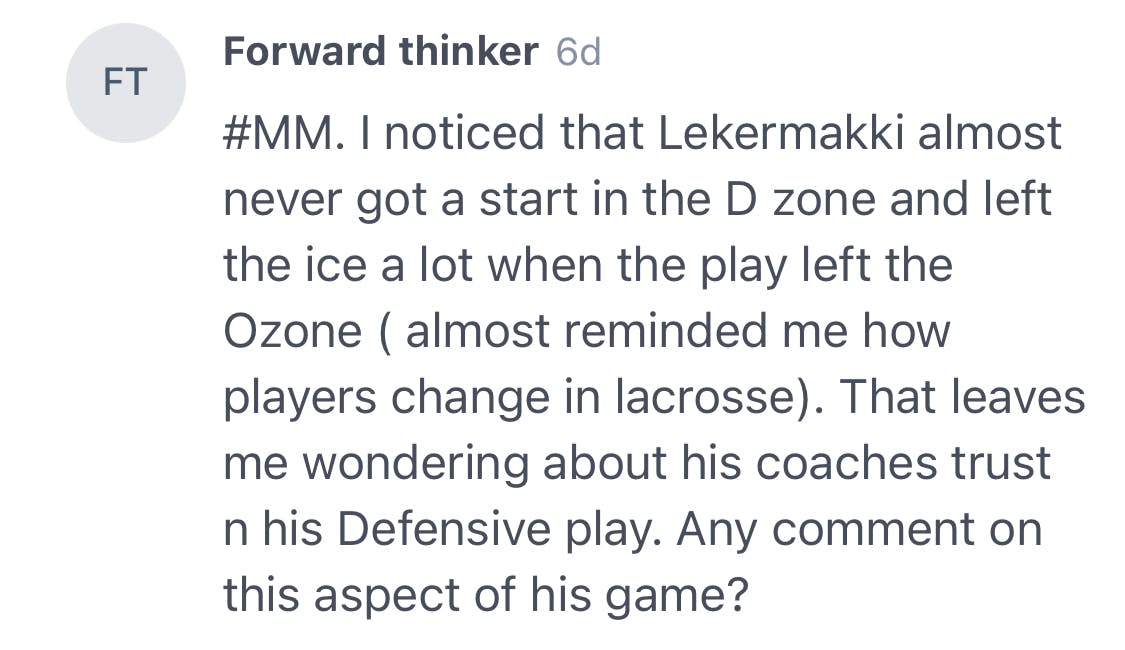 I’d say that you’re probably on to something. He was the youngest player on the team and I’ve noticed that Swedish coaches do lean on experience in the defensive zone.
Young players typically try to keep their shifts very short as well. Höglander’s early SHL seasons or Podkolzin’s KHL time are good examples of this.
We will see much more ice time for Jonathan Lekkerimäki in the next two World Juniors.
His effort and thought process in the defensive zone is something that we like in his game. Lekkerimäki uses his offensive hockey smarts to anticipate in the defensive zone and gets his stick on a lot of shot attempts. He will be much better this December at the 2023 WJC.
We will likely see a name or two added to this team on a professional tryout.
I thought I’d look at a few potential PTO candidates, and let the comments section give me their thoughts.
James Neal, W, 6’2”, 220 lbs, 34 years old.
Derick Brassard, C/W, 6’1”, 202 lbs, 34 years old.
Carter Rowney, C/RW, 6’1”, 208 lbs, 33 years old.
Michael Dal Colle, W, 6’3”, 201 lbs, 26 years old.
Danny DeKeyser, LD, 6’3”, 183 lbs, 32 years old.
This December will be a much better World Junior Championships for Jonathan Lekkerimäki.
I’d expect to see him on the first power play unit, which will help his point totals.
It’s not difficult to imagine Lekkerimäki being a point-per-game player in the upcoming tournament. I’ll guess that he puts up eight points in six games with Sweden.
None of the four Swedes will be at the Young Starts tournament in Penticton because they will be playing their SHL or Allsvenskan games.
I’m looking at Danila Klimovich, Arshdeep Baines, Tristen Nielsen, and Connor Lockhart at the Young Stars tournament. I’m also happy to report that we will be in Penticton covering the tournament in mid-September.
That wraps it up for this week’s Monday Mailbag. Thanks to everyone who sent in a question this week. Be sure to keep an eye on my Twitter account on Sundays when I send out my call for questions.
You may also ask a question in the comments section of this article. Be sure to use the “#MM” hashtag at the start of your question.
Content
Recent articles from Faber