By Faber
5 months ago
Well, we’re hoping that this is the final Monday Mailbag that we have to discuss if KHL free agent Andrei Kuzmenko will sign with the Canucks. We are expecting to have an answer late this week or it may drag on into early next week. That being said, we’re happy to know that this deal will soon be done.
The NHL draft is now only 17 days away, the Stanley Cup Final series is two games in and the AHL final just kicked off last night. Could you imagine if the Abbotsford Canucks lived up to and exceeded expectations on their way to the Calder Cup final? That would have been so much fun to cover. Let’s hope for a better playoff run from the AHL squad next season.
Last week, I noted that some of the commenters who don’t use Twitter wanted to get into the action and I found two questions from the comments section to include in this week’s mailbag. Let’s do the same thing as last week and try to make it a usual thing here at CanucksArmy. If you want to ask a question for next week’s mailbag, simply start your comment with #MM and then ask your question in the comments. We’d love to include you with the usual Twitter folk.
That being said, let’s start with a question from last week’s comments section!
No more wasting words, let’s go! 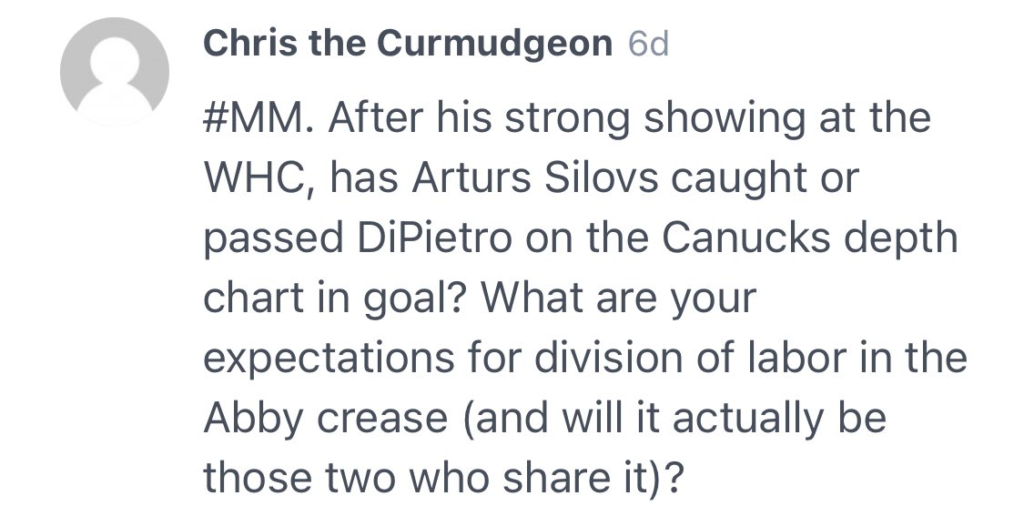 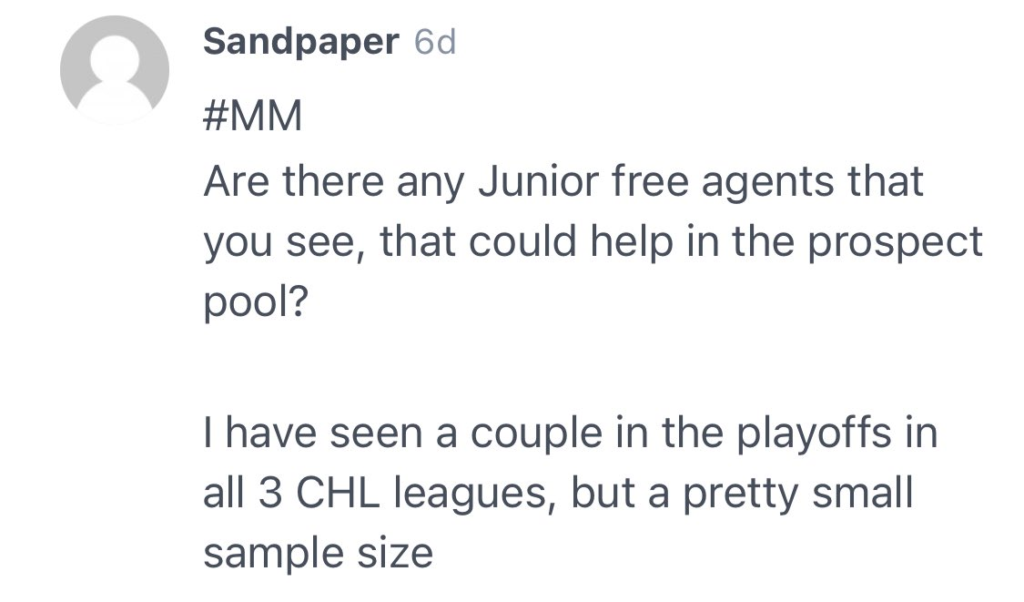 Another question from the comments section, let’s look at some names who could help the prospect pool or come in and make an impact with Abbotsford next season.
First off, I hope the Canucks sign two more local kids from the Vancouver Giants.
At forward, Adam Hall is a name I like from the WHL. He’s 6’2″, physical, and is constantly praised for his hockey sense. There is definitely some work to do with his foot speed but you can’t teach size and hockey IQ — Hall has both of those and is free to acquire.
On defence, the Giants have another big body to take a look at in Alex Cotton. He’s a local kid who played his minor hockey in Langley and is a 6’2″, right-shot defenceman from the WHL. I know there’s a crowd in the Facebook comments who will love this kid. Cotton was not given an entry-level contract from the Detroit Red Wings after being drafted in the fifth round of the 2020 NHL Entry Draft. He’s a free add and provides offence from the back end to go along with his big body and physical play. He was an assistant captain with the Lethbridge Hurricanes in the WHL before being traded to the Vancouver Giants last year.
Another big body, right-shot defenceman from the WHL to look at is Simon Kubicek. He was the WHL’s league leader in penalty minutes but still had 41 points in 68 games. He’s a tough piece of business and could be worth a swing if you’re looking for a guy to add to your AHL depth.
I haven’t done enough research into the QMJHL or OHL to give a true review but I’d expect the Canucks to try and begin to fill their farm with local talent like they did last season with Chase Wouter, Alex Kannok Leipert, and Tristen Nielsen.
We really like Lian Bichsel. As a 6’5″ defenceman, he impresses us with his skating and puck-carrying ability. It could end up being a stretch to draft Bichsel as high as 15. In our eyes, if Kasper and the “top D” are gone, we prefer Owen Pickering in the second wave of defencemen. This is assuming that Denton Mateychuk, David Jiricek, Simon Nemec, and Pavel Mintyukov are all gone.
There’s a strong argument to be made for Kevin Korchinski as well. He had a heck of a run with the Seattle Thunderbirds in the WHL playoffs and is probably in the conversation at 15 more than Bichsel.
The way that we see the Canucks drafting Bichsel would be in a trade-down situation. Honestly, you have to feel pretty good if the Canucks come out of 15th with Marco Kasper, Owen Pickering, Kevin Korchinski, Brad Lambert, or Jonathan Lakkerimaki.
You might feel even better if the Canucks trade down, grab a second-round pick and come out of the first round with one of Lian Bichsel, Jiri Kulich, Rutger McGroarty, or Isaac Howard.
After being a standout camp star last year, Will Lockwood found himself beginning the season in the AHL before getting a call-up to the NHL, where he had a 13-game stint with the Vancouver Canucks. Unfortunately for Lockwood, he was unable to put up a point in his 13 games last season — that doesn’t bode well for Lockwood as he looks to make the NHL roster out of camp this fall.
Lockwood played well defensively in his role but didn’t have tough competition and was unable to bring any offence to his bottom-six role.

Lockwood has shown good progress in the AHL over the past two years and this past season he became one of Abbotsford’s best penalty-killers.
He has the speed and physical play to fit into an NHL bottom-six but the question is going to be if he can bring anything more than just being a pesky forechecker. Lockwood looks like he can be used on the penalty kill but with Boudreau deciding to use some of his top players on the penalty kill, Lockwood may not fit into the roster with as much value as we believed he might have in the past.
For years, he has looked like the replacement for Tyler Motte’s spot in the lineup and we’re at the point now where it has to be go-time for Lockwood. He turned 24 years old today and though his progression is promising, he is now at a crucial point in his pro career. He clearly fits in the AHL as a middle-six winger who absolutely flies around the ice. His hands are good enough to produce in the AHL but his shot and stick-handling is going to need to be better than it was last season if he’s going to be a consistent NHLer this fall.
All that being said, we liked some of what we saw in his small NHL stint last season. Though he only played 147 minutes of ice time, he was the team leader in hits per minute played as he threw even more hits than Luke Schenn, the hit king himself. Lockwood threw at least two hits in each of his 13 games last year. This is the style of play that Lockwood knows he needs to do to be able to make it in the NHL.
We do expect to see Lockwood make the NHL out of camp. As long as he comes in and executes like he did last year, he will earn a shot to be an NHLer. Lockwood’s energy will be useful on the Canucks’ fourth line and if he is able to bring a bit of offence, he will show that he belongs in this league. The ceiling for Lockwood is to be what Motte was for the Canucks but his floor is already at the point where Canucks fans can feel confident about calling a player up from the AHL. There have been a handful of years where there is nothing in the AHL to be excited about and if Lockwood is sent to the AHL after camp, there should be excitement for when he finds himself getting the call to the big club.
He’s at the point where he’s earned a shot at the NHL. Boudreau has seen him play in the NHL and will get to see Lockwood (hopefully) shine at training camp.
It’s time for Lockwood to make the jump.
Let’s see if he can do it.
Well, that wraps up another Monday Mailbag article. Thanks to everyone for their questions as usual and if you don’t have Twitter and want to get a question in for next week’s article, simply begin your comment with #MM and ask a question. We will include some questions from the comments section until they begin to disappear.
See you all next week, and hey, have you heard anything about Kuzmenko?
Uncategorized
Recent articles from Faber