By Faber
4 months ago
We are back with another Monday Mailbag here at CanucksArmy!
The Canucks’ offseason is starting to slow down as the team has taken care of free agent business, signed Brock Boeser, and continue to build their depth in Abbotsford. The defence still hasn’t seen an improvement and for those who want to see this team be a competitor in the next few years — we need to see some form of positive change to the backend.
There are some tradeable pieces and with players like Tanner Pearson or Nils Höglander currently looking like they could be fourth-line players. There has to be some value there but the team may look to move a player like Garland instead of Höglander simply due to age.
We have to believe that the offseason work is not done and heck, if we want to talk about a trade for you know who again this week, maybe the biggest move of the offseason is just on the horizon. I’m taking another week off of the J.T. Miller trade talk. I’m beginning to feel that Miller will be on the roster for day one of camp. There are so many rumours that have amounted to nothing, it’s going to take some action for me to go down that Miller road.
All that being said, we’ve got mailbag questions to answer and I’m always happy to give my mediocre answers to the great questions from the amazing folk on Twitter, as well as the best of the best that come from our commenters who use the #MM in the comments section.
So, let’s not waste any more words, let’s rip open the mailbag and see what we have this week!
There are a handful of names that you could go with in this spot. From how general manager Patrik Allvin spoke about him at the free agency day media availability, Dakota Joshua is a strong candidate. I’m also curious to see what head coach Bruce Boudreau thinks about Nils Åman, as his combination of size and speed is definitely intriguing.
Those names being said, I’m going to say that my biggest dark horse to make the Vancouver Canucks’ opening night roster is Phil Di Giuseppe.
Di Giuseppe didn’t even get a taste of the NHL last season but was a workhorse in the AHL with Abbotsford. He isn’t small, coming in at around 6’1″, and shows a good combination of skill and grit as well as being a contributor on the penalty kill.
I’d imagine that he is very motivated after last season and likely had some good conversations about where he stands in the organization with the new management group along with the assistant to the general manager, Ryan Johnson. Di Giuseppe will need a heck of a camp to beat out Joshua, Will Lockwood, Jason Dickinson, and more for a shot at that fourth-line NHL job.

Both situations are different so let’s start with Jonathan Lekkerimäki.
Lekkerimäki is coming off an SHL season where he played power play time, saw a handful of games in the top-six, and learned how to play against men in the top Swedish league.
Though he learned a lot, his SHL club was still demoted and that means that some of the veterans will try to move teams so that they can stay in the SHL or look elsewhere to stay out of the Allsvenskan. Lekkerimäki’s team Djurgärdens has lost their captain, their leading scorer to the Swiss League, lost their second-leading scorer to North America, as well as their fourth leading scorer heading to Germany’s top league.
All that being said, Lekkerimäki and his two fellow 2022 first-round draft picks Liam Öhgren and Noah Östlund will be together in the Allsvenskan and Allvin has even hinted that they could be playing together.
The trio of teenagers could end up being a top-six line together who get a ton of power play time.
The Allsvenskan has five or six very competitive teams and those big matchups should challenge Lekkerimäki at a similar level to the SHL. The good news is that he should be able to gain confidence by feasting on the weaker teams. It would be a massive chip on his shoulder if he was one of the leading forces in getting his team back into the SHL next season and the feeling is that he will be given much more ice time after seeing movement throughout the roster.
The players will be weaker at times but that could be a good thing for the smaller-bodied Lekkerimäki.
As for right-shot defenceman Jonathan Myrenberg, he is being loaned to the Allsvenskan because he is not being guaranteed time in the SHL.
From speaking with Mikael Samuelsson, he mentioned that it’s not about production in the 2022-23 season for Myrenberg. The goal for Myrenberg is that he is developed correctly to give him the best chance of being a contributor at the NHL level one day.
There’s no rush for Myrenberg, and the Allsvenskan is where he is going to get the most ice time while also being challenged.
This is where a development staff member like Samuelsson is going to be huge for the prospect. We hope to see Samuelsson involved in how Myrenberg is improving his skills while also feeling comfortable as an everyday player.
At just 19 years old, playing top-four minutes and producing some offence would equate to a big year for Myrenberg.
We will surely be up for those 7 am Allsvenskan games of both Lekkerimäki and Myrenberg.
Yeah, I was on a houseboat on Sproat Lake for the past four days and lost my voice to a lot of different songs.
The number one song that got the guys going was Freight Train by Alan Jackson.
It instantly got the place rocking.
The latest I’ve heard is that he will be assessed at training camp once he is able to skate with the group and I could see Brady Keeper being a huge boost to Abbotsford this season.
Depending on how well he has recovered from a broken leg at last year’s camp, he could challenge Noah Juulsen as the top right-shot defenceman in the AHL.
We will begin to talk about his chances of registering NHL games once we see him play in the AHL. We’re really hoping for a healthy season for Keeper.
They are both big, strong and can skate. Those types of players typically thrive in world junior competitions.
I like that both players focus hard on being strong in their own zone but use their skating strength to add to the offence. I’d love to see these two play together and they are both on Sweden’s roster for camp.
This will be a fun story to follow.
Jett Woo, AHL, 21 years old, 6’0, 205 lbs.
Filip Johansson, (NHL, AHL, or most likely SHL), 22 years old, 6’1″, 176 lbs.
Jonathan Myrenberg, Allsvenskan, 19 years old, 6’2″, 205 lbs.
There’s also Kyle Burroughs, Noah Juulsen, Luke Schenn, and Brady Keeper. I just wouldn’t qualify them as prospects… 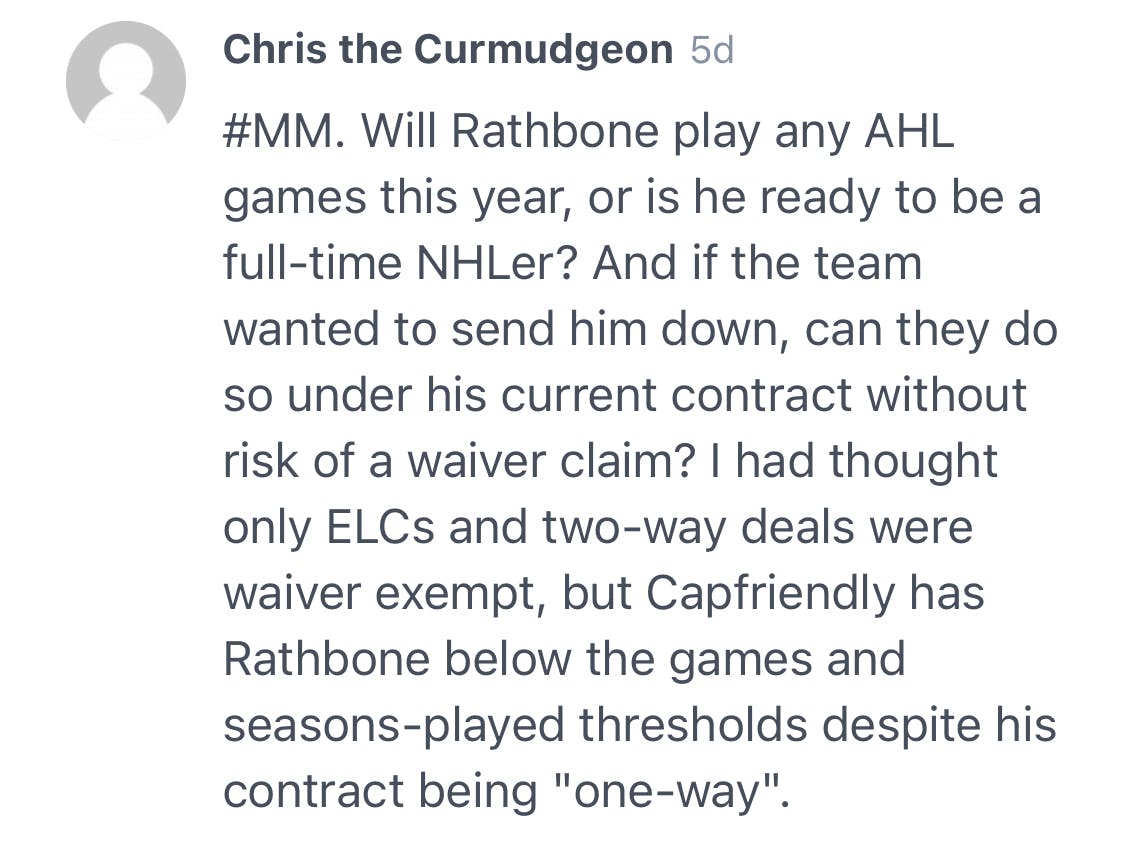 It’s not going to be an easy task with Quinn Hughes, Oliver Ekman-Larsson, and Travis Dermott all fighting for a spot in the NHL as a left-side defenceman. Jack Rathbone could very easily be on the outside looking in and that could result in him starting the year in the AHL.
He cannot be claimed off of waivers due to a combination of his professional experience and age.
Aku Koskenvuo will most likely play at least two more seasons before turning pro. He is still a teenager and going into his first year in North America as he joins Harvard this fall. He is probably 3-5 years away from even getting a sniff of the NHL but we love the potential that is dripping off of him.
The goalie community is very high on the combination of goalie coach Ian Clark and the raw talent in Koskenvuo’s game. Let’s see how he looks against NCAA competition in a Harvard hockey environment that is known for defensive hockey.
As for Arturs Silovs, the goal for him should be to push for the starting role in the AHL this season as a 21-year-old. If we see a big year from Silovs, the NHL could be an option by the time he is 23-24 years old as a backup.
It would take a ridiculous jump in talent for either Silovs or Koskenvuo to challenge Thatcher Demko for the starting role at the conclusion of his current contract. Goalies are weird though.
Well, that wraps up another Monday Mailbag here at CanucksArmy. Be sure to comment with the #MM to try and be featured in next Monday’s article. Thanks as always for the excellent questions — we wouldn’t be able to do this without you.
Enjoy some Alan Jackson this week and we will see you next Monday!
Uncategorized
Recent articles from Faber