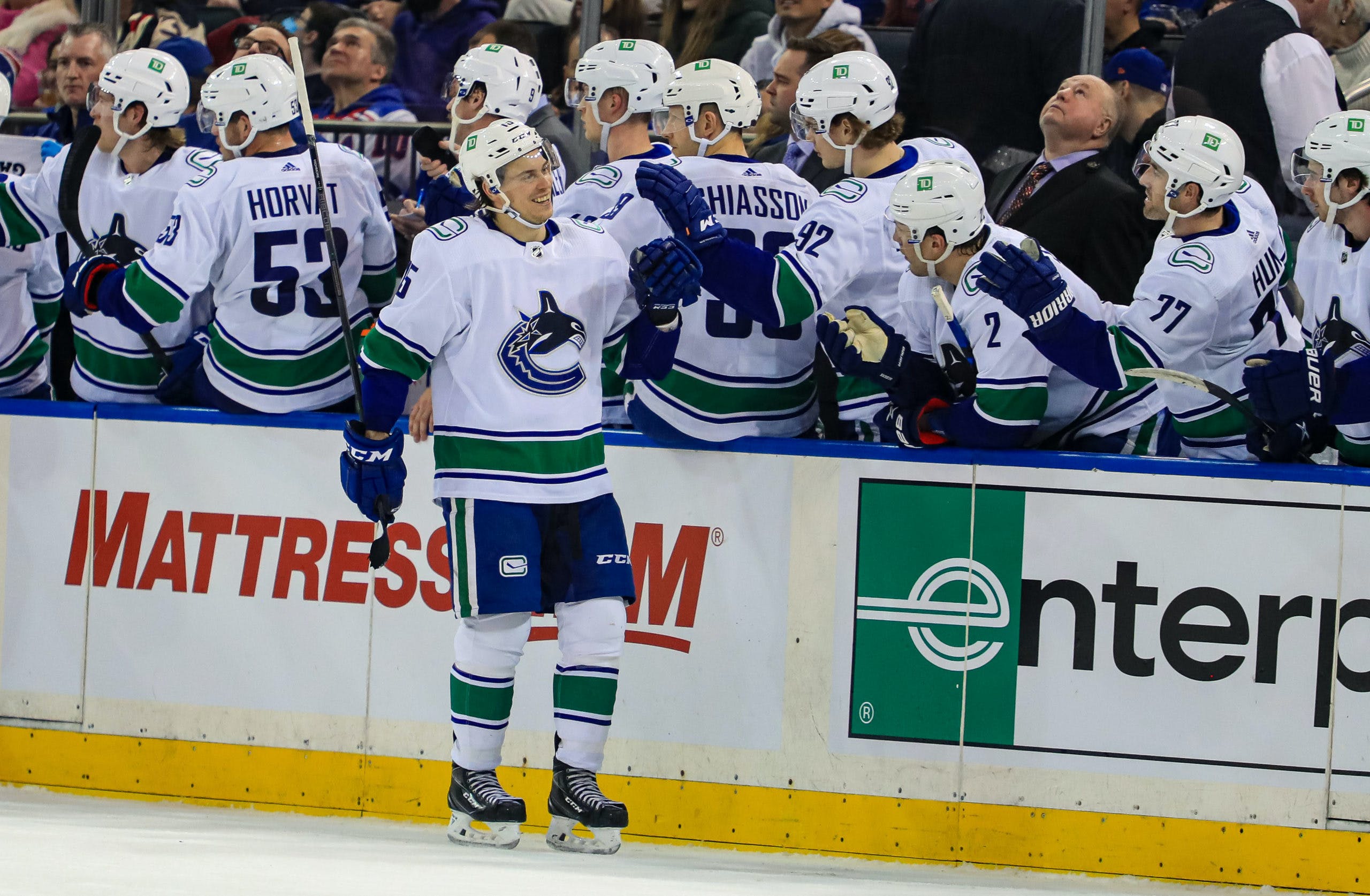 By Colton Davies
5 months ago
Matthew Highmore’s entire career could best be described as a rollercoaster.
The Halifax, Nova Scotia product provides the Canucks with a unique toolkit of speed, grit, and an unbelievable work ethic. One of Highmore’s biggest assets is his speed though, and throughout his major-junior career, he used that to become a top goalscorer with the Saint John Sea Dogs of the QMJHL.
In his final season of major junior hockey, he registered 34 goals and helped the Sea Dogs capture a QMJHL championship. He then signed an entry-level contract with the Chicago Blackhawks and was assigned to their AHL affiliate Rockford Ice Hogs.
In the 2017-18 AHL season, Highmore scored 24 goals, attributing to his goal-scoring ability in the Q. Highmore struggled in Chicago though, bouncing back and forth between the Blackhawks and the Ice Hogs over the course of 4 years. Throughout his time with the Blackhawks, he registered 10 points in 72 games. Highmore was then traded to the Canucks in April of 2021 in exchange for Adam Gaudette.
He joined the Canucks lineup for the remainder of the 20-21 season and finished off the year with five points in 18 games. The change of scenery has already proved to be a big help for his NHL career. It was clear at the end of the season that he would be able to permanently slot himself into the lineup.
This season was a bit rocky from the get-go. Highmore played eight games in October before being sidelined with an upper-body injury that had him miss 24 games. Upon returning though, there were coaching changes, Bruce Boudreau was in, and Travis Green was out.
The coaching change turned out to be a positive for Highmore as he was then planted on a line with Tyler Motte and Juho Lammikko, which for a period of time ended up becoming one of the hottest lines in the entire league. Throughout 261-minutes of ice time together, they registered 14 goals and a Corsi-for percentage (CF%) of 44.5%. After Motte was traded to the New York Rangers at the trade deadline Highmore struggled to find his game and found himself on a cold streak.
Then in late March, he took a hit to the head from Colorado Avalanche tough guy Kurtis MacDermid. Highmore’s agent Allan Walsh was furious about the situation and blasted the NHL. “The National Concussion League is having another predictable evening,” he said “Headshot after high hit. Mark my words, this will all snap back on the NHL for ignoring player safety. BAN ALL HITS TO THE HEAD.” Highmore then proceeded to miss another month of action as a result of the hit.
With an expiring cap hit of $725,000, he will be a player who the Canucks can likely bring back on a cheap contract this offseason without any risk, and could even slot him on the penalty kill as well, given his defensive abilities.
More from CanucksArmy:
Uncategorized
Recent articles from Colton Davies