Matthew Highmore did more than was expected, but the jury’s still out on him: 2021 year in review By Stephan Roget
1 year ago
On April 12, alternatively known as Trade Deadline 2021, the Vancouver Canucks dealt Adam Gaudette in a straight-up transaction for Matthew Highmore. It was a deal that some found contentious at the time, and others were fairly neutral on. Even those who were fine and dandy with Gaudette’s departure couldn’t muster up that much excitement about the arrival of Highmore.
After 18 games with Vancouver, however, there’s reason for some cautious optimism about the Canucks walking away from this trade as the winners — and about Highmore continuing to play a role on the team for at least the one additional season he is under contract.
Emphasis, though, must remain on the caution.
Before the trade, Highmore was toiling away through a difficult third season with the Chicago Blackhawks, mustering just two points in 24 games and seeing his ice-time drop down to fewer than nine minutes per game.
For both the Blackhawks and Highmore — who managed four points in nine postseason games within the 2020 playoff bubble — it was a performance that had to be considered a disappointment.
The trade, however, seemed to kickstart something in Highmore. He more than tripled his point total over those last 18 games, and even though we’re still dealing with a fairly small scale and small sample size when we say that, it has to be seen as at least encouraging.
From NHL.com
Highmore’s increase in production wasn’t just in relation to his dismal season prior. His per-game rates skyrocketed well over and above his career averages.
Of course, that correlated to an increase in opportunity, with Highmore’s average ice-time almost doubling in Vancouver.
From Hockey-Reference.com
That huge leap in per-game production might lead some to worry about regression, but at age 25 Highmore might still be young enough to think of it as a miniature breakout. Far more concerning is a shooting percentage more than triple his prior average, which is almost certainly attributable to some major puck-luck. That’s not all that surprising to hear about a player whose three Vancouver goals all occurred in a roughly 48-hour span.
With that said, however, almost all of Highmore’s offensive contributions came from what are traditionally thought of as the “tough areas.” The vast majority of his shots, including those that resulted in goals, came from the net-front or the slot. That means that, regardless of luck, Highmore also put in the work to earn those three goals and five points. From HockeyViz.com
A deeper dive into Highmore’s advanced statistics might raise another red flag. His possession, shot, and chance-related metrics were all way down from his time in Chicago, which wasn’t exactly a stellar team itself during Highmore’s tenure.
Much of that can be attributed to the circumstances of joining a Vancouver squad just coming off a COVID disaster and suddenly forced into a dangerously compacted schedule, along with the string of decisive defeats that ensued.

From NaturalStaTrick.com (even-strength)
Another chunk of the questionable analytics might be blamed on Highmore’s deployment under coach Travis Green, which saw him a face slightly-tougher-than-league-average quality of competition. 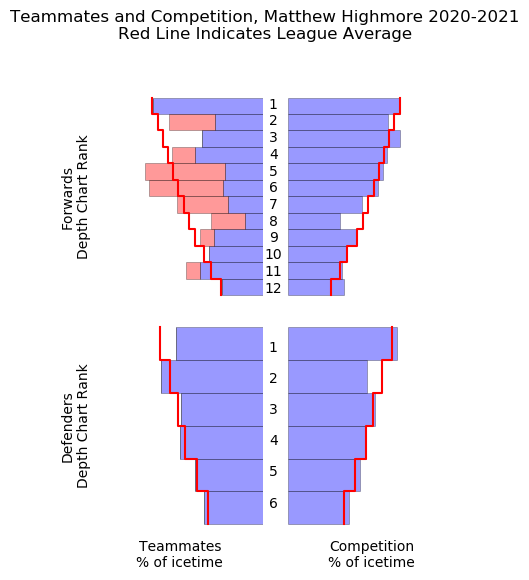 From HockeyViz.com
But some of it has to be on Highmore himself, because he was also gifted with some rather talented linemates in Vancouver, spending most of his minutes alongside either Bo Horvat and Tanner Pearson or JT Miller and Brock Boeser.

From Dobber’s Frozen Tools
That’s an unfortunate truth for Highmore truthers, because it might explain the heightened scoring, but it doesn’t excuse the porous defensive numbers.
In summary, those expecting Highmore to play enough of a role in 2021/22 to justify his one further year of $725K salary are probably going to be satisfied. His tenacity, hustle, and willingness to drive to the front of the net almost ensure that he’ll be able to play a passable energy role on the fourth line at a minimum.
Those expecting Highmore to continue producing at the roughly 23-point pace he did over these 18 games through a full 82-game schedule are almost certain to be disappointed, so adjust those expectations accordingly.
For reasons of honest comparison, we’ll note here that Gaudette managed four points through seven games with the Blackhawks, though he was often healthy scratched down the stretch. As a pending RFA who is very unlikely to be protected in the 2021 Expansion Draft, Gaudette’s future in Chicago remains murky at best.
Is that, combined with Highmore’s better-than-expected production, enough to declare Jim Benning and the Canucks as Trade Deadline winners?
We won’t go that far quite yet.
But we will agree that opinions of Highmore are certainly more high in Vancouver than they used to be, and that has to be considered a win in and of itself.
Uncategorized
Recent articles from Stephan Roget