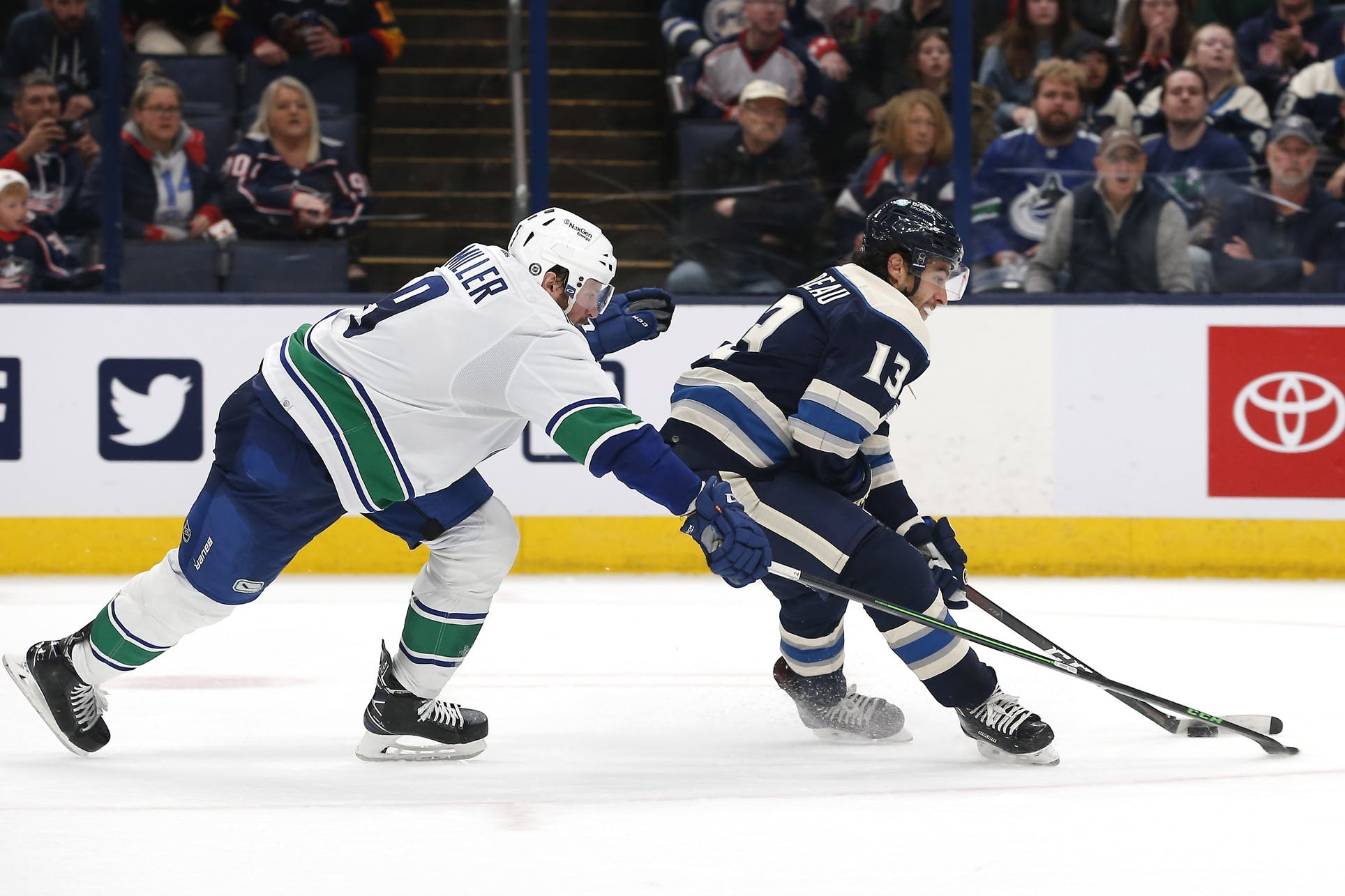 By Stephan Roget
2 months ago
Now is the winter of our trade content.
Yes, there’s a chill in the air, and yet there’s also an awful lot of heat coming from the local hot-stove. Vancouver Canucks-related speculation is rampant at the moment, and we’re back again with another Rumour Roundup to help make sense of all the talk.
Today, we’re looking at those rumours about ongoing trade discussions between the Canucks and the Columbus Blue Jackets that just don’t seem to be going away.
Frank Seravalli was the first to mention some serious “smoke” around the two teams, though he was iffy on the details and clear about his mention of Bo Horvat’s name as being pure speculation.
The next day, Elliotte Friedman echoed those sentiments, again mentioning Horvat specifically as the Blue Jackets’ most likely target.
Since then, no one has made much effort to debunk the rumour or expand upon it. But it hasn’t gone away, either, so it’s time to break out the depth charts and see if we can’t figure out what might be going on.

What’s in it for Columbus?

The Columbus Blue Jackets are in an odd place, franchise-wise. Most assumed that they had already begun the process of a full, tear-down rebuild. But then they went and landed the top veteran UFA this summer in the form of Johnny Gaudreau, along with a couple other key veterans, and now their timeline has shifted.
Joining Gaudreau in Columbus is the previously-acquired Patrik Laine. Between the two of them, they’re making an average of  $18.45 million a season to staff two-thirds of Columbus’ top line, but there’s just one problem: they’re both wingers.
In order to make a reasonable return on their investment, the Blue Jackets need someone capable of playing in between Gaudreau and Laine. Unfortunately, they’re coming up short.
Youngsters like Cole Sillinger and Kent Johnson are too unpolished to be relied upon now, and there’s no real guarantee that they ever get to where they need to be. More established types like Boone Jenner and Jack Roslovic have been doing their best to fit in, but none of them are built for top-line duty, either.
Ideally, if the CBJ are going to make the most of the most productive years on that Gaudreau contract, they’re going to want to find a capable top-line center sooner, rather than later.
And the Canucks might have not one, but two of those on offer.
Yes, Horvat’s name has been the one most frequently attached to the Blue Jackets, and it makes plenty of sense. He’s certainly scoring at a first line pace, and his sniping style may be the perfect fit for an elite playmaking winger like Gaudreau.
Horvat is a pending UFA, but we have to imagine that the Blue Jackets wouldn’t even consider trading for him unless an extension was in place. Given their place in the standings, they’re simply not in the market for a rental, and with no major re-signings on the immediate horizon, they’ll have the cap space to accommodate a Horvat raise.
But that’s not the only potential outcome of these trade discussions. The Blue Jackets could also take a look at the Ohio-born JT Miller, a player whose long-term status as a center is still highly questionable, but who did put up 99 points in that position just last year.
At first blush, Miller looks like less of a fit with Gaudreau and Laine than Horvat, but that might not be the case. Miller can score and make plays with roughly equal aplomb, and he could really mesh well with a playmaker on one side and a true sniper on the other.
If anything, a Gaudreau-Miller-Laine line is oddly reminiscent of the Lotto Line.
The Blue Jackets would have to swallow Miller’s extension as is, which they will have room for, but might be less willing to do than they would be with Horvat’s, as Miller is both older and presumably more expensive.
Then again, nothing beats home cooking, and the hometown factor could be an important draw.
Either way, suffice it to say that the Canucks and Blue Jackets have plenty to talk about.

What can Columbus offer the Canucks in return?