The Los Angeles Kings improved and will challenge the Canucks this season: Previewing the Pacific 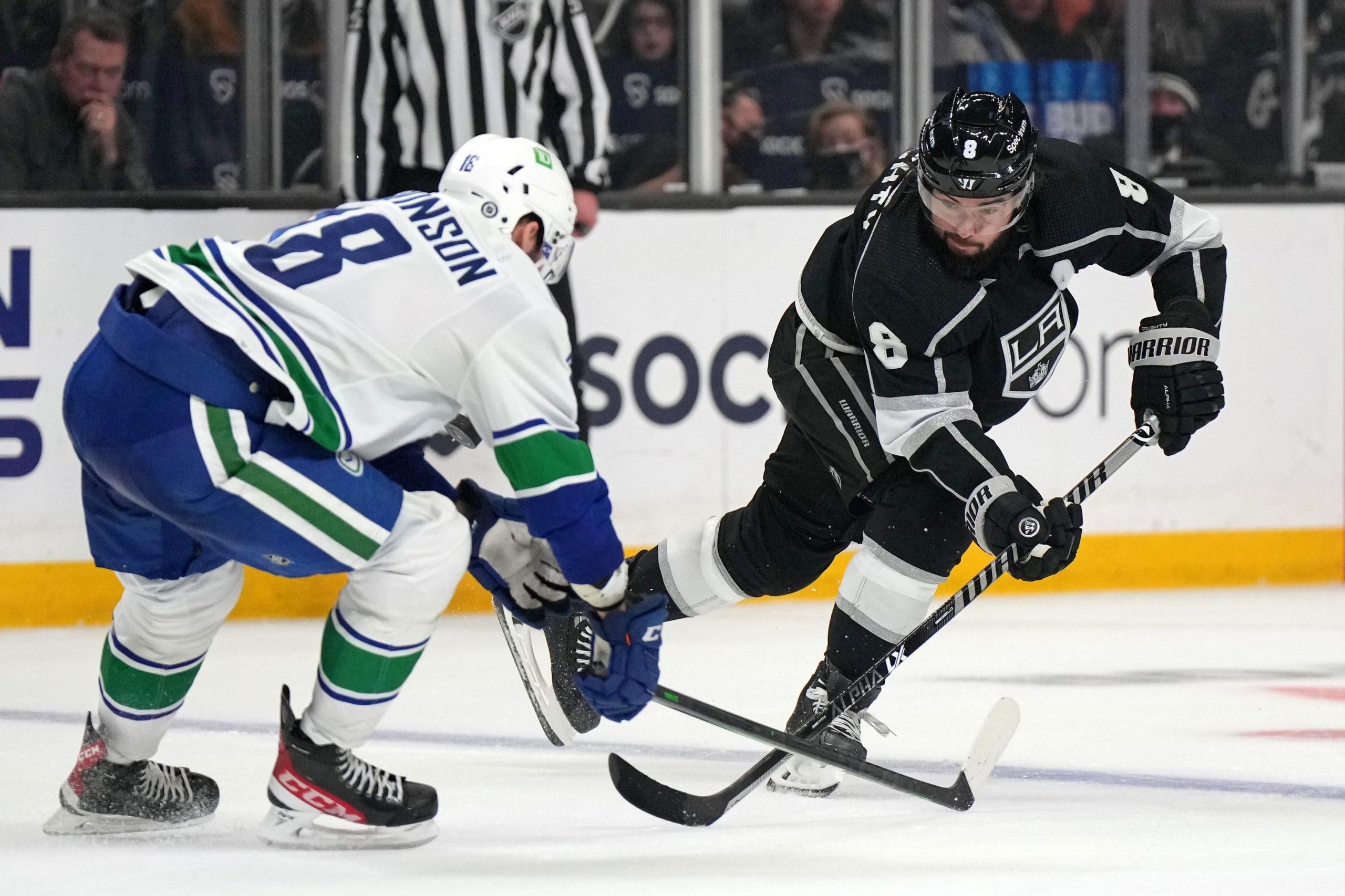 By Michael Liu
3 months ago
If there were one team in the Pacific Division that took a big step forward in terms of progress last season, it would be the Los Angeles Kings.
After not making the playoffs since the 2018 season and finding themselves in a bit of a limbo, Rob Blake and his crew have done a masterful job in cultivating a pipeline of prospects to build the future core. With the old cup run teams finally shifting out, it’s a new age for the Kings as fresh blood was infused into the lineup.
But are they genuine contenders for the Pacific Division crown? We’ll be taking a look at that, along with how the Canucks stack up.

The young forwards that the LA Kings are fielding have been a long time coming. With the retirement of Dustin Brown, only the ever-reliable Anze Kopitar remains as the sole forward over the age of 30. Everyone else up front is 29 years or younger.
And just because they’re young, doesn’t mean that they are inexperienced. The Kings have started weaponizing their glut of prospects and cap space this offseason to bolster this team. Kevin Fiala was brought in from the Minnesota Wild in exchange for a first-round pick and defence prospect Brock Faber.
The Swiss winger emerged as a borderline first-line option last season and looks poised to continue that production out on the west coast. His offensive play should mesh well with the excellent defensive work of centre Phillip Danault, who also put up a career-high in goals last season. As well, Fiala is reunited with former Predators teammate Viktor Arvidsson, another key veteran presence on this roster at the age of 29 years old.
The bottom six is still very much unknown right now, with plenty of players capable of nailing down a roster spot for the upcoming season. It projects to be a good mix of established middle-six talent like Trevor Moore and Alex Iafallo, as well as younger faces that have the potential to become future top-6 options. Rasmus Kupari and Arthur Kaliyev stand poised to improve on decent rookie years and move up in the depth chart.
That isn’t even getting into the prospects that still have yet to establish themselves as NHL regulars. Quinton Byfield unfortunately found himself hampered by injuries and buried down the lineup when he returned in the spring of 2022.
The former second overall selection has more than enough talent to be a game breaker in the NHL, and it will be interesting to watch how he is deployed this season and how he develops. Young guns Samuel Fagemo and Alex Turcotte have slipped a little in the Kings’ prospect pipeline, but both also stand a very good chance of cracking the opening night roster. It’s a wealth of riches for Los Angeles up front, with plenty more U23 talent that is just waiting for their moment in the limelight.

While most fans could be forgiven for thinking that the Kings’ defence corps consists solely of an aging Drew Doughty, there’s a lot more going on behind the scenes. In fact, the stalwart Doughty spent most of last season injured, undergoing wrist surgery as LA made their playoff push. Though he definitely isn’t the same player as before, the former Norris winner will definitely be a boon for the Kings as he returns in time for training camp.
What happened in his absence was the quiet emergence of Matt Roy and Michael Anderson. Roy put up the best statistical season of his career, controlling the play with excellent possession numbers while eating up 21 minutes of tough deployment ice time a night. He started approximately 55% of his shifts in the defensive zone. Anderson didn’t put up the same amount of points from the blue line, but contributed in a similar fashion as he took on 20 minutes of defence-heavy starts, all the while breaking even on his Corsi and Fenwick measures.
The back end still remains a bit of a mystery for the Kings, however. Alex Edler is back for another season and should provide more veteran depth, but players like Sean Durzi, Jacob Moverare, and Jordan Spence could realistically end up anywhere from the second pairing to the 7th defenceman. What’s nice for the latter three is the fact that they’re all under the age of 23, meaning that there is plenty of room for development and growth after already having solid minutes in the NHL.
Just to add a bit more competition though, the Kings’ prospects are making a push to be included on that opening day roster. Perhaps the biggest contender is Brandt Clarke, the former 8th overall pick wanting to make a strong impression here. Clarke’s puck-moving ability and powerplay prowess are something to behold but he adds even more to the right-side logjam that LA faces if he makes the roster. Helge Grans had an impressive year with the Ontario Reign, displaying his excellent vision and quick stickwork on defence. He too could be gunning for a roster spot, something that there doesn’t seem to be enough of in the Kings’ lineup.

Who is Jonathan Quick’s Successor?

That question is probably going to be the biggest thing holding the LA Kings back from true playoff contention. Quick had himself a bit of a renaissance last season after a rough three years prior. He posted a 2.59 GAA with a .910 SV%, something that the Kings really needed to backstop them into their first playoff appearance in four seasons.
But, Quick is already 36 years old and about to turn 37 in January 2023. He doesn’t have much longer to play at the level of a starting calibre NHL goalie. That means that Los Angeles really needs to find their long-term solution in net lest they waste some prime ELC years of their players.
During the shortened 2020-21 season, it looked like Cal Petersen would be that answer. In 35 appearances, he recorded an impressive 2.89 GAA on a .911 SV% for his first full-time spot in the NHL. The expectation was that he would steal the starting role long-term, but that has not happened. Petersen regressed hard, with the same GAA but on a .895 SV%. It leaves more questions surrounding the position, wondering if he can capitalize and bounce back after a tough 2021-22.
The goaltending spot also happens to be the one weakness in the Kings’ prospect pool. After lots of noise trying to move up and select Jesper Wallstedt in the 2021 NHL entry draft, LA finds themselves with Jacob Ingham and Lukas Parik as their top goalie prospects. Both have been a tad underwhelming in the minor leagues, and don’t project to be impact NHL starters or backups until at least a while down the line.

In all honesty, the Canucks are pretty evenly matched against the Kings. The forward core is comparable between the two sides in terms of both talent and potential. For Kopitar and Danault, Vancouver has Miller and Horvat. For Fiala and Arvidsson, the Canucks have Pettersson and Boeser. They might not be comparable players, but the impact they have on their respective teams is definitely similar.
The Canucks’ defence is also similar to the Kings’. Quinn Hughes, at this point in both his and Doughty’s career, should be more than a match for the #1 dman on LA. Moving down, Ekman-Larsson, Tyler Myers, and Luke Schenn have the experience of munching minutes at the NHL level with the offence to go with it. The Kings are still figuring out that latter part.
Vancouver probably has a slight edge between the pipes. There’s no question that Demko is the better goalie going into the future, and the only question here should be if Quick can sustain his level from last season. If he can’t, then eyes have to fall upon Cal Petersen to see if he can step to the plate for the Kings.
One of the biggest separators is the age of the two groups. While the top-end talent is comparable between the Kings and Canucks, the sheer depth of LA’s prospect pool and the youth in their lineup gives them a lot more young talent to call upon. There’s room for growth amongst the Kings lineup, and it’s something that the Canucks don’t necessarily have. Particularly in the defence area, Vancouver could sorely use a bonafide top-4 talent while Los Angeles has an abundance.
That aspect is what makes the Kings such a fearsome team going into the future. With a pipeline as packed and as deep as theirs, they can swing them in trades to bolster the lineup today or marinate them for future impact. LA is poised to be a contender for a long time running down the line if this keeps up.
For this season though, the Canucks and Kings should be neck and neck in the playoff race of the Pacific. Don’t be surprised to see these two teams dueling it out in the standings deep into March.
Content
Recent articles from Michael Liu